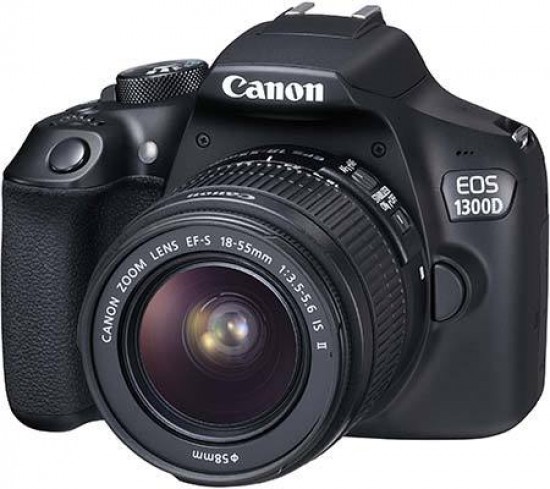 The Canon EOS 1300D (otherwise known as the Digital Rebel T6 in North America) updates the EOS 1200D / Rebel T5 as Canon’s entry-level DSLR marketed squarely at first-time DSLR buyers. The new camera is more evolution than revolution though, as it carries over many of its predecessor’s key features. Consequently the 1300D gets the same 18MP APS-C sensor paired with a near-identical Digic 4+ processor, resulting in a modest 3fps continuous shooting rate and a maximum standard sensitivity of ISO 6400.

Full HD video at 30fps is available, as is a Video Snapshot mode that combines short video clips into a montage sequence. The 1300D also sports a higher resolution 920k-dot LCD screen, but its biggest improvement over the 1200D is the addition of built-in Wi-Fi with NFC pairing. Now you’ll be able to wirelessly transfer images to a mobile device for sharing, as well as remotely control the camera from a smartphone or tablet.

However, such marginal size and weight differences have little impact in real world shooting. Here the 1300D’s carbon fibre polycarbonate body feels reasonably solid and well built, though predictably for an entry level Canon DSLR, it isn’t weather sealed. If that’s a deal-breaker for you and you can’t stretch to a water and dust-resistant EOS 70D, then the weather-sealed Pentax K-S2 is worth considering. The 1300D also works well ergonomically, with a decent-sized rear thumb rest and the exposure compensation and playback zoom buttons positioned conveniently on either side of it. The main hand grip is nice enough, but the finger recess is a little shallow, which can make it difficult to grasp comfortably if you’ve got larger hands. Still, given the 1300D’s light weight, this isn’t a major bugbear.

A primary selling point of the Canon EOS 1300D to first time DSLR buyers is its ease of use. Little has changed in this respect from the 1200D, but that’s no bad thing. The 1300D still gets dedicated ISO and white balance buttons on the rear panel – physical controls you won’t find on a Nikon D3300 – while other key shooting settings like file quality and exposure modes can be accessed easily by pressing the Q button which activates the quick-access menu. This will also let you adjust the +/- 5EV of exposure compensation, but it’s quicker and easier to set this by pressing the dedicated exposure compensation button located immediately above the Q button whilst rotating the single, top-panel control wheel.

Another aspect of the Canon EOS 1300D which isn’t immediately intuitive is the mode dial. It’s cluttered with various scene mode settings, including Night Portrait, Food, Sports, Macro, Landscape, and Portrait presets. There’s also a Creative Auto mode that operates exactly as regular Auto mode, except you control the extent of background blur you’d like behind your subject by adjusting a virtual slider. All this does is adjust the lens aperture, so once you’ve learnt about aperture, good old aperture priority mode renders Creative Auto pointless. Aside from the usual selection of auto, semi-automatic and manual modes, the 1300D’s mode dial also includes a video mode and a Flash Off mode, whereby the camera shoots automatically but won’t fire the flash; useful in museums or religious buildings.

Returning to the rear panel and, along with the dedicated ISO and white balance buttons, the 1300D also offers a convenient drive mode button. This lets you choose between single shot, continuous, self-timer with a 10-second or 2-second delay, and also a continuous self-timer function where the camera will snap a burst of shots after an initial delay. Standard continuous shooting speed is unchanged from the 1200D and is still a rather sluggish 3fps, mainly due to the 1300D using essentially the same image processor. The 1300D does get a Digic 4+ chip compared to the 1200D’s plain Digic 4 device, but the only obvious enhancement this brings is an increased buffer capacity. Where the 1200D could only manage to shoot a burst of 69 JPEGs at 3fps, the 1300D can fire off 1110 JPEGs, though still only 6 consecutive RAW images. It’s quite an increase, but upping the burst shooting speed to 5fps to match the Nikon D3300 would have been more useful.

Another area where the new Canon still trails the two year old Nikon D3300 is video, although the difference is slight. Both cameras will shoot Full HD 1920 x 1080 resolution, but where the D3300 can do so at 60fps, the 1300D can only manage 30fps. Shooting a video first requires you to rotate the main mode dial to the video position, where you can then press the Live View button located alongside the viewfinder to start and stop recording. The 1300D also includes a Video Snapshot feature, whereby the camera will record video clips lasting two, four or eight seconds and compile them into a Video Snapshot Album (a montage sequence) with the option to add your own background music.

While most of the hardware inside the Canon EOS 1300D has been carried over from the 1200D, the new camera does sport an uprated LCD monitor. The 3-inch size remains the same, as does the 170-degree horizontal and vertical viewing angles, but the 1300D’s monitor boosts resolution from a paltry 460,000 dots to a more respectable 920,000 dots. This is particularly useful when shooting close-up shots using live view, where focussing accuracy is critical. Sadly, the screen doesn’t feature touch sensitivity. This makes sense in terms of cost cutting, but it isn’t such a smart move when you consider a significant portion of 1300D buyers are likely to be young first-time DSLR buyers used to touch-driven photography.

But the most significant new element of the 1300D is its built-in Wi-Fi with NFC pairing. The system uses Canon’s Camera Connect mobile app to enable wireless image transfer and remote camera control. Connecting your smart device is painless, and once linked, the 1300D can be controlled remotely with very little signal lag. The app also lets you control shooting functions like ISO sensitivity, exposure compensation and the drive mode. When it comes to sharing your shots, the Wi-Fi link transfers a full resolution image almost instantly, although image previews do take a couple of seconds per shot to preview properly when scrolling through your memory card’s images. Considering that the Nikon D3300 requires you to purchase a WU-1a dongle to get Wi-Fi connectivity, Canon’s built-in system is certainly a step up in value and convenience. However it’s worth remembering that, as extra features go, Wi-Fi is no longer cutting edge, high-end tech. After all, a basic Canon IXUS 180 compact camera packs Wi-Fi with NFC for less than £130.

When it comes to shooting, the Canon EOS 1300D will switch on and fire a shot in around 0.7 seconds, although it takes a second or so longer for the LCD screen to display anything. Focussing speed is largely dependent on your choice of lens. Our 1300D test sample came paired with Canon’s excellent 18-55mm IS STM optic, which is the kit lens for the 750D. The 1300D’s kit lenses (for the UK market at least) are either a basic, non-stabilised 18-55mm lens, or the 18-55mm IS II lens. Given the 1300D’s mediocre high ISO performance, going for the non-IS lens and relying on faster shutter speeds and higher sensitivities isn’t advisable. The 18-55mm IS STM lens is smoother and quieter to focus, but you’d need to buy the camera body and this lens separately; a combo that costs £90 more than the 18-55mm IS II kit, and that’s a tough price hike to justify to a beginner. It’d make more sense to put the same money towards an entry-level telephoto lens in order to experiment with shallow depth of field effects.

Whichever lens you choose, the Canon EOS 1300D’s 9 AF points are well spread across the image frame, and though only the central point is the more accurate cross-type, autofocussing in our hands was quick and mostly accurate in all but the darkest conditions. Switch to live view and things get much slower though, with contrast-detect focussing requiring a second or so to establish maximum sharpness and correct focus. However, this needn’t be a major issue when using live view to compose and shoot shots like close-ups, where careful consideration and an eye for detail are more important than speed.

Last but not least is battery life, which is unchanged from the 1200D at 500 shots from the LP-E10 rechargeable Li-ion power pack. That’s pretty good when compared to the 750D that can only manage 440 shots per charge, however, as with so many of the 1300D specs, it lags way behind the D3300’s impressive 700-shot CIPA rating. It’s also worth noting that the 1300D’s battery compartment on the bottom of the camera also contains the memory card slot, which is a little fiddly to access and can also be blocked completely by larger tripod mounting plates. The D3300 and 750D’s conventional side-accessed card slots are much more convenient.