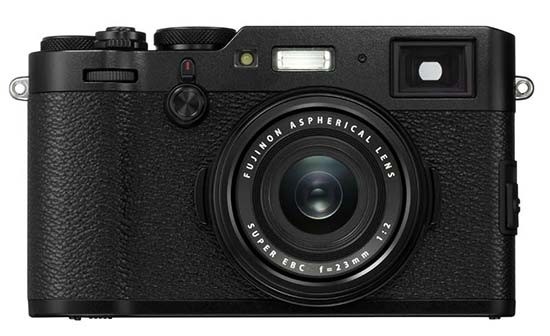 The Fujifilm X100F is the latest in Fujifilm’s series of fixed-length premium compact cameras. It features the latest generation X-Trans CMOS sensor, which has 24.3 megapixels - a jump up from the 16.3 megapixel sensor of the X100F’s predecessor, the X100T. While a number of notable improvements have been made across the specifications, the same 23mm f/2.0 lens is found on the front of the camera - that offers a classic focal length of 35mm (equivalent), making it an ideal camera for street photography and the like. Other new features include the latest processor, the X Processor Pro, a new 91-point autofocus system, an expanded native ISO range, and a simpler design and layout to make it easier to use. Notably however, there’s still some limitations, the screen is still fixed and not touch-sensitive, while the video functionality is limited to Full HD. The Fujifilm X100F will be available in both black and silver for a suggested retail price of £1249.99 / $1299.99.

Outwardly, the shape and size of the X100F is almost identical to the X100T. In short, it’s instantly recognisable as an X100 model. If you go for the black and silver version that was supplied to us for the review, you end up with something that looks very similar to an analogue camera, the retro styling being a major selling point of the brand.

On the back of the Fujifilm X100F, buttons and dials have been simplified to give more room to your thumb, while the majority of the buttons have been shifted over to the right hand side to make changing settings quicker. There’s also a new joystick which you can use to set AF point. The joystick is easy to find when you’re using the viewfinder, and makes for a pretty quick way of choosing the AF point you need.

Also on the back of the camera is a four way navigational pad, which can be customised to control the settings you use most often, or feel are most sensible for these keys. There’s a Q button which gives you access to a group of commonly used settings, which saves you having to delve into the main menu. To make changes, you scroll to the setting you want to change using the joystick, then use a small scrolling dial to make the change. You can customise the quick menu to take out or add in settings which you feel are most appropriate.

The small scrolling dial can also be pushed in, which when in shooting mode magnifies the scene, which is useful for critical focus. Other buttons include a playback button, a delete button and a button for changing the display.

On the back far left of the Fujifilm X100F is the viewfinder. The X100 series has a very special viewfinder, in that it is both optical and electronic. You can switch between the two offerings via a dedicated switch on the front of the camera. There are advantages to using both - with the optical viewfinder you can see around the edges of the frame, which can be useful for street photography as it allows you to assess what’s about to move into the frame. On the other hand, the electronic viewfinder allows you to see any settings changes you have made, as you make them - it’s great to have both options, and I have used both frequently.

Either way, the viewfinder is bright and clear and offers a great view of the scene. The electronic finder offers no noticeable lag, and it’s probably this that I used more than the optical finder on most occasions. Just by the viewfinder itself is a button which allows you to choose how the viewfinder display works. You can set the finder to always be on - and the screen off - you can set the screen to be on, and the viewfinder always off, or you can set it to automatically transition between the two when you lift the camera to your eye. The latter makes for a very fluid and natural movement, but you may want to switch off the sensor if you’re trying to take a photo from waist level.

Speaking of shooting from waist level, it’s disappointing not to have a tilting screen here on the X100F, especially considering the X70 has one. This makes it difficult to shoot from awkward angles, or discreetly if you’re photographing on the street. The screen itself is excellent, and shows a clear and detailed view of the scene in front of you (or your images in playback), but it would also be better if it was touch sensitive. Again, the X70 has this functionality so it’s a little tricky to know why it was omitted from the X100F.

Setting the AF point via the joystick is very quick, but it’s still not as quick as a simple tap to the screen. When you’re working on the street, it doesn’t take much to miss the definitive moment, so being able to change the AF point in the quickest way possible would definitely have been welcomed.

The shutter speed dial has an A for automatic, and then goes from 1/4000 up to 1 second, and then T (for time) and B (for bulb). If you select T, you can use the scrolling dial on the back of the camera to set an exposure time of up to 30 seconds. If you select B, the shutter will remain open for as long as you hold the shutter release down.

A new addition for the X100F is that the shutter speed dial now incorporates an ISO dial. To access it, you need to lift the shutter speed dial and twist. It’s a little fiddly to get used to at first, but after a few attempts you start to perfect the motion. Using this dial, you can choose between L (expansion setting of ISO 100), automatic, high (expansion setting of 25600 or 51200), or from the native range of between ISO 200 and 12800.

Also on top of the camera is a function button, which can be set to a setting of your choice - by default it accesses “photometry”, which is Fujifilm’s term for metering.

On the front of the Fujifilm X100F, there’s another small scrolling dial, which can be used when you’re moving through images in playback. There’s the level for switching between the EVF and the OVF, which also houses a small button inside the switch - which again can be customised to your preferred setting. Around the lens you’ll find the aperture ring, something which is common amongst Fuji cameras (or, more accurately, lenses). You can choose between f/2 up to f/16, with full stops marked and 1/3rd stops also selectable. You can also set the aperture ring to “A”. Although there’s no fully automatic “mode” on this camera, you can in effect set all the different parameters to automatic if you want to.

Autofocus has been improved since the X100T, and it’s extremely quick to lock onto the target. It’s also extremely rare to     display a false confirmation of focus. In lower light conditions, the focus assist lamp comes into play to help you to lock onto focus - it can take a little longer to lock on, but again generally it always gets there. You may want to consider turning the focus assist lamp off if you’re shooting somewhere discreet - but be aware that focus may not be acquired quite so easily.

When it comes to tracking focus, the Fujifilm X100F does reasonably well at tracking a slow moving subject that is moving in a predictable pattern. Given the type of camera that it is, it’s not particularly designed for sports or action photography, though.

Using the camera is quick, with shot to shot time very rapid. You can also move through images in playback very quickly with very little lag or delay. The new X Processor Pro seems to do an excellent job of making the camera an overall very pleasant user experience.

The Fujifilm X100F has both a mechanical and electronic shutter. That means that you can use very fast shutter speeds with the electronic shutter, which is useful when photographing at wide apertures in bright light. Alternatively, you can also switch on the inbuilt ND grad in the main menu if you want to shoot wide open and maintain correct exposures.