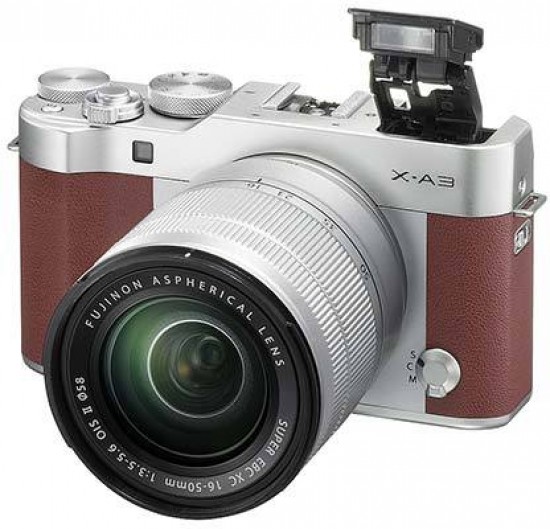 The new Fujifilm X-A3 follows on from the X-A2 camera, sitting at the entry-level of Fujifilm’s range of compact system cameras. It features a 24 megapixel APS-C sized sensor, but unlike most of the other cameras in Fujifilm’s X range, the sensor is not an X-Trans device. There’s also a touch-sensitive tilting screen, inbuilt Wi-Fi, Full HD video recording, and a maximum (expanded) ISO setting of 25600. The camera is an exclusive model to Jessops in the UK, who loaned us our sample of the Fujifilm X-A3 for review. The Fujifilm X-A3 costs £499 / $599.

The X-A3 is the smallest of Fujifilm’s compact system cameras, but it follows the same kind of design principles, being retro or old-fashioned in appearance. It’s available in a variety of colours, including the pink and silver version we were loaned for review. The pink part is textured to give a leather-like appearance which adds to a feeling of quality and also helps it to feel secure in the hand.

To add to that feeling of security there’s a protruding grip on the front of the Fujifilm X-A3, it doesn’t protrude hugely, but it gives you enough purchase when holding the camera - your forefinger should sit nicely in position for the shutter release on the top plate.

On the top plate itself, you’ll find the shutter release, which is surrounded by the on/off switch, as well as a mode dial for choosing between the exposure modes on offer, and a second dial which has different functions depending on the shooting mode you’re working in. The mode dial has the usual range of automatic and semi-automatic options (including P, S, A and M), but also has a few scene options, plus “Advanced Filter”, and a mode labelled “C” which allows for a group of custom settings to be saved and quickly returned to when you need them.

There’s a small function button, just near the shutter release, which you can assign to whichever function you feel is necessary - by default it accesses ISO which is helpful considering there’s no other direct button, but you could change it to something else if you prefer. The secondary dial controls shutter speed if you’re photographing in manual mode, while it adjusts exposure compensation in aperture or shutter priority. It can also be used to scroll through pictures in playback, or some of the options in the quick menu.

The Fujifilm X-A3’s flash is housed on the top of the camera, being lifted via a small switch on the left hand side of the camera, it is lifted on stalks, which helps the flash to clear the kit lens (if you’re using it), but you should be aware that if you leave the lens hood on, a shadow is likely to appear on your images. You can change the flash mode from the quick menu,  while you can also switch on red eye reduction from the main menu - useful for photographing portrait subjects.

A small switch on the front of the Fujifilm X-A3 allows you to change between focusing options - manual, single and continuous.

Moving to the back of the Fujifilm X-A3 and there’s a fairly standard array of dials and buttons which help you to quickly change settings. There’s a small dial, which is mostly tucked away into the camera body, which you can use to set a variety of things, depending on the shooting mode that you’re in. So, if you’re working in aperture priority, you can use it to set aperture. It works in a similar way to the larger dial on the top of the camera, but in play back you can use it to zoom in and out of images, which is handy for checking critical focus. You can also use the dial in conjunction with the quick menu.

To access the quick menu, press the small Q button found in the bottom right hand corner of the back of the Fujifilm X-A3. Here you’ll find a number of commonly used settings, saving you from having to navigate the main menu - options here include white balance, ISO, film simulation and more. Other buttons on the back include a playback button, a video record button, and a display button which allows you to change the way the live view looks, as well as how images are displayed in playback.

There is a four way navigational pad surrounding a central “OK” button, which also acts a menu button to allow you to access the Fujifilm X-A3’s main menu. Each of the four navigational keys doubles up for a different function too - the right button accesses white balance, the left button the timer mode, the down button drive mode and bracketing, and the up button AF. If you press the up button, you can then use the other directional buttons to move the AF point to the place you want to use it.

The Fujifilm X-A3’s screen is touch-sensitive, which means you can use it to set the AF point too, or even fire off the shutter release. On the left hand side of the screen you’ll see a small icon which if you press allows you to choose between using the screen to set AF point, or to have it focus and then take a picture. If you prefer, you can turn off this functionality altogether, but it’s much quicker than using the buttons to set the point. The screen is mounted on a hinge which allows it to be tilted. You can angle it slightly downwards, and if you pull it out from the hinge slightly, you can face it all the way forwards. Once you’ve done this, the display will automatically switch so as to appear the correct way round for taking selfies - it will also automatically hunt out faces to give focus priority to.

You are able to shoot in both JPEG and raw format with the Fujifilm X-A3, but it should be noted that not all functionality will be available in raw format. For instance, the lowest sensitivity you can shoot at in raw is ISO 200 - you will need to switch to JPEG only shooting if you want to shoot at ISO 100. The same is true of the very highest ISO sensitivity settings, ISO 12800 and ISO 25600. Advanced filters can also only be shot in JPEG, leaving you with no “clean” version should you need it down the line.

There’s no viewfinder for the Fujifilm X-A3, but there is a hotshoe on top of the camera if you wanted to purchase one as a separate accessory.

As standard, the Fujifilm X-A3 comes with the 16-50mm f/3.5-5.6 OIS II kit lens. It’s a good lens to get you started with, and is certainly capable of taking some nice pictures. You can buy quite a variety of different lenses for the X system now, including lots of prime and zoom lenses, which is something to think about once you’ve become acquainted with the system.

In good light, focusing is very snappy, locking onto the target almost instantly without too much back and forth motion. In darker conditions, it’s a little slower and relies heavily on the focusing light which is emitted from the front of the camera - this is something you may want to turn off for some subjects, but it certainly helps to acquire focus. The camera generally manages to get there in the end, without displaying a false acquisition of focus, but it can sometimes fail when you’re photographing something which is of low contrast.

Continuous autofocus can keep up with reasonably slow moving subjects which are moving in a predictable pattern. It struggles more with faster or erratically moving subjects, but it’s fair to say that this is not a camera which is designed with fast action or sports photography in mind.