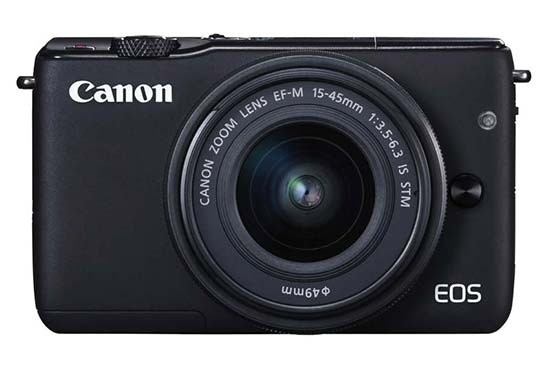 Initial impressions of the Canon EOS M10 camera are largely favourable. Despite its all-plastic construction and being one of the smallest compact system cameras on the market, the EOS M10 feels fairly solid, measuring 108 x 66.6 x 35 mm and weighing 301g. Unlike a DSLR and most CSCs, we did manage to squeeze the EOS M10 with the new new EF-M 15-45mm f/3.5-6.3 IS STM collapsible standard zoom lens attached into a jacket pocket, despite it not being particularly comfortable to do so. Our black version also had a slightly roughened non-slip feel to its surface, subconsciously recalling a pro-grade DSLR, although there's no proper handgrip as on the more expensive EOS M10, which makes it more difficult to use with larger, heavier lenses.

The EOS M10 has an APS-C sized sensor pumping out 18 megapixel images, with the choice of shooting in 14-bit Raw as well as JPEG, or both in combination. Choose any Raw option though and you miss out on the ability to automatically apply digital filter effects in-camera - those options are simply de-selected on the EOS M10’s on-screen tool bar.

The LCD on the back of the Canon tilts up 180 degrees,, although it cannot be tilted down or swiveled to the side. The LCD is three inches in size and boasts a high 1040K dot resolution. Furthermore it’s a touch screen, though you wouldn't automatically know it from looks alone, as we also get the basic physical controls ranged alongside it. When tilted to the maximum 180 degrees, the camera automatically launches the Self Portrait Mode for easier selfies, which you may or may not find appealing.

One other major thing that the Canon M10 has going for it is that it is an ‘EOS’ camera. This means in theory that users can utilize any of its manufacturer’s 70+ EF lenses and accessories, the former screwed into place with the aid of an adapter ring, albeit with a resultant ‘front heavy’ appearance. There’s also the fact that said adapter costs an additional £160. Also shared with EOS DSLRs in the Digic 6 processor that makes up the guts of the EOS M10, and the fact that sensor cleaning takes automatically place upon powering down the camera, not something typically witnessed with competing CSCs.

There is also a pop-up flash built into the EOS M10’s body, which will please the beginner target audience, although there's no flash hotshoe as on the EOS M3. The EOS M10's pop-up flash is convenient, but only has a weak guide number of 5, along with a recycle time of 3 seconds.

From the front then, the EOS M10 more closely resembles a PowerShot camera than an EOS DSLR, rounded corners stopping it looking completely boxy and in fact going one further and imbuing it with a smidgeon of style. The form factor is compact enough that the EF-M lens mount swallows up roughly half of the faceplate, with a porthole for a self-timer/AF assist lamp located top right, and beneath that a springy lens release button.

On top the shutter release button is encircled by the only control dial. Alongside is the small video record button. As one might expect, there are several video quality selections to choose from, running the gamut from the Full HD 1920x1080 pixels at a maximum 30 frames per second, stepping down to the industry standard 25fps and 24fps as our next options, and then on to 1280x720 pixels at a cinematic 50fps as a further choice. The lowest resolution video option is a bog-standard 640x480 pixels, though again at 25fps.

The only other controls on top of the EOS M10 are the shooting mode dial which encircles the tiny Power On/Off button. Rather than cram this shooting mode dial with eight or 10 settings, Canon has pared it back to what can barely be described as the ‘essentials’. There are three settings – two for stills, and one for video – and that’s it. The two photo settings are, firstly, for ‘Scene Intelligent Auto’ – the camera’s default setting which, as it sounds, is pretty much point-and-shoot all the way, the EOS M10 recognizing common scenes and subjects – which it does consistently and reliably – and optimizing the results for you. The second setting on the dial, manual controls looking conspicuously absent at this stage, is for ‘Creative Auto’.

This mode is actually where the program, shutter priority, aperture priority and manual options are ‘hidden’, though the first thing we’re presented with on selecting Creative Auto is a range of digital filter effects. It seems that, with the EOS M10, as with the original EOS M, Canon is really attempting to ensnare the mass consumer market and those trading up from a pocket snapshot or a smartphone wanting better quality shots, rather than its photo enthusiast heartland per se. At first glance the EOS looks and feels unthreatening, and that is deliberately so.

Press the ‘Q Set’ button at the centre of this backplate pad and via the on-screen options you can choose the AF method – either face recognition/subject tracking, multi zone or single point AF – and select image quality and compression level. The latter ranges from Large compression level, full resolution JPEG through to Small 720x480 pixels JPEG, along with Raw and JPEG plus Raw capture options. You can also select the flash options, though these are limited to auto flash, forced fill-in flash, or off. There’s additionally the ability to blur the background of a shot selectively using an incremental four stage on-screen slider to determine the degree of de-focusing.

Next up at the bottom of the same on-screen toolbar are the seven creative filters, which admittedly are fun and effective in smaller doses. Provided here are a grainy B&W option, the self-explanatory soft focus, the perspective warping fish eye effect, a vivid ‘art bold’ effect, a washed out ‘water painting’ effect that is rather insipid, a ‘toy camera’ Lomo-like vignetting effect, and the ubiquitous tilt and shift lens ape-ing miniature effect, which provides a narrow band within which the image is sharply focused. Users can shift this focus area selector up or down the screen, thereby biasing a particular portion of the shot.

It’s only after playing with the camera for a little while that it becomes apparent that a finger tap of the ‘CA’ mode icon in the top left of the LCD screen reveals a hidden cornucopia of further shooting modes.

At first those revealed are rather uninspiring scene mode-type icons for portrait or landscape shots, close up images, sports, night portrait, handheld night scene, plus a backlight adjustment/HDR feature which takes three consecutive shots to even up otherwise tricky exposures. It’s only when you come to the end of tabbing through these options with successive finger prods that the hands-on quartet of manual, aperture priority, shutter priority and program finally reveal themselves. Apart from the obvious, it’s only in these modes that we appear to be able to manually adjust the likes of ISO, and again this is with a finger tap of an on-screen icon rather than the press of any ‘hard’ control. Here light sensitivity runs incrementally from ISO100 through to ISO12800, which isn’t a bad range by any consumer camera standards. There's even a faster boosted setting of ISO 25600 buried deep within the menu system.

In the above modes we’re also entrusted with an on-screen slider for adjusting exposure, the options running +/- 3EV. A press of the actual ‘Q.Set’ button on the backplate, or the small ‘Q icon top right of screen in the above modes, and we’re also presented with a range of ‘Picture Style’ settings familiar from Canon DSLRs, for in-camera adjustment of shots pre-capture.

A press of the top plate on/off button, which is recessed level with the bodywork, powers the camera up for action in around two seconds. Squeeze the shutter release button and the EOS M10 focuses in under 1/2 second, much quicker than the original EOS M. Whether you’re shooting a highest resolution JPEG or JPEG and Raw in combination, there’s barely a noticeable difference in the time it takes to commit either to removable media – here an SD card of every description, now more conveniently housed in its own compartment on the side of the camera, rather than with the rechargeable lithium-ion battery at the base.

With two tiny holes for the stereo microphone rounding off the top plate features, the rest of the controls on the backplate of the EOS M10 likewise look familiar – or will do so to anyone used to a digital snapshot camera of any description. The Menu button calls up a series of folders covering both basic camera operation and set up.

Sitting beneath we have the multi-directional control dial. Ranged around this are Exposure Compensation, Flash, Info and AE Lock options. At the very centre is the ‘Q.Set’ button for implementing the various changes applied throughout the course of handling the camera, and exploring the options offered within, again as previously described above.

The EOS M10's wi-fi capabilities allow you to share images during playback via the dedicated button on the side of the camera. Simply enter a nickname for the camera and five more icons then appear, connecting the EOS M10 to another camera, a smartphone, a computer, a printer and the Internet respectively. Setup is relatively straight-forward for each scenario, although you'll need a basic understanding of the protocols involved. Note that you need to install the dedicated and free Canon CameraWindow app to connect the EOS M10 to an iOS or Android device.

The EOS M10's wi-fi functionality is employed to tag your images with GPS data recorded by your smartphone ( latitude, longitude, altitude and shooting time) via the Canon CameraWindow app, which effectively replaces a more conventional built-in GPS system. We actually prefer having GPS built-in to the camera rather than having to sync it with an additional device, so in this regard the EOS M10 doesn't compare well with rivals that offer this feature, although it does side-step the issue of negatively affecting battery life. The EOS M10 also features NFC (Near Field Communication) technology (the same technology that's used for mobile payments), which allows you to connect it to a compatible Internet enabled device or another NFC-enabled camera by simply tapping them together.

The Info button toggles through the various display modes on the LCD screen, including a useful control panel that, as the camera is touch-sensitive, makes it easy to quickly change the key settings.

With METAL lugs for attaching a camera strap provided either side of the EOS M10, on the left hand flank – if viewing the camera from the back as the user will be doing when engaged in operation – we find an expected AV/USB output and a HDMI port. Above is a switch for popping-up the built-in flash, and underneath is the new memory card slot. Over on the right flank is the aforementioned Wi-fi button and a discreet logo denoting the EOS M10's NFC connectivity.

The base of the camera meanwhile features a screw thread located directly behind the lens mount for the attachment of a tripod, and, over to one edge we naturally get the compartment for the battery, which offers a lifespan of 255 shots. Unlike an increasing number of compact system cameras, we do actually get a standalone mains charger with the EOS M10, so the battery can be removed and charged independently of the body, which means that if you do sensibly invest in a spare, the camera isn’t tied up each time you need to re-charge.