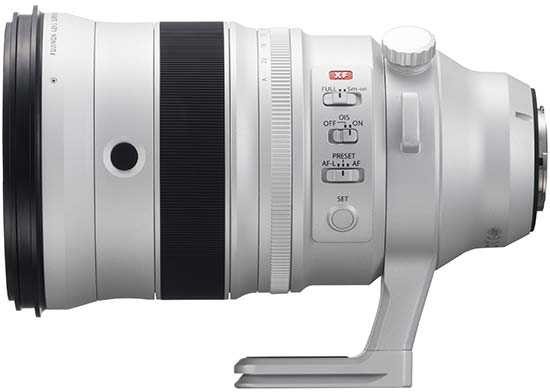 The XF 200mm F2 lens offers an angle-of-view similar to that of a 305mm lens in a 35mm system, which can be extended to 427mm using the XF 1.4x TC WR teleconverter that's supplied as standard in the box.

The Fujifilm XF 200mm F2 R LM OIS WR is an undeniably massive telephoto lens, especially with the huge lens hood attached, weighing in at 2,265g, measuring 20cm in length and dwarfing the new X-T3 camera body that we tested it with.

It's officially now the largest and heaviest XF lens currently available, although if you compare the XF 200mm / X-T3 combination to the Canon or Nikon DSLR equivalent, it's still significantly lighter and smaller overall. So much so that you can comfortably use it hand-held for a while, although it's ideally best mounted on a monopod or tripod. 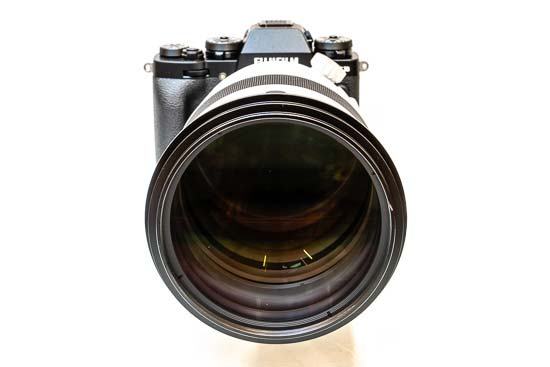 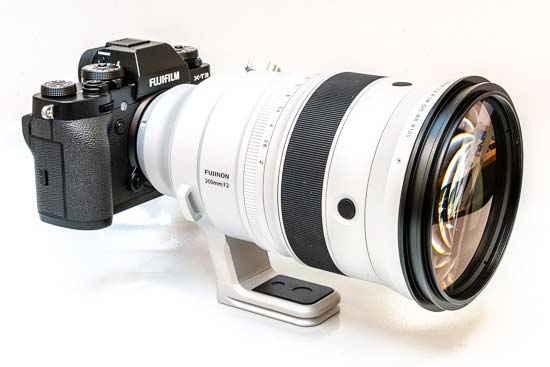 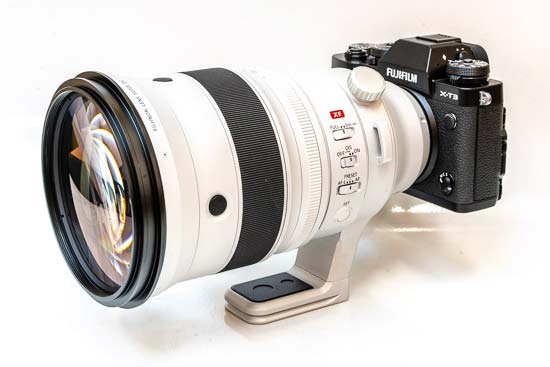 The overall build quality is outstanding, easily the best XF lens that we've tested, with a smart matt silver finish that looks great in the flesh and is claimed to reduce overheating in hot conditions.

The Fujifilm XF 200mm F2 R LM OIS WR lens also boasts a brass mount, magnesium alloy construction, and a massive, non-rotating 105mm filter thread. The lens is weather sealed at different 17 points and can withstand temperatures down to 14°F for use in adverse conditions. 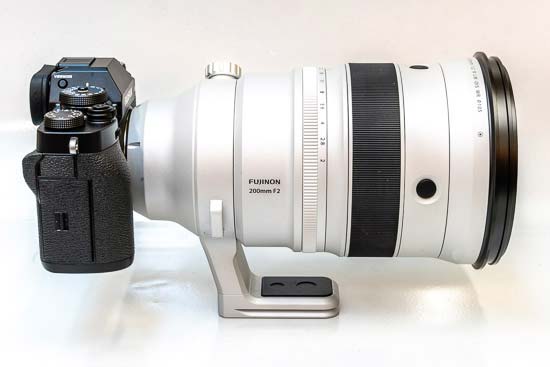 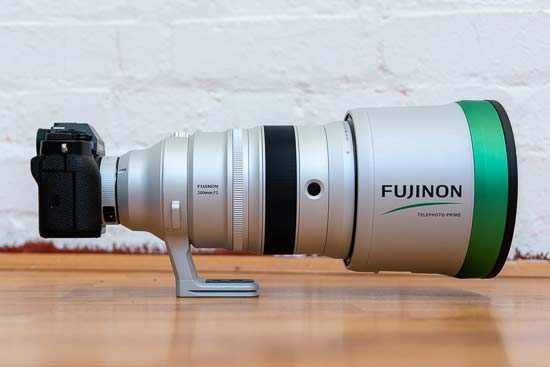 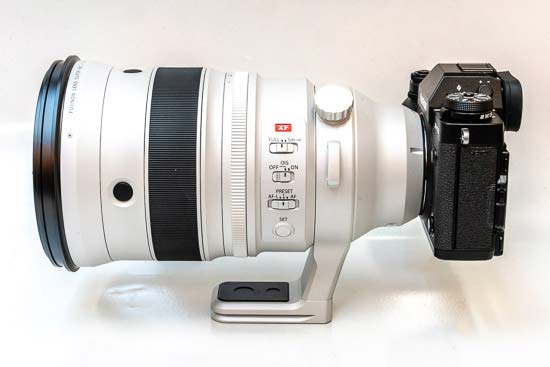 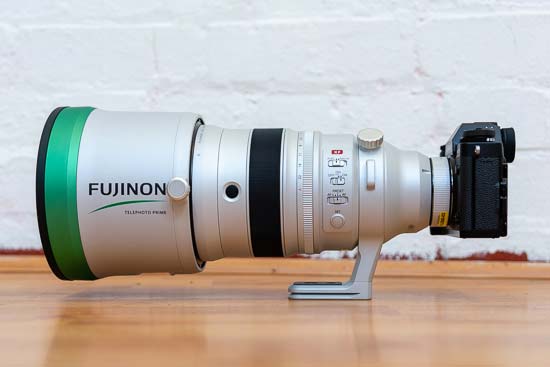 The black focus ring is generously wide and has a ridged, rubberised grip band. It's buttery smooth in action without being loose. Note that the focus ring doesn't have any “hard stops” at either end of the focus range.

The Fujifilm XF 200mm F2 R LM OIS WR lens has a traditional aperture ring on the lens barrel, which allows you to set the aperture in 1/3 steps, with the full aperture values clearly marked. The aperture ring is nicely damped and makes a distinctive click as you change the setting. 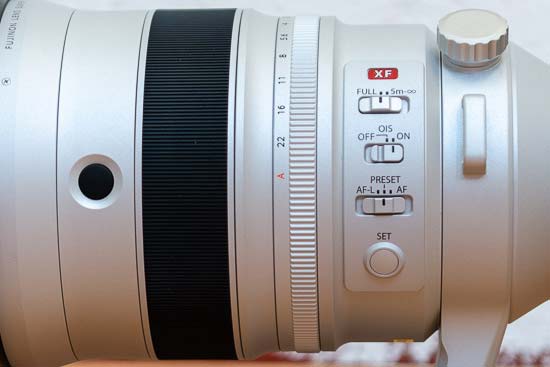 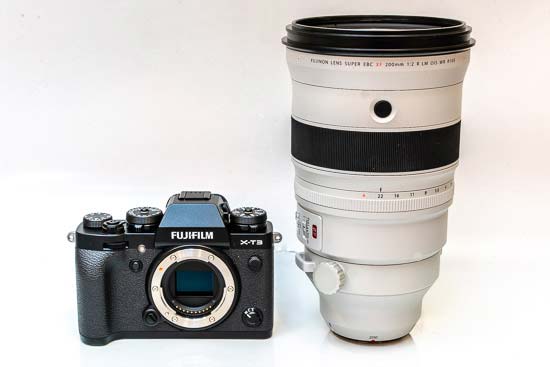 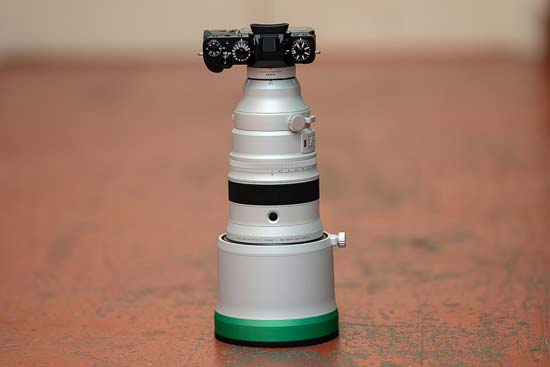 The Fujifilm XF 200mm F2 R LM OIS WR has a built-in OIS (Optical Image Stabiliser) equivalent to 5 stops, which can be handily turned on and off via the dedicated OIS switch on the lens barrel. It works wonderfully well in practice, enabling you to hand-held what is a very large lens and still get a steady view through the camera's EVF.

The focus limiter switch on the side of the lens barrel enables you to set the focusing range to either the full range of 1.8m to infinity, or from 5m to infinity. 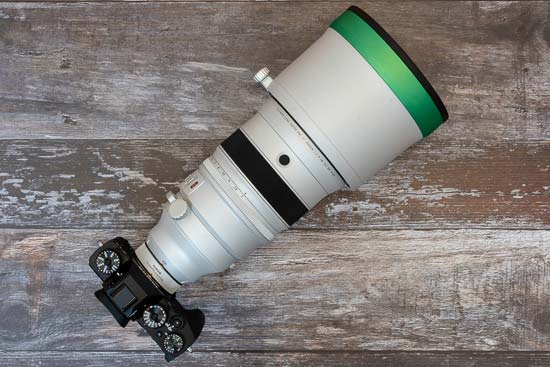 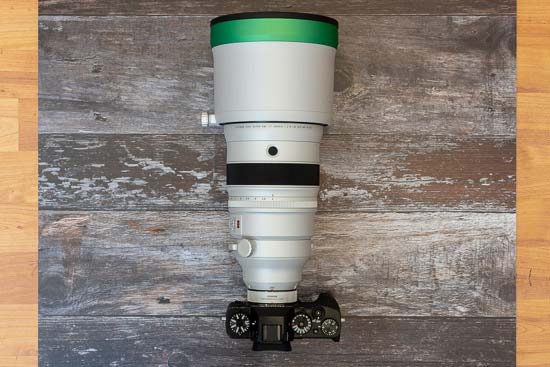 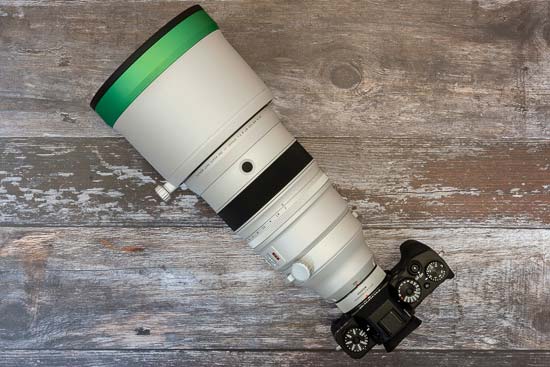 The Fujifilm XF 200mm F2 R LM OIS WR lens has an internal focusing (IF) system with a very quiet twin linear AF motor. In practice, we found the auto-focus to be fast, almost silent and with very little hunting even in low-light. Thanks to the IF mechanism the front of the lens does not rotate on focus, which is very good news for anyone looking to use the lens in conjunction with a filter.

The Fujifilm XF 200mm F2 R LM OIS WR lens incorporates a new Focus Preset feature that allows you to quickly alter the focus to a preset position, which is ideal for when you can either predict the position of your subject or you want to quickly revert to a saved point of focus. 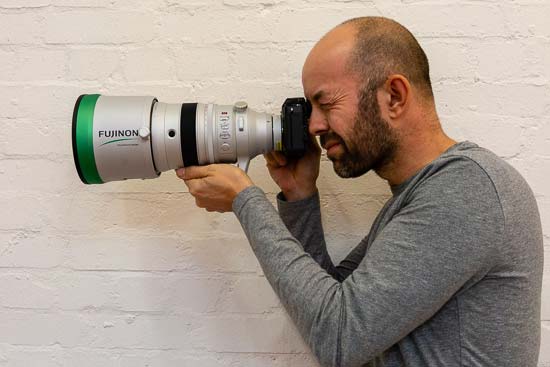 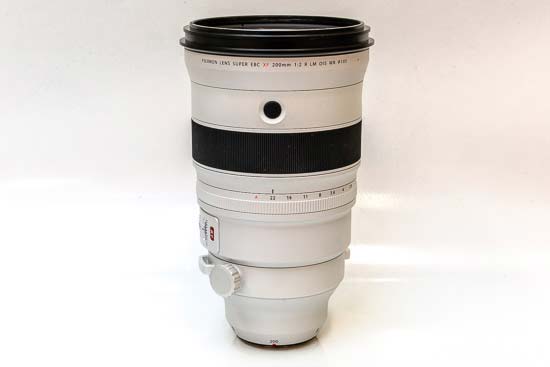 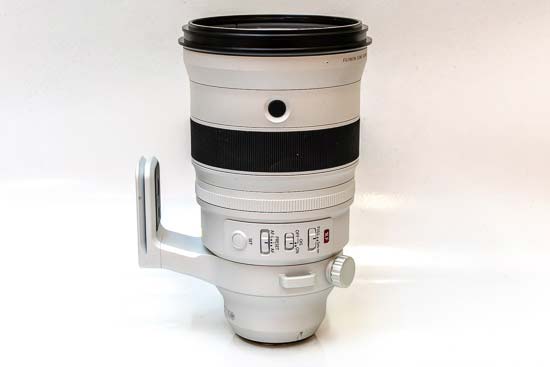 There are four Focus Control Buttons located near the end of the lens barrel which are used in conjunction with the AF-L/Preset/AF switch. They can be used to lock focus at the current position, restore the focus preset position, and perform the same function as the camera's AF-On button.

A non-removable metal tripod mount is fitted to the Fujifilm XF 200mm F2 R LM OIS WR, which is attached to the lens via a circular ring that can be rotated from landscape to portrait orientation using a single thumbscrew on the side of the barrel. There is an Arca-Swiss compatible dovetail groove and both 1/4-inch and 3/8-inch tripod attachments on the bottom to allow for direct mounting of a tripod or lens strap system. 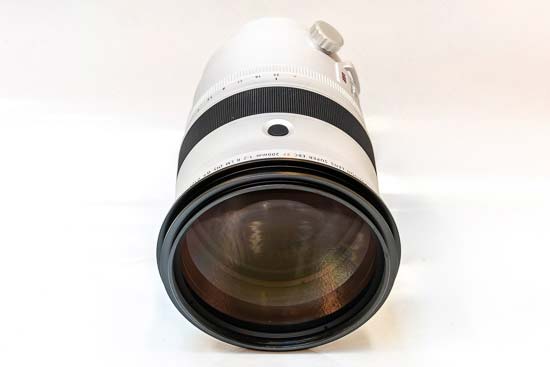 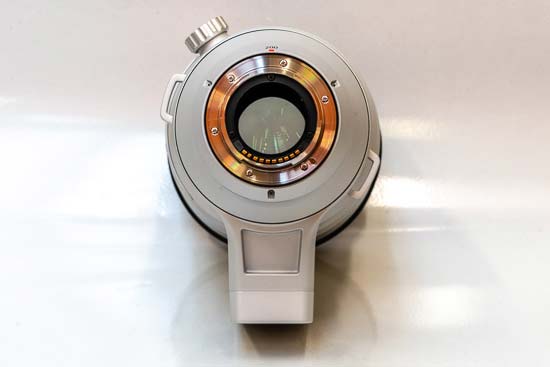 In terms of accessories, the lens ships with a very large magnesium alloy round lens hood, shoulder strap and a good quality padded case. Usefully the lens hood has a small sliding port cover on the bottom which makes it easier to adjust a circular polariser. 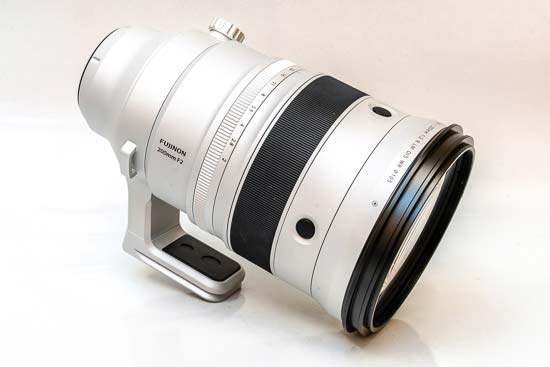 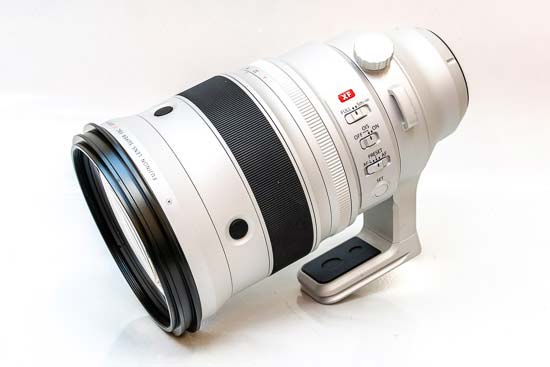 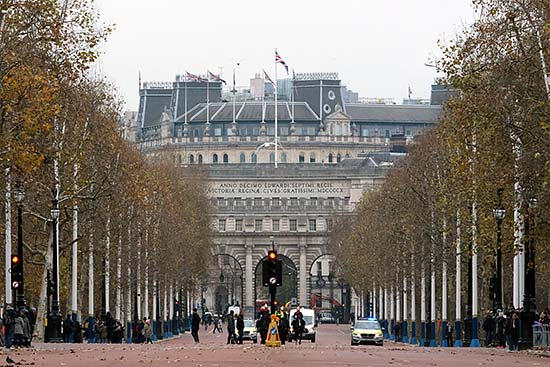 The Fujifilm XF 200mm F2 R LM OIS WR exhibits only slight vignetting at f/2 and virtually no distortion, as you can see in the photo below. 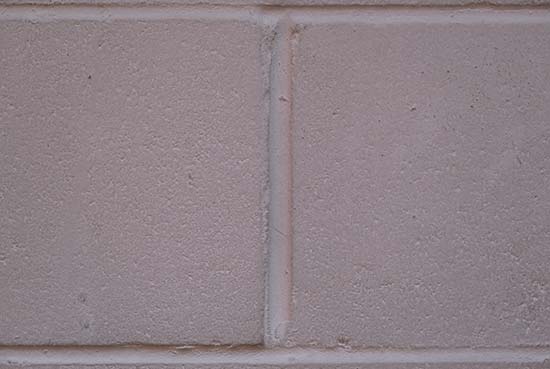 Chromatic aberrations, typically seen as purple or blue fringes along contrasty edges, are not a problem with the Fujifilm XF 200mm F2 R LM OIS WR lens, so much so that we couldn't find any examples in our test shots.

The Fujifilm XF 200mm F2 R LM OIS WR is not a macro lens. The close-focus point is at 1.8m from the sensor plane and the maximum magnification is 0.12x. The following example illustrates how close you can get to the subject, in this case a CompactFlash card. 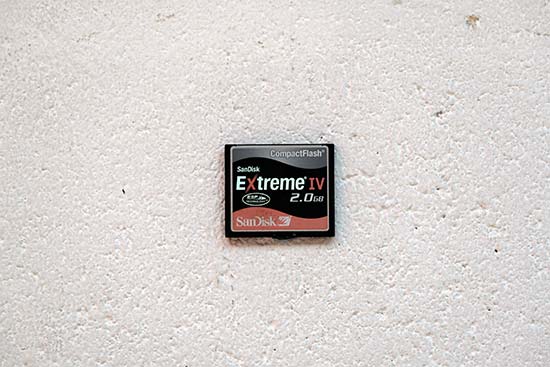 Bokeh is a word used for the out-of-focus areas of a photograph, and is usually described in qualitative terms, such as smooth / creamy / harsh etc. Fujifilm have paid attention to this aspect of lens use, employing a 9-segment diaphragm with rounded blades for pleasing bokeh. In our view, their efforts have been very successful - see the examples below.