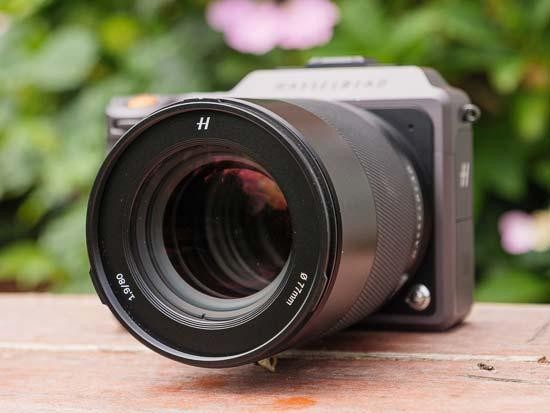 Once again we have an attractive camera and lens pairing in the Hasselblad XCD 80mm F1.9 and X1D II. The minimalistic metal lens is solid and packs some weighty glass inside.

On paper, this is the lens to get portrait photographers in particular excited about the Hasselblad X system. An f/1.9 aperture on a digital medium format system is nothing to be sniffed at that's for sure.

There is no other native lens in this format with a faster aperture and it's possible to isolate your subjects beautifully from their blurry surroundings. And you don't need to be put off using the lens at its maximum f/1.9 aperture because it is extremely sharp from edge to edge at this setting. Yes this is one sharp lens all the way up to f/11.

When we examine bokeh, those light spots appear rounded and smooth when shooting faster than f/2.8. There is some obvious cats eye shaping in the corners and minimal LOCA, but overall bokeh looks great. Possibly not £4,430 great, but great none-the-less. Stop down past f/2.8 and bokeh shapes are clearly angular which is a shame.

Chromatic aberration is the most obvious lens phenomenon that needs to be corrected. It can be quite severe in particular scenarios when using fast apertures. It's not a deal breaker by any means because aberrations can be corrected.

A sluggish performance is where the 80mm F1.9 lens is let down. Our test sample presented a slow and loud autofocus action. And the way the X1D II is setup for focusing adds to the challenge of critically sharp focus especially when making the most of the shallow depth of field on offer. Still, in the right hands this lens will do the job handsomely.

If you can get over the £10,000 asking price for the camera and lens combination, you’ll have a pairing that can do things that others cannot. Truth is, there is no like-for-like lens.

And if the Hasselblad XCD 80mm F1.9 lens suits your context and its sluggish performance is not a deal breaker either, then you won’t be disappointed.