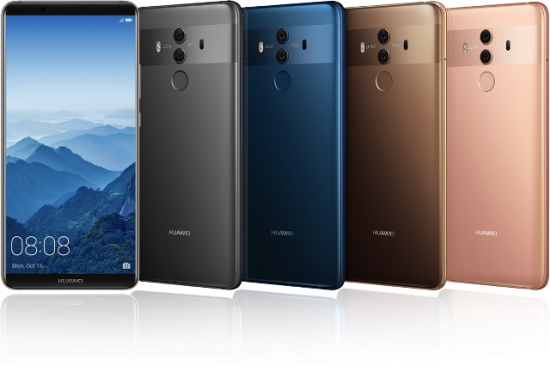 The Huawei Mate 10 Pro was announced at the same time as the Huawei Mate 10. Both of the devices feature dual sensor cameras co-engineered with Leica, but the Pro has a very slightly larger screen (among other differences).

For the purposes of this review, we will be looking at the Huawei Mate 10 Pro, but you should find that the camera performance is roughly the same in the standard Huawei Mate 10 phone.

The Mate 10 Pro has a 6-inch, 18x9 ratio screen, which is housed in the body of a 5.5-inch device. The cameras are dual sensor, with one being a 20 megapixel monochrome sensor, and the other being a 12 megapixel sensor which are designed to work together for better detail.

Other interesting features include IP67 water and dust resistance, optical image stabilisation, a wide aperture of f/1.6, and a Huawei hybrid zoom.

The phone also has an on-board artificial intelligence chip, which in terms of the camera means it can do things like intelligently recognise the subject you’re photographing, such as dogs, flowers and food, and helps with things such as creating a shallow depth of field effect and digital zoom.

Despite the fact that the Huawei Mate 10 Pro has a very large screen, it goes right to the edges of the body of the phone, making it fit better in your hand than some other large screen phones (such as the iPhone 8 Plus). As a result, it’s possible to use it comfortably in one hand when doing normal “phone” type things, such as checking your email or replying to text messages.

A fingerprint sensor on the back of the phone can be used to unlock the phone. Once you’ve registered your fingerprint, simply touching it unlocks the phone pretty much instantly. The sensor is found just below the two camera lenses, so it makes sense to be careful that you don’t accidentally touch the lenses when unlocking the phone.

The back of the Huawei Mate 10 Pro is curved, and has a very shiny surface. It’s very susceptible to fingerprints, especially considering that you’re using your fingerprint to unlock the phone. It’s worth attaching a case to the phone, both in order to protect it from drops and knocks, and to prevent it from getting covered in fingerprints.

Once open, the app offers a wealth of different options. By default, it will be shooting in fully automated mode, but if you drag up from the bottom of the screen (if holding it in portrait mode), you can activate the “Pro” mode. This gives you the opportunity to change key parameters, such as metering, ISO, shutter speed, white balance, exposure compensation and focusing method. There’s no way to change the aperture. To make a change to any setting, tap on the display at the bottom, then use the sliders to drag to the setting you want.

By swiping left on the main screen of the camera, you can access the different shooting modes available. The standard mode is the “Photo” mode, but you can also choose Monochrome, Video, HDR, 3D panorama, standard Panorama, Night Shot, Light Painting, Time-lapse, Slow-mo, Filter, Watermark and Document Scan. If you tap the “More” icon, you can add extra apps, such as “Good food”.

If you swipe right from the main screen, then you’ll be able to access the Settings menu. This gives you options to change a variety of settings, including resolution, switching on Raw format (something which is only available when shooting in Pro mode), adding GPS tags and watermarks and so on. You can also choose to switch on the Timer, and add options such as using the volume button on the side of the camera as a shutter release.

Along the top of the camera app (or left, if you’re holding the phone in landscape orientation), there’s a few additional options. Wide aperture mode is something which works with the phone’s on-board AI chip to create a shallow depth of field effect. You can choose between an aperture of f/0.95 up to f/16, and the phone will simulate that effect as if you were using a “real” camera. Tap on the subject to make it the focus point. As the effect is just that - an effect - the focus point, and the aperture selected, can be altered after you’ve taken the shot in playback.

Also at the top of the camera app, you’ll find the Portrait mode - which basically applies a “beauty” filter to enhance portraits, moving picture mode (in essence a short video clip alongside a still image which can be played back), colour mode, plus there’s the ability to switch to using the front camera.

In order to actually take a picture - there are a couple of different options. As already mentioned, you can use the physical button on the side of the phone to release the shutter. Alternatively, you can push a virtual shutter button displayed in the camera app itself, and finally, you can also use the fingerprint sensor by holding down your finger on the sensor for a couple of seconds.

You can also record video with the Huawei Mate 10 Pro. First, you need to switch into video mode by tapping the video icon at the bottom of the screen. If you swipe right while in video mode you’ll see that you can choose different resolutions, including 4K and Full HD.

The phone’s on-board AI chip is capable of recognising different subjects when you point the camera at something. You’ll know if it’s recognised something if you see a small icon appear in the bottom left hand corner of the screen, for example if you point the camera at a dog, it’ll show a small icon of a dog. It’s clever stuff that’s designed to apply the best settings for each subject.

Another use of on-board AI chip is for the digital zoom. You can zoom into the scene by using a pinch to zoom motion on the main camera screen.  It’s worth noting that you can’t use the digital zoom if you choose to shoot in the highest resolution of 20 megapixels - instead you need to shoot in 12 megapixels or fewer.

Battery life is often problematic with the modern smartphone, but Huawei has made much of its long-lasting and fast-charging battery. Inside the Mate 10 Pro is a 4,000mAH battery which boasts very long battery life which should more than see you through the average day, even with relatively heavy usage of the camera. Furthermore, it’s also compatible with “Super Charge” if you charge it using the supplied charger in the box - this sees the device charged up to 58% from dead in around half an hour and is great when you need a quick power boost.