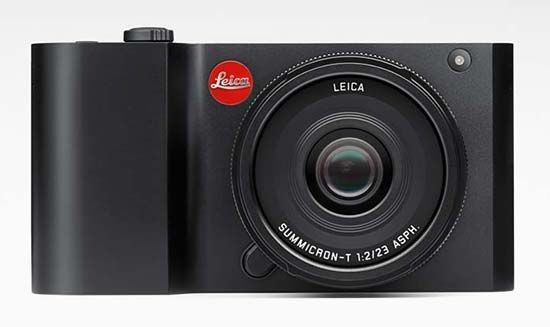 Two years in development, the new Leica T is only Leica's fourth ever camera system, following on from the M, R and T. It's a rather radical departure from the usual Leica blueprint, designed to appeal to a much younger audience who might never have considered the Leica brand before, with a sparse control layout that relies heavily on the massive 3.7-inch touchscreen display. At the same time, though, Leica haven't forgotten their roots, as the Leica T employs a solid aluminum alloy unibody design that makes it one of the most well-constructed cameras that we've ever tested, along with two high-quality lenses on launch. Priced at £1250 / $1750 body only, it's both the cheapest Leia interchangeable lens camera currently available, and one of the most expensive mirrorless cameras on the market.

The Leica T is a gorgeously designed camera literally hewn out of a solid lump of aluminum, calling to mind various Apple products that have used the same unibody process. Indeed, Leica are so proud of the T's construction that they've released a video called "The Most Boring Ad Ever Made?", which features 45 minutes of footage of the Leica T being meticulously hand-polished. Ignoring the marketing spiel, it's instantly clear upon handling the Leica T for the first time that this is as good as it gets in terms of a camera's build-quality. As you'd expect. there's literally no flex or movement in the T's body, and with only a handful of external controls, no weak-points in the overall design either. Even the large plastic flap that covers the memory card slot and USB port is substantially made.

The (in)famous red Leica badge and logo are positioned top left of the new Leica T lens mount. This brand new system features two lenses at launch, the usual kit zoom and a fast 23mm f/2 prime. In addition, the Leica M-Adapter T allows Leica M lenses to be mounted on a Leica T body, fully supporting Leica T functions such as exposure metering, aperture priority mode and manual setting capability. We'd really have liked to see a few more native-T lenses announced too, especially as Leica haven't given any indication yet as to which lenses will be launched next. We were sent the Leica Vario Elmar-T 18-56mm f/3.5-5.6 ASP for review, a nicely constructed standard zoom which balances well on the T body. At 56mm the lens protrudes another 2cms from the front of the housing, and we were disappointed by the maximum apertures - f/3.5 at the wide end and f/5.6 at telephoto are certainly nothing to write home about.

Given its slim dimensions (134.6 x 68.6 x 33.0 mm), the Leica T has quite a large hand-grip which, although not coated in any kind of rubberised material, makes it easy to hold the camera with three fingers. In addition the solidity and weight of the T's build - a heavier than average for a compact 384g with battery - means that it didn't feel like the Leica T would suddenly slip from our grasp at any point. There's no dedicated thumb grip on the rear, with our right thumb quickly smearing the large touchscreen in prints. A large lens release button and porthole for the AF assist/self timer lamp completes the front of the Leica T.

The T's sparse top-plate features a hotshoe offering full compatibility with the Leica SF 24D and SF 58 system flash units, flanked by holes for the stereo sound recording, a very neat pop-up flash that is activated by turning the On/Off button to its third Flash position. The on/off switch ergonomically encircles the slightly raised shutter release button, with a one-touch movie record button offering 1080p recording at 30fps in the MP4 format. Completing the top panel are dual aperture and shutter speed command dials, reflecting the fact that the Leica T is a intended to be a serious photographic tool. While they work well in Aperture or Shutter-priority mode, though, their side-by-side positioning makes them trickier to use in the Manual Shooting mode, as you have to use your right thumb to command both dials one after the other, rather than simultaneously.

Flick the switch to On and the Leica T readies itself for action in about 3 seconds. Squeeze the shutter release button in single shot mode to take a maximum resolution 'Super Fine' JPEG and the camera takes around 2 seconds to write the file to memory, during which you can take another picture at the same time. Take a top quality JPEG and Leica's 'DNG' file version of Raw and the camera isn't any noticeably slower, plus the advantage of the DNG format is that it can be opened directly by Photoshop without specialist conversion software required. The Leica T has a pretty decent continuous shooting mode that can take 5fps for up to 12 Super-fine JPEGs. The contrast-based auto-focus system isn't particularly quick using the kit zoom lens, though, and it occasionally hunts to find a target especially at the longer end of the range in low-light, making the Leica T better-suited to a slower, more considered approach.

The back of the Leica T is dominated by the massive 3.7-inch touchscreen display. With no other controls at all on the rear of the camera, if you don't like touchscreen interfaces, then the Leica T isn't really the camera for you. It's clear that Leica have put a lot of time and effort into this aspect of the T, as it's quite unlike any other camera interface that we've ever used.

The frame doesn't take up the whole of the LCD display - on the right-hand side are three icons for choosing the shooting mode, camera settings and display respectively. Starting from the top, the Leica T offers the usual P/A/S/M modes and 9 different Scene modes, including fully Auto, so despite being targeted at a younger audience, the T isn't really a point and shoot camera (although you can certainly use it that way). Selecting either Aperture-priority or Shutter-priority mode allows you to control the aperture/shutter with the right command dial and the ISO speed with the left command dial, with the Manual shooting mode employing both dials (with ISO being relegated to the Settings menu). Tapping the ISO icon when shooting in the Program, Aperture-priority or Shutter-priority modes displays 6 further icons - ISO, Exposure Compensation, White Balance, Focus Mode, Self Timer and Flash Mode. Sadly you can't access this sub-menu in the Manual shooting mode.

The Camera icon underneath accesses a customisable menu of icons, which can be configured to include your favourite settings. If a particular icon has a number of small dots above it, you simply tap it to cycle through the available options - very neat. If it doesn't, then tapping it opens a further screen which lets you configure that setting. This system also applies to the Settings screen, which contains all of the camera settings and is accessed by tapping the Tool icon in the top-right hand corner of the Camera screen. You have to drag across the screen to scroll through a continuous list in the Settings screen, which, with 42 options on offer, gets pretty tedious pretty quickly.

The final Info icon allows you to toggle between the four different display modes. A press of this in capture mode removes icons for the shooting mode in play, number of shots remaining, battery life, focus and metering mode from the screen to provide a clear view of the subject, whilst a further press brings up a nine zone compositional grid for which to practice our Rule of Thirds, and then a useful BW or RGB histogram.

Amongst the 5 different autofocus modes, you can choose Touch AF, which as it's names suggests allows you to focus on your subject by simply tapping on the LCD screen, with about 80% of the screen available to use. Sadly you can't also fire the shutter using the touchscreen, which would really have appealed to the mobile generation. To playback an image, you simply drag down from the top of the screen to view the last recorded one, and then left and right to go through them.

The Leica T features built-in IEEE 802.11 b/g/n Wi-Fi connectivity for wirelessly connecting to other devices such as a smartphone, tablet or computer. You can easily transfer your images and also control the T remotely via the free Leica T mobile iOS app, which, amongst other functions, allows remote setting of the shutter speed and aperture. The app also allows you to send your images to social networks or email them. Sadly an Android version of the Leica T isn't available yet, so we were unable to test out this feature.

Whilst the left hand flank of the T is devoid of features save for a protruding metal lug for attaching the strap and the microphone, the right flank features a second lug and a flip open plastic door protecting two ports: one a five pin mini USB socket and the second for the SD/SDHC/SDXC memory card slot. Commendably the Leica T also offers a massive 16Gb of internal memory, so some users may never have to use an SD card. The base of the camera meanwhile features a centrally located tripod screw thread, with a large catch protected compartment housing both the supplied BP-DC13 lithium-ion battery. Cleverly, opening the battery compartment is a two-stage process designed to prevent the battery from inadvertently falling out - you have to move the switch through 90 degrees, which partially releases the battery, then press down slightly on the battery door cover to fully release it. The battery is good for around 400 shots according to claimed CIPA standards from a full charge.