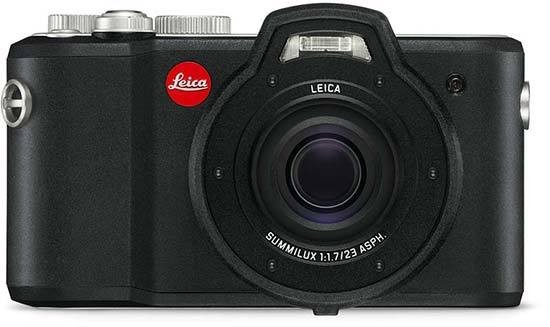 Leica introduced the X-U at the beginning of 2016. It’s basically a Leica X which has been redesigned as a “tough” camera.

That means that it is waterproof (down to 15 metres and for up to 60 minutes), shockproof (from heights of up to 1.22m), dustproof and shatterproof.

Unlike most “rugged” or “adventure” cameras, the X-U has otherwise professional level specifications. For example, it has a large APS-C sized CMOS sensor, and a 23mm f/1.7 ASPH. lens - that’s equivalent to 35mm in 35mm format.

Other specifications include the ability to record full HD video, full manual control, raw format recording (in the DNG format), and a three-inch TFT LCD monitor with 920,000 pixels.

While most Leicas are a thing of beauty, the X-U has a much more utilitarian look and feel, which is necessary to maintain its rugged credentials. Leica says that the camera has been designed with help from Audi.

It’s quite a large camera, but it’s important to remember that inside the X-U is an APS-C sized sensor, the same size sensor you’ll find in many DSLRs and CSCs.

The main body of the Leica X-U is surrounded by a rubberised textured grip which makes it feel extremely sturdy in your hands, especially when using it under water. Further helping when shooting underwater is the buttons themselves, which are large and simple to allow you to quickly find the one you need - they would also be good if you were wearing gloves whether shooting underwater or in a cold environment.

On the top of the camera is a metal top plate which contains the shutter release button - which is raised slightly - and two dials. One of the dials changes aperture, while the other changes shutter speed. You can set both to “A” for automatic if you want the camera to enter into a nigh-on automatic mode. There is no mode dial, but you will be shooting in aperture priority if you leave the shutter dial on A but take control of the aperture. And similarly you will be shooting in shutter priority if you leave the aperture dial on A and take control of shutter speed. Each of the dials is ridged while they have a satisfying amount of push so it seems unlikely you’ll accidentally turn the dials when you don’t mean to.

Around the shutter release is a switch which will turn the Leica X-U on and in to either continuous shooting mode or single shooting mode. The shutter button itself is a little small considering how large some of the other buttons on the camera are - and of course the fact that it is arguably the most important button on the camera.

There’s a small video record button which is tucked away next to the shutter release. Its small size means it’s unlikely you’ll accidentally knock it on when you don’t want to video record, but it does also make it a little fiddly if you’re using the camera underwater.

The lens, which is large enough to appear as if it may be detachable (it isn’t), has a large focusing ring, which is also ridged. You can turn it all the way round to the right and the lens will autofocus. The lens has markings in feet and metres to help you when manually focusing, too. Again, the focusing ring is quite stiff - while that helps with smooth manual focusing, it’s quite a slow process. When you start to turn the focusing ring, a magnified view of the scene will appear in the centre of the screen to help you with precision focusing.

Interestingly, the Leica X-U’s inbuilt flash is found on the front of the lens, rather than on the camera itself. This is useful when photographing underwater as it brings the flash closer to the subject - underwater photography is usually characterised by low light.

There’s no viewfinder, but there is a cold shoe on top of the camera where you could add different accessories.

Moving to the back of the Leica X-U, the layout has been designed to be as simple as possible so as to minimise fuss when you’re shooting underwater or in other “adventurous” situations. The screen has been reinforced so it should withstand some pretty serious abuse.

You will need to use two hands to operate all of the buttons, which seems like a bit of an oversight for a camera which is supposed to be simple to operate, but the more commonly used buttons are grouped on the right hand side, as are the two dials on the top plate.

There’s a four way navigational pad, with each button having a specific function. You can access a timer with the left directional key, exposure bracketing with the up key, flash modes with the right key, and switch on “underwater mode” with the down key - this is basically switching the white balance mode to be specifically for underwater. You’ll know that you’re in underwater mode as a goggles icon will appear on screen. In the middle of the navigational pad there’s a button marked as “info”.

To the left of the screen there’s a button marked “play”, for playing back images, a button which doubles up as a delete button when in playback, and changing the focus mode when in shooting (or bringing up focus assist when using manual focus), another for white balance, another for ISO (sensitivity) and a final one for accessing the main menu (and which you can use as a set button).

There are four different focus modes available to choose from. If you choose “Spot/Single Field” focusing you’ll be able to shift the AF point around the frame to the one you want to use. To do that you need to hold down the focus button for more than a second until the arrows appear - it’s not obvious that you need to do it, but it is mentioned in the detailed manual which you can download from the Leica website.

When you’re navigating through the main menu, rather than pressing the central button to select a specific menu item (as would seem logical), you need to press the right directional key to access the additional options. Although it’s not that obvious a way of working (unless you’re already used to using Leica cameras), it’s something you get used to eventually and it becomes second nature with time.

Each of the buttons is quite stiff to push, presumably because of the waterproofing housing, but that has the benefit of making it unlikely you’ll accidentally push a button you don’t want to when using the camera underwater. There’s just one “door” on the camera, which reveals the battery and memory card. You will need to push down a switch, then move the lock across to open it - it’s quite fiddly and stiff to do this, but that’s good as it makes it extremely unlikely you’ll be able to do this underwater and expose the interior of the camera to water.

Unlike the Leica Q, the rear screen of the X-U is not touch sensitive, but there’s little use for a touch sensitive screen when the camera is designed to be used underwater so that’s no surprise.

Although full manual control is available with the Leica X-U, there will be times when the camera wrestles back some control from you. For instance, when attempting to photograph a close-up image - the closest focusing distance being 20cm - even if you have the aperture set to f/1.7, the X-U will automatically change to f/2.8. This is presumably to prevent dark shading appearing in the corner of the image which is likely to result from wide apertures at close distances - but it’s a little odd that you can’t make that decision for yourself.