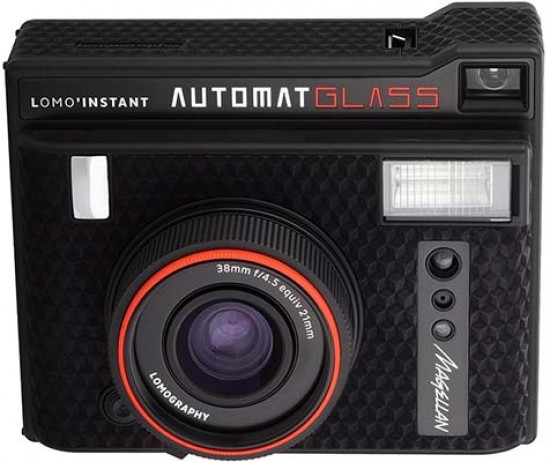 A camera like this is not for those who like to be demure with their camera choices. Although it’s not the most unusual looking Lomo camera on the market, it’s also quite far removed from most average cameras. The Lomo'Instant Automat Glass is far too large to fit in a pocket, with a square design that has been built to accommodate the Instax Mini film at the back.

For the moment, only the Magellan edition is available - but if it’s anything like other Lomo cameras, plenty of other colour ways will become available before long. This particular design is black with orange detailing. The whole camera is covered with a textured coating which creates a pleasing pattern and gives it a sense of high quality too.

In terms of operation, the Lomo'Instant Automat Glass uses the same design as the original Instant Automat. On the front of the camera is the lens, which needs to be twisted to switch the camera on. You’ll also find three different focusing options, to go from 0.3 metres at the closest point, to a mid-range of 0.6 metres to the furthest distance of 1m / infinity. Choose a different focusing option depending on what you’re trying to focus on - generally speaking the best results come from infinity focusing as there’s more margin for error. To turn off the camera, you need to hold down a button to the side of the lens and twist it back into the off position - it’s important to make sure you do turn it off because otherwise it can be very easy to accidentally fire off a shot. With ordinary cameras, that might not be such a big issue, but with this camera - every shot is film, and therefore money, wasted.

You’ll find the Automat Glass’s shutter release on the front of the camera. It takes the form of a mirrored rectangular button, which means that you can use it as a “selfie mirror” when composing self-portraits. The camera’s flash is also on the front, and there is space to insert coloured filters to change the look of your images.

As the Lomo'Instant Automat Glass is intended to be fully automated, there isn’t too much in the way of changing settings. That said, there are buttons on the back of the camera which give you a little bit of control. The small buttons are all found towards the top of the back of the camera. There’s the option to switch the flash on or off, add or take away exposure compensation, shoot multiple exposures and either shoot in fully automatic, or switch to bulb mode. If you switch to bulb mode, the camera will expose for as long as you hold the shutter release down.

In multiple exposure mode, the Lomo'Instant Automat Glass will continue to take shots until you press the MX button again - at which point the film will be released which shows the different exposures made on one frame. Of course there’s no screen included to show you any changes which have been made, instead you have to rely on LED lights which will activate to show you what has been selected. As an example, if you have multiple exposure mode activated, an orange light will be displayed.

As already mentioned, the Lomo'Instant Automat Glass uses Instax film. This is incredibly easy to use and insert into the camera. It’s simply a case of popping the cartridge in the back of the camera (behind a door which is released via a catch) and lining up the yellow line on the cartridge with the yellow line on the camera. There’s a hole in the film door which allows you to see whether film is inserted and therefore avoid opening the door and exposing the film. Each Instax cartridge contains 10 shots. You don’t need to guess how many shots you have left, as a row of LED lights on the side of the camera light up to indicate the number remaining - so, for example, if there are four shots remaining, only four of the lights will be on.

Accessing the battery is also via the back of the Lomo'Instant Automat Glass. It uses 2x CR2 (3V)  batteries, which are not anywhere near as common or easy to find as AA or AAA batteries. The good news however is that since the camera doesn’t use much power, a single set seems to last a long time - you may want to invest in a second set to make sure you’re always ready to go though.

There’s a small viewfinder in the top left hand corner of the Lomo'Instant Automat Glass. This should be used more as a rough guide as to what will appear in your photo, rather than being completely accurate. It takes a bit of time to get a good idea of exactly what is likely to be included in the frame, so it makes sense not to position anything too closely to the edge in case it gets accidentally cut off.

Over on the right hand side of the Lomo'Instant Automat Glass is a tripod thread, which could be useful for long exposure shots. Due to its position, you’ll either have to shoot in portrait format, or have a tripod which can turn to 90 degrees to shoot in landscape format. Lugs on the top and the bottom of the camera can be used to attach a strap.

When you’re ready to take a shot, you press down the shutter release button and the Instax film should pop out of the side of the camera. At first, it will appear white and takes a while to fully develop. You should quite quickly begin to see a rough outline of your subject, with the full development ready within about 20-30 minutes.

In the box with the Lomo'Instant Automat Glass Magellan edition, you also get a close-up lens attachment, which is designed to allow you to take better close-up shots. There’s a remote control lens cap, which you can use to trigger off the camera remotely. There’s also a “Splitzer”, which is designed to split your image in two in one frame. Also included are magnet stickers, glue dots, photo stands and photo clips for displaying your shots. A box of cards with tips and tricks is also in the box to help you to get to grips with how the camera works.