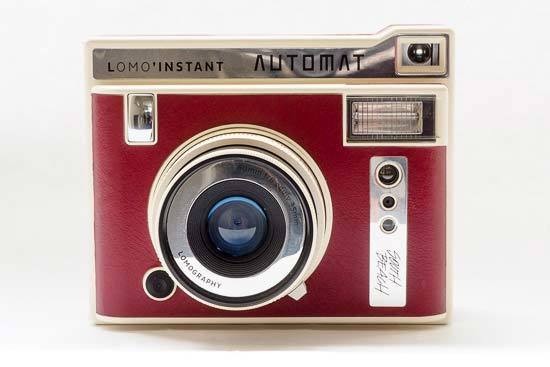 The Lomo'Instant Automat was developed by Lomography and funded by a Kickstarter campaign. It is described as the “most advanced automatic instant film camera on the market”. It takes the popular Instax format of film, and has two shooting modes, a fully automatic shutter, and you can buy it with a range of lenses to convert the one that it is attached to the model as standard, which offers the equivalent of 35mm.

Like most Lomography cameras, the Lomo'Instant Automat has a pretty unusual look. It’s far too large to fit in a trouser pocket, but as it uses the Instax Mini film, it’s smaller than some of Lomography’s other cameras in its line-up.

There are a couple of different camera ways you can buy the Lomo'Instant Automat in - we were supplied with the “South Beach” edition to us for our review, which is a burgundy and cream design. You may draw some attention when using a camera like this.

On the front of the camera, you’ll find the lens which you need to twist to switch on the camera. Once you’ve twisted it, you have three focusing options to choose from - close, mid-range and infinity - it’s a manual focusing lens, with each option marked on the lens. When you want to switch off the camera, hold down a button just to the side of the lens and twist the lens back to the “off” position.

Also on the front of the Lomo'Instant Automat is the shutter release button, which when holding your camera with your right hand just about falls under your middle finger. The button is reflective silver, so you can use it as a “selfie mirror” to help you compose self-portraits. The camera’s flash unit is housed on the front of the camera, as well as light sensors.

On the back of the Lomo'Instant Automat are the buttons you’ll need to make settings changes to the camera. Although things like aperture, metering and so on are all automatic, you have a few options to choose from here. You can switch the flash on and off, you can add or remove some exposure compensation, or you can create multiple exposures. There’s also the option to take control of shutter speed by switching to a bulb mode - by doing this, the shutter will stay open for as long as you hold the shutter release down for. For multiple exposures, if you select this option, you can take as many exposures as you want to, then press the MX button again when you’re done.

There’s no screen to indicate which settings you have chosen, instead small green lights will activate to show that you have that setting working. For example, if there’s a green light next to the flash icon, that means it’s on - if there’s no light, it’s not. Where there are two options per button (for example, positive exposure compensation and negative exposure compensation), the light will appear next to the corresponding setting - for example the + sign, or the - sign. The exception to this is the MX setting, which has an orange light instead of a great light.

To insert a film cartridge, you need to release the door on the back of the Lomo'Instant Automat. It’s very easy to use Instax film, as it’s literally a case of popping the cartridge in the back of the camera, lining up the yellow line on the cartridge with the yellow line on the camera. There’s a small window in the film door, so you can see if a film is already in the camera - if there is, you shouldn’t open the door until it has run out to avoid exposing the film.

Luckily you don’t have to guess how many shots you have left - there is a row of LED lights on the side of the camera which, when the Lomo'Instant Automat is switched on, will light up depending on the number of shots remaining. Each Instax cartridge contains ten shots, and there are ten lights - so, for example, if there two lights lit up, you know you have two shots left in the cartridge.

The battery compartment is also accessed via the back of the Lomo'Instant Automat. The camera uses 2 x CR2 (3V) batteries, which are not the most common type in the world, but you can find them in larger shops. I’ve been using the camera reasonably extensively for a while and the set of batteries I bought to use have not shown any sign of giving up yet, though. You may want to invest in more than one set of batteries at a time though to make sure you always have charge as you can’t simply “recharge” the camera when you need to use it.

A small viewfinder window is found in the top left hand corner of the Lomo'Instant Automat. You can use this to roughly frame your photo, but thanks to parallex error, it’s not completely accurate and you may find you need a bit of practice to understand exactly what is, and what isn’t, likely to end up in your shot.  On the right hand side of the camera is the tripod thread, while there are lugs on the top of the bottom of the camera which can be used for attaching a strap.

When you’re ready to take your shot, you simply press down the shutter release button firmly and the Instax film will pop out of the side of the Lomo'Instant Automat. You’ll see that at first it’s completely white - shots take a while to develop, in the first few minutes you’ll be able to see a rough outline of your subject, while it should be fully developed within about 20-30 minutes.

If you buy the Lomo'Instant Automat as part of lens package, you get a bunch of adapter lenses to expand the possibilities of the Automat. There’s a close-up lens, a fish-eye lens and a wide-angle lens. Each of these lenses screws on to the standard lens quickly and easily, and can also be removed with ease. Bear in mind that as the viewfinder doesn’t use optics, no matter which lens you attach to the camera, the view in the finder will remain the same - and therefore be no help for framing.

Also included in the box is a set of coloured flash filters, which you can simply slot into the flash housing on the front of the Lomo'Instant Automat. There’s yellow, green, blue and purple available - if you use them, your images will have a colour tint. There’s also a “splitzer”, which means that you can expose certain parts of the image, and not other parts - which can be handy for multiple exposures. There is also a lens cap which doubles up as a remote release, and also has a built in torch - which you might want to use for light painting.

A box of cards which give you hints, tips and inspiration is also included in the package, which can be useful, particularly if you’ve never used a Lomo camera before and want to work out what kind of shots you can take with it.