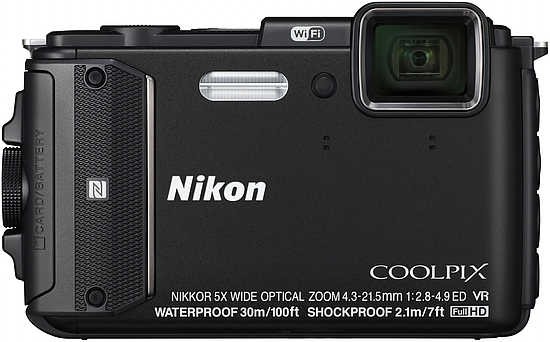 Outwardly, the new Nikon Coolpix AW130 looks a lot like its predecessors – the AW100, the AW110 and the AW120 –, featuring the same rounded-yet-boxy design, with the most obvious novelty being a small, textured hand-grip on the front plate of the camera. While this grip seems more like an add-on than an integral part of the design, it does enable you to hold the camera firmly in your hand.

The Nikon Coolpix AW130's lens is located in the top-right corner when viewed front on, shielded by a clear lens cover that is open when the camera is turned off and on. The lens is a 5x zoom of the internally stacked variety, so it does not extend upon power-up or zooming. In 35mm equivalency, it spans focal lengths ranging from 24mm to 120mm. Aperture-wise it is fairly fast (for a fixed-mount compact camera lens, that is), its brightness being f/2.8 at the wide end and f/4.9 at full telephoto. It features a lens-shift vibration reduction mechanism that enables you to take sharp hand-held shots at shutter speeds that would otherwise be critically slow for the chosen focal length. On the front of the AW130 there's also a slimline flash unit, four small holes below the lens for the camera's stereo microphones, and the shared self-timer/AF-assist/movie light lamp.

On the top plate there is a large shutter release button with a cross-hatched texture to aid location, a round, recessed power button and a sign indicating that the camera features a built-in GPS module. This records the exact latitude and longitude and stores it in the EXIF data of each image. The Nikon AW130 has a sophisticated suite of GPS options, from using it to set the camera's clock, displaying points of interest, creating a log of your routes even when you don't take any pictures, to even a built-in electronic compass. Your current position and logged routes can be displayed on the built-in offline world map. Do note that using the GPS receiver has a knock-on effect on the battery life, though.

The camera's rear plate hasn't changed much from the AW120, and the few minor modifications that have taken place are mostly cosmetic in nature. The back of the camera is still dominated by the 3”, 921,000-dot OLED display, which offers excellent viewing angles and a 5-step brightness adjustment. Curiously for an “all-weather” rugged camera, our review unit arrived with several clearly visible scratch marks on the screen; serving as a reminder that while its shockproofing might allow the shooter to carry on working even after it has been dropped from a height of 2.1m, it does not guarantee complete immunity against all kinds of mechanical damage.

The camera's rear-mounted controls include a thumb-controlled zoom rocker, a movie record button, a multi selector with centred OK button, plus separate Record/Scene, Playback, Menu and Delete buttons. A number of frequently used functions such as Flash Mode, Exposure Compensation, Macro Mode and the self-timer have been mapped unto the four-way pad for quick access. All of these buttons require a bit of force to operate, which you might find a tad unusual at first. A small flash indicator lamp in the upper right corner completes the inventory.

On the left side of the camera, there is a vertical row of three large buttons including World Map, Wi-Fi and Action Control, plus a monaural speaker. Of these, 'Action Control' may require a bit of explanation. Basically, it is a clever mode that makes the AW130 easier to use when wearing gloves or underwater. When activated, you can control certain functions of the camera by moving it from front to back or tilting it up and down. In practice this system works well once you've got the knack of it, although the number of settings that you can change is somewhat restricted.

Wi-Fi, which was first introduced to the Nikon AW series in the AW120, enables users to download the photos they captured to a smartphone or tablet without having to remove the memory card or plug cables into a possibly still wet camera. It also allows you to control the camera remotely using the Wireless Mobile Utility app. We tried the iOS version, which worked well but provided only a limited degree of control over the picture-taking process.

NFC (Near-Field Communication) is a completely new feature on the Nikon Coolpix AW130. This functionality enables anyone with an NFC compliant smart device to establish a wireless connection and start up the Wireless Mobile Utility simply by touching the NFC antenna on the device to the N-Mark on the camera.

On the right of the camera you will find a single, waterproofed door that covers the battery, memory card, HDMI and USB sockets. An ultra-secure locking mechanism that requires you to push a button and rotate a dial to open the compartment door ensures that it doesn't get accidentally opened to the elements.

Like its predecessors, the Nikon AW130 is a highly automated compact camera that relies on a variety of auto and scene modes to capture photos. The lack of a diaphragm in the lens means that the aperture and shutter priority modes preferred by many enthusiast photographers were not possible to implement in this model (this is typical of small-sensor compacts). The available shooting modes are Auto, Scene Auto Selector, Scene, Smart portrait, Special Effects and Short movie show. The camera's suite of scene modes includes portrait, landscape, sports, night portrait, party/indoor, beach, snow, sunset, dusk/dawn, night landscape, close-up, food, fireworks show, backlighting, pet portrait, and, of course, underwater photography. For time-lapse movie recording and panoramic photography, you will also need to delve into the Scene mode menu.

The Nikon AW130 can capture Full HD/25p/30p movies with stereo sound, and the optical zoom can be used while filming. It is also possible to capture stills while recording a movie, although resolution will be limited to 1920×1080 pixels or less. Additionally, you can extract and save frames from movies already recorded (with the same restrictions on resolution).

In use, the Coolpix AW130 proved to be a pleasantly responsive shooter. Start-up takes just over 1 second, and focusing is also commendably fast, at least in good light, especially at the 24mm (eq.) end of the zoom range. In Continuous H mode, the camera can shoot full-resolution stills at a very respectable rate of about 7fps, but only for five consecutive frames (i.e. less than one second). Continuous L mode is considerably slower at approximately 2.2fps, but you can capture about ten full-res shots and track your subject while shooting. Faster burst modes – offering shooting speeds up to 120fps – are available, but these impose severe restrictions on image resolution.

The AW130's main claim to fame is its robust waterproofing, which allows you to take the camera to depths of up to 30 metres. While we weren't in a position to test this, we did take the camera to a local swimming pool, where it performed admirably, although we did find the display somewhat difficult to see underwater.

The Nikon Coolpix AW130 runs on a dedicated EN-EL12 Lithium-ion battery, and records images as well as videos on SD / SDHC / SDXC cards. As already mentioned, the battery and card share a common compartment with the HDMI and USB ports, whose lockable, sealed door is found on the right of the camera (looking from the rear). The quoted number of images that can be captured on a single charge is 370, but this will be greatly influenced by GPS and Wi-Fi usage. The battery needs to be charged in-camera, using the supplied USB cable and EH-71P charging AC adapter. Charging takes just over 4 hours when connected to a computer via USB, and 2 hours 20 minutes using the  power adapter. The battery is also compatible with the separately sold MH-65 charger.