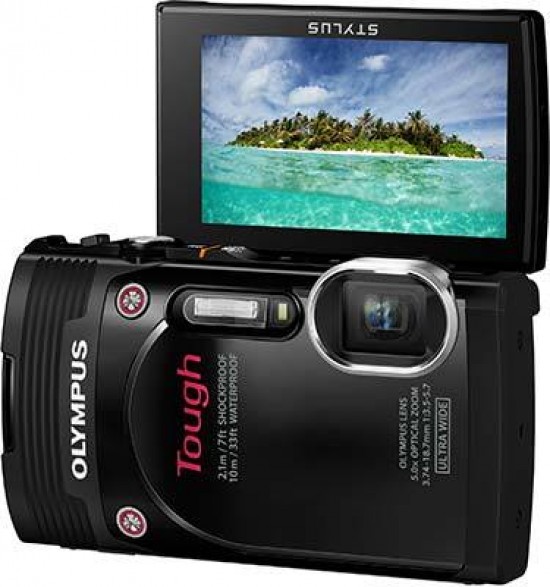 From the Tough stable of Olympus Stylus digital compact cameras, comes the TG-850. Featuring an interesting array of features such as full proofing against water, being dropped and cold snaps, a tilting LCD screen, a 21mm wide-angle lens and interval shooting. Available in white or black, the Olympus TG-850 costs around £230 /$250.

Opening the box of the Olympus Tough TG-850 reveals a CD that holds the full instruction manual as well as a basic editing suite called Olympus Viewer 3. There's also a Basic Manual that looks quite thick, but is in 29 different languages.  Lift up the flap that keeps the disc and guide separate from the main body of the box and you'll find the camera sitting below. It's joined by a lithium ion battery, wrist strap, charging unit, mains cable and USB lead. The latter acts as the cable to plug into the camera in order to charge it with the other end going into the charging unit.

The Olympus Tough series of cameras all feature the design that was made popular by early Minolta digital cameras whereby the lens had a mirror situated behind it. This reflected the image at an angle towards the location of the sensor which could be on the side wall or the bottom of the camera. We wanted to know if the mirror system was still in use or if a revolutionary breakthrough had happened and was now being used. We managed to get in touch with Olympus Japan who confirmed that the same technology is employed. They said: “We are using bending lens unit while normal camera which have a lens on center is using straight unit. Bending unit means that the light will bend inside this lens unit by using the mirror parts. We are using this from past models, so nothing is new from bend/straight point of view.” What the lens also has is a lens shifting image stabiliser, which is something that hasn't been seen on a camera like this. This is coupled with a 21mm wide-angle lens. The TG-850 is also the first Tough style camera to sport a lens this wide.

The rest of the camera is an interesting design and has some great features on it. Because of the way the front of the camera is designed, it appears to be longer than it should be – as though an extra piece has been tacked on to the side. It's down to the gloss paint (more noticeable on the white version that we tested) as it contrasts more with the rest of the body. Even though Olympus have a habit of making their waterproof cameras look like normal everyday cameras, there's still a couple of rivets on the front to make sure people know that it's waterproof. For some reason this seems to be a running theme with all waterproof cameras, even though it seemingly bears no advantage to the camera other than to set it apart from cameras that aren't waterproof.

On the back of the camera is one of the most interesting features on the TG-850. It sports a tilting screen that can flip over 180º so that it's facing the same way as the lens. This is great for self portraits but also helps with wanting to photograph in unusual angles. Low viewpoints can be perfectly taken, such as underwater while you remain safe and dry on land, but to shoot over something (high up), you'd have to turn the camera upside down and flip the image while in processing. This is because the screen doesn't flip round sideways and it's not a difficult job for what you presumably save in the cost of a waterproof camera with a fully articulating screen.

Olympus have gone all out on making the TG-850 THE camera to choose when wanting the best quality pictures whether you're underwater or not. As well as the aforementioned lens system with image stabilisers and wide-angle focal start point, they've also fitted the TG-850 with a 16 megapixel BSI CMOS sensor. Olympus call it iHS, which stands for Intelligence, High Sensitivity and High Speed. You can't deny that iHS sounds better than iHSHS. For those of you unfamiliar with BSI technology, it moves the circuits usually found around each pixel onto the rear of the sensor. This opens up the pixel and allows more light in it, so it performs better in the dark. To look at the sensor, it would look like a traditional sensor has been fitted backwards, so when the light hits it, it's being illuminated on the back. BSI stands for Back-Side Illuminated. Once the sensor has captured the image, it goes through the processor and Olympus have used the TruePic VII. Their newest version of the dedicated imaging processor. We're very interested to see the photographs that this camera can yield.

We need to at least touch on the proofing capability of the TG-850. After all, it is a Tough camera. The camera is shock-proof to a height of 2.1m or 7ft in imperial measurements. That's on the higher side of standard and means that if you have a clumsy 6ft tall person living with you, the camera is still pretty safe. It can also withstand pressure of 100kg. That's likely more linked to the depth that the camera go underwater to, which is 10m. This depth is more or less a standard distance for these types of cameras and after the obvious increase in shock-proofing, we would have really liked to see an increase in depth resistance.

The Olympus Tough TG-850 has two main menu systems. The Function menu is situated to the right of the screen. Pressing the OK button or any of the directional buttons surrounding it will open up this menu. If you press one of the buttons that have a designation (such as down, for Flash options) then the Function menu will open at that setting. As you scroll through various options on the command dial, the amount of options on the screen will change.

The Main menu is located toward the bottom of the camera. It opens up a more comprehensive list of functions that will adjust the camera's more core features. The menu is split into four sections with two of them sporting multiple pages. In the first section titled Camera menu, you can make changes to how the camera takes pictures, such as focus and metering, compression and shadow adjustment. Comparably, the Video menu only has four options.  The Playback menu is also here but uses only one page, while the Set up menu has two pages of options for you to choose from.

Start up from cold is extremely fast with the camera powering on, focusing and taking a picture in around 1.2sec. The average has dropped recently from 2sec to around 1.5-1.8sec, so this is a brilliant improvement.

The TG-850 has two sequential modes and two burst modes. The sequential modes work slower and more consistently than the burst modes which rattle pictures off in a short time before stopping when the buffer gets full. They're divided by a 1 and 2 but they do perform differently as well.  Sequential 1 has an average frames per second (fps) rate of around 2.6. We managed to take 26 images in a ten second period and the camera never slowed or faltered. It also downloaded the images by 19 seconds. Sequential 2 is seemingly more of a burst mode. The cameras took six images in 1 second before downloading. It recovered and took another five pictures five seconds later, then a further four pictures at just under 9 seconds.

As we mentioned there are two high speed burst modes and this is arguably what sets Sequential 2 apart. In Hi1, the camera took 20fps to a maximum of 60 frames in a three second period. Don't be fooled, the camera drops the resolution to 2.7 megapixels in order to speed things up, but it's still a good feature to use if you have some fast moving subjects. The pictures are the ideal size for loading onto a social media site, too. Hi2 goes on step beyond and takes a total of 60 frames in one second. The resolution is still reduced and in fact is the same as Hi1. It's your choice which one you want to use.

Plaayback on the TG-850 can be switched on by pressing the playback button on the back of the camera. This can be performed whether the camera is switched on or not. Pressing the Info button will scroll through various viewing options such as no information on screen, some information and indepth. The latter shows critical information such as the shooting mode, ISO setting, resolution shot at, white-balance and also a Histogram.