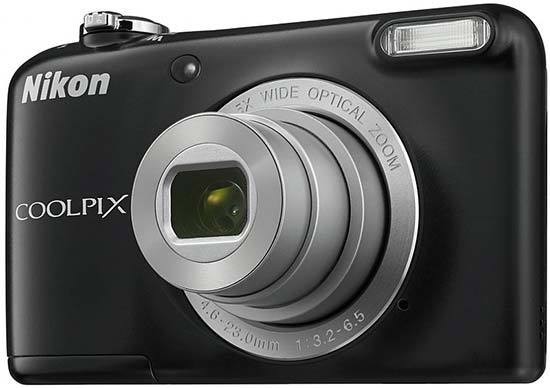 Photographers often overlook the usefulness of a small, easy to use compact camera and instead prioritise the larger DSLRs. However, a pocket sized camera can be a very useful tool for many aspects of photography. Luckily, Nikon know this and have released the Coolpix L31, a 16 megapixel point and shooter featuring a 5x optical zoom, electronic vibration reduction and SDXC storage compatibility. Priced at around £79, the Nikon Coolpix L31 is available in black, silver, red and purple.

We're convinced that every time we receive a new camera, the box has got somewhat smaller than the previous model. Most of the time, we're wrong, but there's no denying it with the Nikon Coolpix L31. In the past, the box would have the camera, charger, batteries, strap, warranty cards, leaflets, user manual, CD software and even a memory card at one stage.

Now, the modern world is catching up and people simply don't need a lot of that stuff. So in the box of the Coolpix L31, the user manual has been reduced to a quick start guide and the full manual can be downloaded from the Nikon website should you require it. The warranty has been attached to the quick start guide to reduce the amount of pieces of paper you get. There are still batteries and a strap (memory cards stopped being included years ago) and a USB cable. Arguably, the reason a smaller box can be used is due to the lack of a CD which traditionally provided a basic editing suite for your computer. More recently the full manual was also added to the disc which is now on the website for download. Not having a large disc in the box allows it to be smaller and saves paper.

The main design of the Nikon Coolpix L31 has stood the test of time for a good few years now. It has a smooth, curved look to it that bulges out at the left hand side. This bulge serves a double purpose of providing a wider grip when taking pictures which is useful for people who maybe can't curl their fingers around a thin camera for whatever reason. It's also the part of the camera where the two AA batteries are inserted into the camera.

The lens sits on the front of the Nikon Coolpix L31 slightly off-centre to accommodate the curve of the body. The modest 5x optical zoom has 6 elements in 5 groups and equates to a 26-130mm zoom lens in 35mm terms. That should be enough for general picture taking such as holidays and days out when a camera such as this will be used the most. The big difference between the L31 and its predecessor the L29 (the L30 being a higher resolution version) is the addition of Electronic VR (Vibration Reduction) when filming video. This feature wasn't available on either of the previous models and will help keep scenes steady. However, it's worth noting that at 720p HD quality, most electronic versions of image stabilisation will crop into the frame and just use the middle so you don't see the edges wobbling about. Doing this means less pixels are actually seen on the screen which could mean that it's no longer classed as HD. Bear in mind that the drop in resolution will be negligible and shouldn't detract from your viewing pleasure.

The buttons on the back of the camera have been made as large as they can without interfering with the other buttons and becoming too cramped. There's still space to rest your thumb when not using the functions. To access basic shooting functions, you simply press the button with the camera icon on it. This brings up a small display on the right of the screen. It allows you to choose the shooting mode you'd like the camera to be in and you can choose from Scenes, Portrait, Special Effects, Smart Portrait and Auto. The latter is the most adaptable to various conditions while the others are set up for particular situations.

However, delve into the Main menu and there's still not a great deal to do. There are only three tabs which line the left side of the screen. The tab you're in will highlight in white, while the selection you're currently on will have a yellow band across it. The three tabs are Camera, Video and Set up menus. The Camera section only has three options in it, while the Video section only has two. Set up has more available in it because it deals with the core features of the camera, such as the date & time, languages, sound options and formatting the card.

The Nikon Coolpix L31 is built to the price point it's set to. It's a happy snapper camera and is built as such. At £79, it's understandable that most of the body is made of plastic. The card and the batteries sit alongside each other in the wider end of the camera. They're accessed via a slide lock style door on the bottom plate. The tripod bush is positioned to the opposite side, which could cause leaning when shooting from a tripod. The tripod bush is also made of plastic, which means it will wear down faster than a metal alternative, but arguably not in the lifetime of the camera – unless you abuse it or use it heavily.

Start up times of the camera are pretty good. From cold, the L31 manages to get started up, focused and take a picture in 1.9sec. It's only marginally slower than higher spec cameras which run along an average of around 1.8sec these days. So that's a good result. Continuous shooting produced seven pictures in a 10 second time period, which gives an average of around 0.7fps (frames per second). It took the camera up to the 27 second mark to fully download those onto a Class 8 SDHC memory card and be ready to shoot again.

Playback on the Nikon Coolpix L31 is accessed via the Playback button on the back of the camera. This can be done regardless of whether the camera is on or off. When you first look at a picture you've taken, it will display basic information about the picture such as the time & date and file number. There's also a small emblem in the bottom centre of the screen. If you press the OK button while this is on screen, you can access a basic editing system in-camera. It allows you to add a certain number of effects and colour tones, such as Miniature effect, Fisheye and Cross processing colour tones. There's also a Soft focus look, Cross screen and two Toy camera effects. Highlight the effect you want and press OK. If you decide you don't want a filter adding, you can press Menu to back out without any changes taking effect.

When in Playback, there is a new menu tab which replaces the Camera and Video tabs we previously saw in the shooting mode. It allows a little more modification to your pictures such as adding D-Lighting (a dynamic range boost system) and Skin softening for portraits. It also allows you to make a slide-show, Protect images, Rotate and make them into smaller images. In this menu, the Set up menu is still present and the same as when in shooting mode.