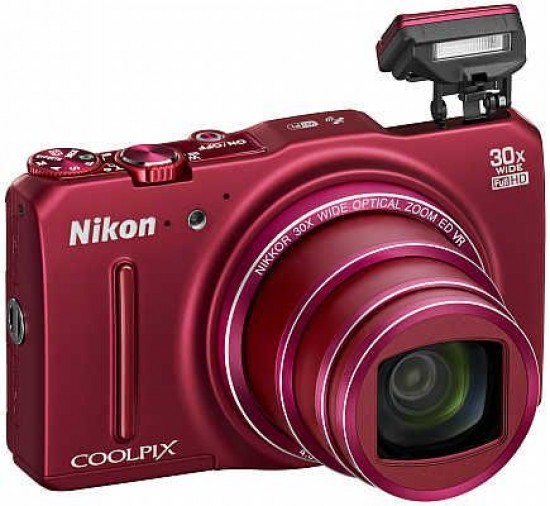 The Nikon Coolpix S9700 is the top of the range digital compact camera from the Style series. It features a back-illuminated 16 megapixel CMOS sensor, 30x optical zoom, FullHD video and a 921,000 dot screen to watch them on. The amount of tech in this camera is enough to make a robot cry. It certainly talks the talk and in this full review, we'll find out if it walks the walk. The Nikon Coolpix S9700 costs around £269.99 / $349.95 and is available in red, white and black.

Rising out of the Style range like a skyscraper in the suburbs is the Nikon Coolpix S9700. Packed with tech, the S9700 looks like it would be more at home in the Performance range. However, the P series of Nikon cameras are for keen enthusiasts and as such, don't really offer much in the way of easy modes for the point and shooters. The S9700 still offers the Easy Auto mode, albeit buried in a menu system.

The S9700 bears an uncanny resemblance to the more higher spec models in terms of shape and design. It's a heavy block of metal and plastic which holds a 30x optical zoom inside the bulge at the front. The lenses contain ED (Extra-low Dispersion) elements to reduce chromatic aberrations and the focal length works out at an eye bulging 25-750mm in 35mm terms.

We hear you asking “What about camera shake?” Well, the S9700 has been fitted with a 5-axis Hybrid VR. This type of Vibration Reduction of combining electronic and optical image stabilisers isn't new but using 5 ways of stabilising the image is on a camera at this designation.

Once the light has gone through the lens, it burns onto a back-illuminated 16 megapixel CMOS sensor. In the past, some Nikon compacts have suffered with low light and high noise problems, so hopefully, this new sensor that is lower in resolution than previous models will react better. The back-illuminated technology will also help by allowing more light onto each photo site, but our noise test will give the definite answer.

No expense has been spared on the screen incorporating a 921,000 dot OLED screen which can even be used in direct sunlight. We managed to get some glorious sunshine while testing the S9700 and we can confirm that this is certainly true.

As we mentioned earlier, the S9700 sits on the Style side of the fence. But it's so close to the Performance series, it can reach an arm through and tickle its armpits. Because of this intimacy with both ranges, the S9700 has a mixture of lazy modes and performance enhancing features. On the top plate, you'll find the power switch and shutter release with a tiny switch that operates that obscene zoom range. It's like striking a match and getting a bonfire burning at the end of your fingers.

Situated next to the shutter release on the shoulder of the Nikon Coolpix S9700 is a Command dial. It has the easy to use modes, such as Auto, Scenes, Smart portrait and Special effects but also holds the manual PASM modes. The top of the camera also holds the WiFi and GPS unit above the lens. On the opposite side to the Command dial is a pop-up flash that sits very high when open. That's great for avoiding red-eye. However, it uses so many different joints to collapse down into the unit – which you have to do manually – it's like trying to get a cat into a bath; it's possible, but you'll have to wrestle a bit.

Thanks to the aforementioned Command dial, there's no need for a Mode menu button on the back of the Nikon Coolpix S9700, so this has been replaced with a GPS button. It displays a map of the World and allows you to not only log your photo's locations, but also track where you're going. Fantastic for travellers and that's exactly who the S9700 is aimed at.

The menu will change depending on the mode that you're currently in. It has the usual layout of three sections with the primary menus tabbed down the left side. The centre section shows what each tab can offer, while the right side shows the current setting for that option. Pressing right drills into the menu and allows you to make any changes. The colour scheme is light grey on the centre section with dark grey surround and a yellow highlighter. Those colours may not sound appealing, but they work nicely and the menu is very easy to see and use. The five tabs on the left are for the mode you're currently in, Video modes, WiFi, GPS and the Set-up menu.

Start up time from the off position to being switched on, focused and a photo taken is 1.8sec which is a good performance. There are two continuous shooting modes; High and Low. The first is a burst mode that rapidly fires off five high resolution pictures in just over half a second. It works out roughly 8fps (frames per second). Slightly higher than the 6.9fps on the Nikon website, so that's pretty good. You do have to allow for human error, though, so keep an open mind. It takes a total of 10 seconds to download the pictures as well.

In Low mode, the camera takes pictures at a much slower rate. We got 16 pictures in eight seconds before the camera stopped to download. That's roughly 2fps and it took the camera up to 43 seconds to download and be ready to shoot again. This was going through the Nikon EXPEED C2 processor and writing onto a Class 4 Micro SD card in an adapter. The speed of the card will affect the write speed, so you may see a slight increase with a faster variation in.

In playback, the pictures will be displayed full size with some basic information that will disappear after a few seconds. Should you take a photo that you wish you'd added a digital effect to, you can press OK at this stage and add it on after. The added bonus is that the camera saves that as a separate file on the memory card, preserving the original. The layout of the Playback menu is the same as when you're shooting. However, there's a slight variation in the inclusion of the Mode tab.

The Playback modes are usually in a separate menu which is accessed via the Playback button. On the Nikon Coolpix S9700, doing that takes you back to the shooting screen. The Video menu has been replaced with the full Playback menu which allows you to amend the pictures with some basic editing via the Quick retouch, D-Lighting, Red-eye correction or Glamour retouch options. There's also provision to amend the print order, create a slide-show to thrill your family and friends of your travelling adventures.

In the top section of the box is a Quick Start guide which is in multiple languages. ViewNX 2 is now in downloadable format, which is a shame for those photographers with no internet connection. Below the guide is the camera, a lithium ion battery and charging unit. The unit consists of a USB cable, charging unit and three-pin UK adapter. This a much more flexible approach and one thing we like about all Nikon compacts. The cameras can be charged up via USB on the computer or by using one of the two plug options available to you.