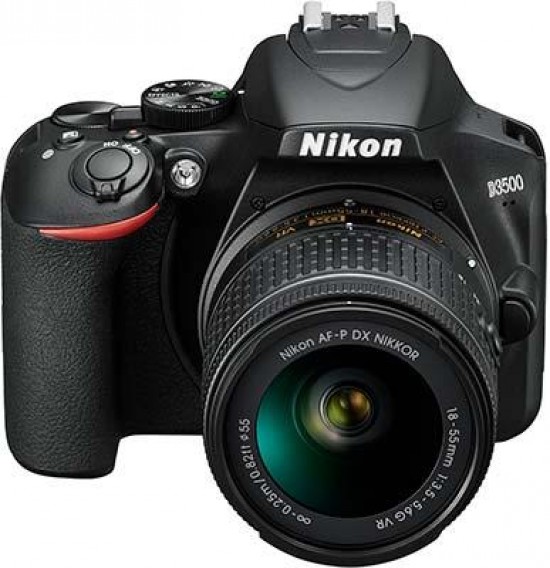 The Nikon D3500 is a new entry-level DSLR camera aimed at beginners which has a 24.2 megapixel DX format APS-C sensor with no low-pass anti-aliasing filter.

The main changes to the D3500 compared to the previous D3400 model are extended battery life, now up to 1,550 frames per charge, a smaller and lighter design, a deeper hand-grip, revised control layout, the ability to use Bluetooth to shoot remotely, and cheaper pricing in the US.

The Nikon D3500 is the opposite of many recent camera launches - inside it's very similar, offering almost exactly all the same features as its predecessor, the D3400 - but outside, Nikon have made it even smaller and lighter, given it a deeper handgrip, and relocated most of the external controls, so much so that it feels like a different camera (more like the D5000 series).

The Nikon D3500 is a tiny DSLR camera, weighing in at 45g less than the D3400 and and measuring 124 x 97 x 69.5 mm. It now has an even deeper right-hand grip with a pronounced lip at the top which is easier to keep a firm grip of. You'll still have to find a place for your little finger under the camera, though, if you have larger-than-average hands.

Despite the reduction in the size of the body, and despite using exactly the same battery, Nikon have somehow manged to extend the battery life from 1,200 shots on the D3400 to a whopping 1,550 shots on the D3500. We're not sure what kind of wizardry Nikon have employed to achieve this 30% increase in battery life, but it should see you through a full day's shooting without having to worry about carrying a spare.

The camera body is almost entirely constructed of plastic, but while the D3500 certainly doesn't feel as robust as some of the company's higher specified models, it still exudes a degree of quality you might not expect at this price point. This is helped by the surprisingly classy rubber coating on the grip, which also appears on the thumb rest on the back of the camera.

The AF-P DX NIKKOR 18-55mm f/3.5-5.6G VR kit lens that ships with the D3500 has a retractable design to make it more portable when it's not in use, something that quite a lot of compact system cameras have in their lens ranges. As a result the 18-55mm f/3.5-5.6 VR II is very compact when retracted to the L position, although of course you still have to extend it outwards to start shooting, which does slow you down.

It's also equipped with Nikon’s Stepping Motor technology for quick, smooth and very quiet autofocus, especially during live view shooting and video recording, and offers up to four stops of image stabilization. If the D3500 is your first venture into the world of Nikon DSLRs, we strongly advise opting for the kit with the AF-P DX NIKKOR 18-55mm f/3.5-5.6G VR lens, rather than the non-stabilised AF-P 18–55mm lens.

The Nikon D3500 is now very similar to the D5600 camera in terms of its control layout. Gone is the vertical column of controls that was positioned on the left-hand side of the LCD screen, with those 5 buttons relocated over to the right-hand side. As a consequence the D3500 looks very much like the D5600 from the rear, with the main difference being the D5600's tilting LCD screen. We actually prefer the layout of the D3500, which is more logical than the D3400 due to having all the main controls grouped together and operated with your right thumb.

The D3500 also inherits the D5600's Live View lever. This is a fore-finger operated spring-loaded switch on top of the body that is pushed downwards and toggles between turning Live View on and off. Positioned next to the Shooting Mode dial, it allows you to enable Live View whilst holding the camera at arms length with one hand, or to turn it off as you hold the camera up to your eye. We'd actually prefer it to be on the rear of the camera and also to incorporate the Movie record button, in keeping with the D3400/D7200 models, but there's not really any room to do that on the D3500 given the relocation of the other controls.

From the top the D3500 also closely resembles the D5600, with the same On/Off switch surrounding the shutter release button, one-touch movie and exposure compensation buttons behind that, the shooting mode dial with the afore-mentioned Live View lever, and the unmarked rear control dial - all located in the same places as on the D5600.

The D3500 has lost a couple of controls from its front plate, though, with the flash release button moving to a more logical position to the left of the viewfinder on the rear of the camera, and the Function button from the D3400 unfortunately disappearing entirely, presumably in the interests of simplifying the controls.

Also unfortunate is the removal of the InfraRed receiver port from the D3500's handgrip, which means that you can no longer fire the camera using a wireless IR remote control. You'll instead have to use the camera's Bluetooth connectivity and its new ability to remotely fire the shutter on the D3500 using the Snapbridge app (and therefore have a smartphone), as there's no dedicated port for a wired remote release either, or a cable remote that uses a USB connector.

The Nikon D3500's Bluetooth connectivity continues to allow you to send your images to a smartphone using Nikon's Snapbridge app. This app is available for both iOS and Android devices, and it uses Bluetooth Low Energy (BLE) to create a connection between the D3500 and a compatible smart device. Once paired, the D3500 will remain connected to the smart device and transfer photos automatically, without the need to re-connect the devices each time.

You can choose to either set all images to automatically download as they are captured, or tag individual images for transfer in-camera. Images that are synced while you shoot are automatically resized for easier sharing, and the D3500 can even sync with your smart device while it’s in sleep mode. Nikon SnapBridge users can also access Nikon Image Space, a free online image sharing and storage service.

The Nikon D3500 follows conventional DSLR design in having a shooting mode dial on the top of the camera, which allows you to select either one of the advanced modes like Manual, Aperture- or Shutter-priority, or a number of beginner-friendly scene modes.

The Guide mode first seen in the ancient D3000 has again been carried over. It includes sample images to help you to identify the shot, while options in the Advanced operation menu help you to reduce blur or soften backgrounds. The main purpose of the Guide mode remains the same as on the previous D3000-series cameras, namely to teach beginners about what settings to use in a number of shooting situations, and how these settings influence the final output. Nikon deserves kudos for this, as a mode like this can teach beginners a lot more about the basics of photography than the green Auto mode in which the camera assumes control of almost everything.

The Effects shooting mode is once again included on the D3500 and provides 10 different filters that can be applied to both still images and movies. The Night Vision effect is particularly worth of mention, pushing the camera's sensitivity to a whopping ISO 102,400, although a monochrome rather than colour image is recorded.

For stills, you can enter the Live View mode to preview the effect or simply use the optical viewfinder. For movies, the recording is slowed down (dependent upon the chosen effect) as the camera uses a lot of processing power to apply the effect, leading to footage that can have a rather staccato feel. Note also that the camera sets virtually everything in the Effects mode - exposure, shutter speed, white balance, ISO, file type and quality - so its only creative in terms of the arty effect that's applied. Several of the same effects can be applied to an image or movie that you've already taken, though, so you can have the best of both worlds (albeit without the luxury of a preview).

The Exposure Compensation button is thoughtfully positioned next to the shutter release. Hold down this button with your right forefinger and spin the control wheel on the top-rear of the camera with your thumb to adjust its settings - simple and intuitive. In M mode, this easy-to-reach button allows you to toggle between aperture and shutter speed settings, making the lack of a second control wheel on the front of the camera less problematic.

The D3500 has the same through-the-lens optical viewfinder as the D3400, offering 0.85x and 95% frame coverage. The positions of the 11 autofocus sensors are permanently but unobtrusively marked on the focusing screen with 11 tiny dots. In single-point AF mode - in which you can specify which AF point the camera should use - the active autofocus point lights up in red upon a half-press of the shutter release. The other available AF area modes include Auto Area, Dynamic Area and 3D Tracking. Autofocus speeds with the VR kit zoom were snappy, and focusing with the optical viewfinder is significantly faster than in Live View mode.

The LCD screen on the rear is also exactly the same as on the D3400, measuring 3-inches in size and having 921k-dot resolution. As mentioned above, it's fixed in place rather than being articulated or tilted, which is one of the key differences between the D3500 and the step-up D5600 model.

The Nikon D3500 features a 1080p Full HD “D-movie” mode, so there's no 4K video recording at this price-point. At the highest resolution setting, the camera can record movies at 60p/50p/30p/25p/24p, while at 1280x720 pixels you can choose from 60p/50p. The Nikon D3500 offers full-time autofocus in movie mode, but you may quickly decide to turn this feature off. For one thing, the sound of the focus motor in the lens gets picked up by the microphone. For another, the subject may go out of focus for no apparent reason. If you really want to make sure an erratically moving subject stays sharp throughout the clip, you had better stop down the lens for enough depth of field to work with, and leave all shallow-depth-of-field trickery to static or predictably moving subjects.

There is an element of exposure control when shooting movies. Both the aperture and the shutter speed can be pre-set before you start filming and changed whilst shooting. By default, exposure changes with subject luminance while capturing a clip, although you can at least lock exposure by holding down the AE Lock button. The camera does not provide any special feedback on focus or highlight blow-out (i.e. no “peaking” or “zebras” as in professional video cameras), but there is manual control over audio levels and sound is recorded by way of the built-in stereo microphone. Videos are compressed using the H.264 codec and stored in a MOV container.

That concludes our look at the D3500's features and controls - in summary it's smaller and lighter than its predecessor with a more logical control layout, but it has lost a couple of features, most notably the Infrared port and Function buttons from the front of the camera, while we preferred the D3400's Live View button versus the D3500's Live View lever.

Now let's take a closer look at the Nikon D3500's image quality on the next page...