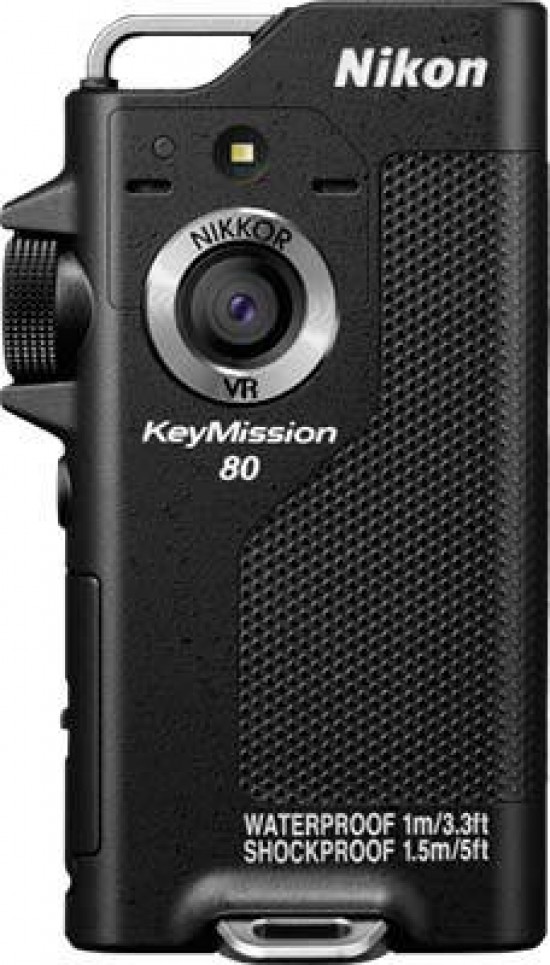 The Nikon KeyMission 80 is not shaped like a conventional camera at all, having a thin rectangular body. It almost looks like a dictaphone, or a very small mobile phone.

Unlike the KeyMission 170, the 80 has a touch-sensitive screen, via which most of the operations are carried out.

The lens on the front of the Nikon KeyMission 80 doesn’t jut out at all, while the second lens, on the back of the camera has a much smaller circumference.

On the right hand side of the camera, there is a switch which you can use to turn between shooting stills and shooting video. Directly underneath this switch is a menu button - hold this down and you’ll switch on the camera.

Switching to the back of the Nikon KeyMission 80 and most of it is taken up by the 1.75-inch screen, through which you compose your images and change settings. There is also a large shutter release button underneath the screen, which you can also use to turn the camera on by holding it down. Whether you’re in stills or video mode, you just need one push of this button to start recording, or to take a picture.

On the screen itself there’s a virtual playback button, and a button which switches from using the front camera, to using the rear one - the latter of course designed for shooting self portraits.

When you press the Menu button, you’ll be greeted with a variety of options. If you press the top left icon, you’ll simply be taken back into the shooting mode, while the top right icon and you’ll go to playback. While in playback, you can swipe left and right to move between the images, zoom in, zoom out, and erase any pictures you don’t want. You can also press menu again and you’ll be given the option to lock a picture to to mark it for upload when you’ve connected to a smart device, such as a phone or tablet.

To go back to the main menu, you’ve got an option for what the Nikon KeyMission 80 can do when it’s in its holder (we’ll come back to that shortly). You can also change “scene” mode - there’s only normal, easy panorama and HDR to choose from. If the mode switch is in the movie configuration, this will instead show you the options for creating time lapse movies.

The second to last option is the more extensive menu, where you can change a variety of settings, including shooting options (which includes the ability to change white balance, colour options, exposure compensation). You can change the aspect ratio, of still images, or make changes to things such as date and time, sound settings, auto off, format the memory card, switch on touch shooting, the language of the camera and so on.

It’s also here that you’ll find the network menu, where you can set up wi-fi or bluetooth connectivity. The camera has SnapBridge, Nikon’s Bluetooth connection solution. You’ll need the standard SnapBridge app, rather than the one which is designed for the KeyMission 360 or KeyMission 170 cameras to use with the KeyMission 80. Once connected - just follow the instructions on the KeyMission 80’s screen and your phone’s screen, the camera will maintain a low power connection with your smartphone. That means that your photos will automatically be transferred to your phone ready for sharing online and the like. It makes sense to have the images automatically resized for quicker sharing, but you can change the setting to have them transfer at full resolution if you prefer.

Connecting the Nikon KeyMission 80 to your smartphone also means that the clock on the KeyMission will be synchronised, and it will also tell the camera your location, making it easier to locate your images when you get back home.

The final option available when you press the main menu button is to switch the camera off.  This is the only way to switch the camera off, but it will turn off automatically, depending on the setting option you’ve got selected. By default, that’s just 5 seconds, which is a little short - I’ve found changing it to 30 seconds is more realistic.

A small LED light just above the front facing camera can be switched on for help when shooting in dark conditions. To switch it on, hold down the menu button for a couple of seconds when the camera is switched on.

A strap and a holder is included in the Nikon KeyMission 80 box, which you can use to attach the camera to a backpack. When you release the camera from the holder, it automatically switches on ready for you to shoot whatever you’ve come across. Alternatively, if you press the menu button, then the third option, you can us the route shooting setting. This will take 100 stills, or 10 three-second movies within a specified period. The movies are combined into a single movie around 30 seconds long.