The PC-E Nikkor 24mm f/3.5D ED is the first wide-angle tilt-shift lens from Nikon. While the company was first to offer a shift lens for a 35mm system camera, its wide-angle PC (Perspective Control) lenses lacked a tilt functionality until this lens came along. Tilt-shift lenses are specialised tools that allow some view camera movements to be replicated on an SLR camera, and are thus of great interest to architectural and landscape photographers. At nearly $2,000 the PC-E Nikkor 24mm f/3.5D is not a cheap option, so we were curious to find out how it performed at the tasks it will most often be used for. 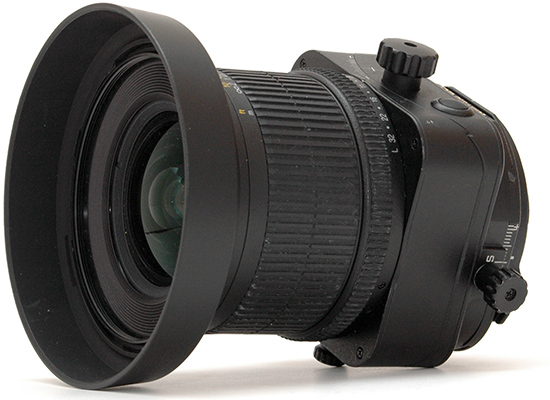 The Nikon PC-E Nikkor 24mm f/3.5D is fairly big and heavy for a medium-speed wide-angle lens, but not for a tilt-shift lens - it's actually 60 grams lighter than Canon's comparable TS-E 24mm f/3.5 II. Still, it feels very robust and dense with metal and glass. If you've never seen a tilt-shift lens before, it may even appear somewhat intimidating at first sight with its strange protrusions, knobs and locks. Our review copy has already seen a lot of apparently heavy use, as you can see from some of our product images, but worked flawlessly in the field. The lens comes with the HB-41 hood, which you can also see in the photo above.

Unlike most other recent lenses from Nikon, the PC-E Nikkor 24mm f/3.5D features an aperture ring. The ring is electronically coupled to the iris diaphragm, and is way too easy to spin, so you always need to double-check if it's in the intended position before taking a shot. The lens has its own depth-of-field preview button, which stops it down to the working aperture.

The lens also has an engraved distance scale, with depth-of-field marks for f/8, f/16 and f/32. The focus ring is wide and ribbed, and very smooth in action. Focusing is internal, meaning the length of the lens does not change, and the filter thread does not rotate on focus. Autofocus is not available with this lens. 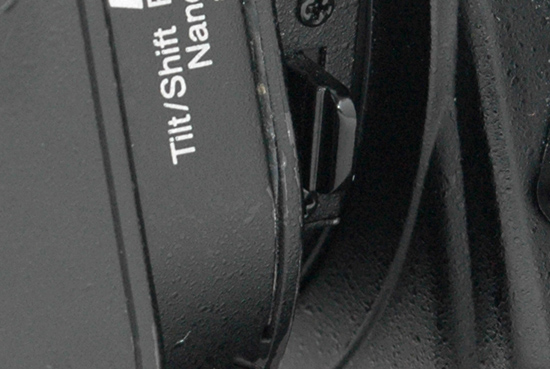 Holding down this release lock allows you to rotate the lens

Besides shifting and tilting, the PC-E Nikkor 24mm f/3.5D also rotates 90° in each direction from its zero position. The small release lock seen above has to be held down in order for you to be able to turn it. Note that this lens has only one such tab, whereas its Canon counterpart has two, allowing for independent rotation for tilt and shift. We have found that the one on the Nikon lens is a bit too close to the lens release button on the camera – watch out for this in order to avoid pushing the wrong button.

There are a number of movements made possible by this lens, whose purpose may or may not be clear to you. In the following sub-sections we will try to explain these to those unfamiliar with the terminology. 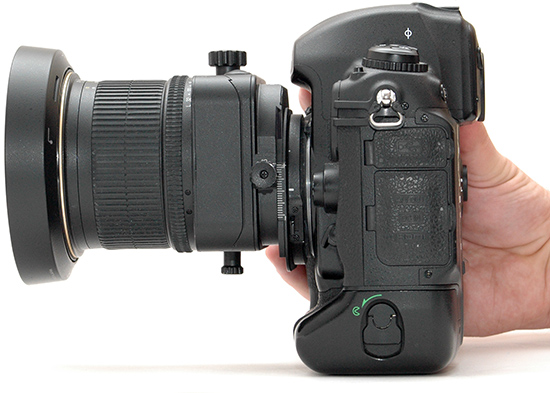 First and foremost, the lens can be shifted up or down by up to 11.5 millimetres. The upward shift is commonly referred to as 'rise', whereas the downward shift is called 'fall'. A large knob, coupled to a worm drive mechanism, is used to shift the lens while a smaller locking knob on the opposite side of the lens allows you to lock the lens in the desired position. Next to the shift control knob is a scale marked in 1mm increments.

This is all nice and well, but why do you need this functionality in the first place? Well, if you have ever photographed buildings, especially tall ones, I bet you have encountered this problem at least a couple of times: the buildings seem to be leaning backward, with their originally vertical lines converging towards the top. This is caused by tilting the camera upward to get rid of the foreground and allow the building to fit in the frame. When you tilt the camera, the sensor plane is no longer vertical, and this is what causes this so-called keystoning effect. In order to keep your verticals vertical, you have to hold the camera perfectly level, but with a regular lens attached, this may mean that the top of the building won't fit in the frame and you'll get too much unwanted foreground. (Or, if you are shooting from a vantage point, you may lose the bottom of the building and get too much sky in the frame.)

Enter rise/fall. A shift lens projects an imaging circle that is oversized relative to the sensor, allowing it to be shifted without vignetting raising its ugly head (except at full shift – more on that later). Now, how can a movement of just a few millimetres make such a difference in framing? The following illustration, where the circle represents the lens' imaging circle and the red rectangle denotes the sensor or film frame, hopefully makes it clear. (Taken from our article, How to Avoid Converging Verticals) 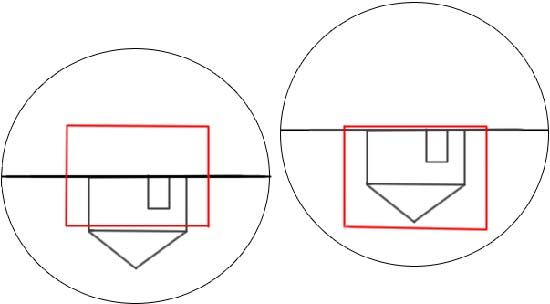 The reason the house is depicted upside down is that this is how the lens projects its image onto the sensor. Notice that the red rectangle, which represents the sensor or film frame is at the same height in both illustrations – just as in reality, where it stays put while the lens is shifted upwards. The projection of the scene shifts along with the lens and its imaging circle, so a different part of it falls onto the sensor – in this case, the entire house from top to bottom rather than the bottom part of the building and some foreground, as is the case with the lens un-shifted.

For best results, you will want to mount the camera on a tripod with a three-way head complete with bubble levels, but hand-held photography is also possible. Most of our sample images found on the third page of this review were taken using various amounts of 'rise'. 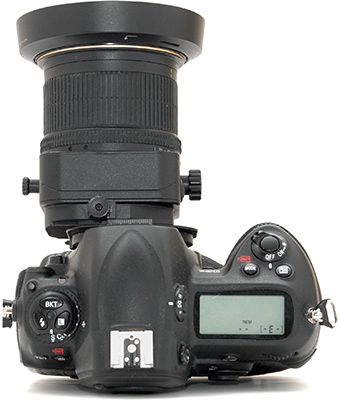 If you rotate the lens by 90°, you'll get horizontal shift instead of rise/fall. If you need to shoot a mirror – or any other highly reflective object that works like a mirror – front on without the camera's reflection being seen in the picture, a bit of shift to the left or right can come in handy. For example, have a look at the following image that has a telly in the middle. 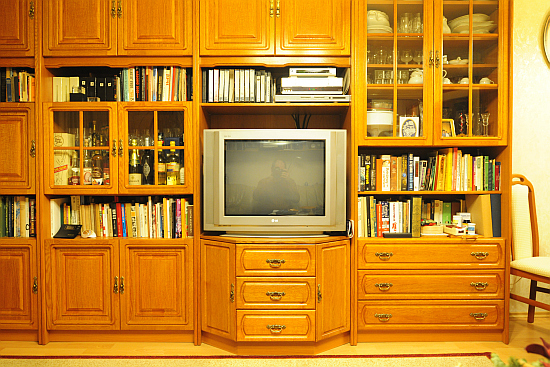 Uh oh. You can clearly see the photographer's reflection in the TV screen. Now let's see what happened when I moved a bit to the left, and applied some shift to the right! 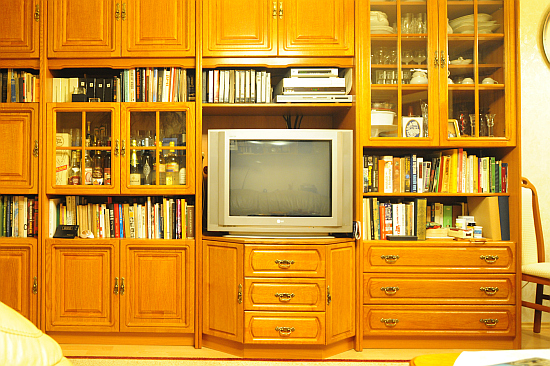 While my change in position has brought some foreground objects into the frame (this wouldn't happen in a more spacious room), the shift to the right allowed the TV set to remain in the middle of the photo. And my reflection is now gone.

Other uses for horizontal shifts include stitched panoramas. Instead of turning the camera around as you normally would to capture the source images for the final panorama, you can simply shift the lens once to the left and once to the right, and stitch the resulting images with ease. 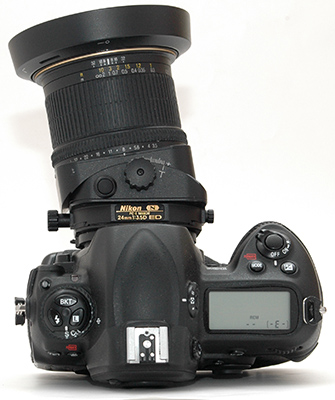 Tilting the lens sideways is termed a 'swing', and changes the plane of focus, which is normally parallel to the sensor plane. This has two uses. Firstly, you can have only a very thin slice of the image in focus for creative/artistic effects. 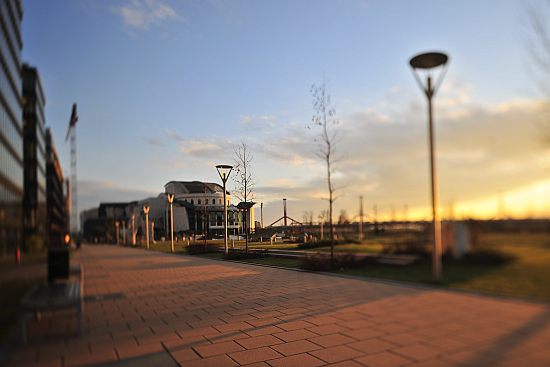 Secondly, you can have a plane that is at an angle to the camera, such as the wall of a building, completely in focus without having to stop the lens down too much.

On the PC-E Nikkor 24mm f/3.5D ED lens, there is a knob that controls swing, with firm detents at the zero position and the two extremes. The maximum swing is 8.5°. 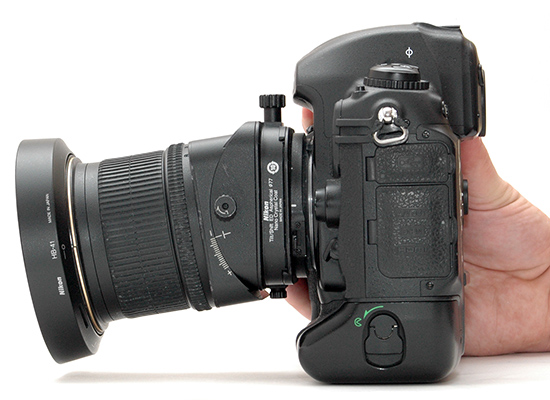 Strictly speaking we talk about a 'tilt' when you tilt the lens up or down. In order to access this functionality, the lens has to be rotated by 90° from the zero position. After that, you can use the same knob that controls swing to set the desired amount of tilt.

Similarly to the sideways swing, tilting the lens up or down moves the plane of focus relative to the sensor plane. With a downward tilt, one can take advantage of the Scheimpflug principle. This says – in its simplified form – that when the sensor plane, the lens plane and the image plane intersect in a single point (actually, a single line, but never mind) at somewhere near your feet, everything in the image plane will be in focus. This is a real boon to e.g. landscape photographers, who can have perfect near-far focus without having to stop the lens all the way down and losing resolution due to diffraction.

Here's an example: the first shot was taken with no tilt, and the lens stopped all the way down to f/32 for maximum depth of field. 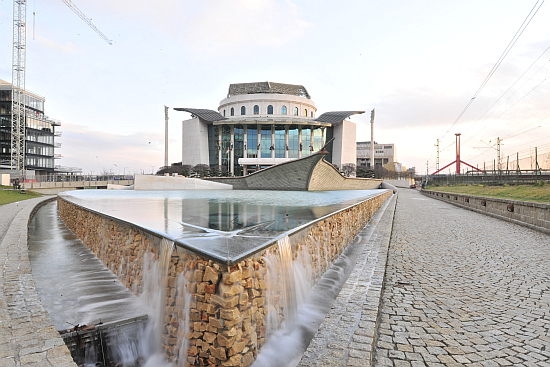 Have a look at these crops – as expected, they are uniformly sharp but lack resolution and fine detail due to the massive diffraction that occurs at f/32:

Now let's see what happens when we tilt the lens downward by just the right amount for Scheimpflug: 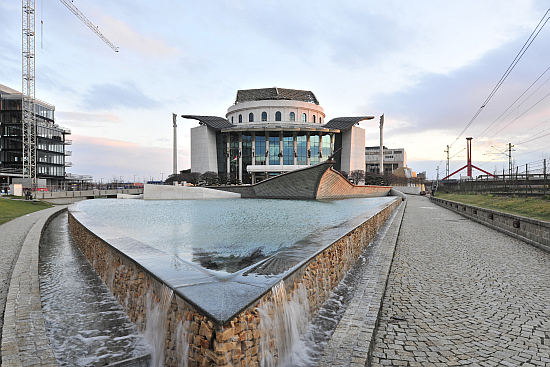 The framing is slightly different due to the tilt, but the difference is not nearly as dramatic as with rise/fall. Let us now examine the details at f/8, which is the sweet spot of this lens:

If we hadn't tilted the lens, one of these crops would be massively out of focus due to the relatively limited depth of field at f/8. Tilting the lens by just the right amount, we get both uniform sharpness AND much better resolution/detail than at f/32.

As you would expect from a lens designed for architecture, chromatic aberrations are kept in check – although you can spot them in a few photos if you look closely.

With the lens un-shifted, there is actually less corner shading than we've got accustomed to seeing with full-frame lenses – no surprise given the oversized imaging circle.  At maximum shift, however, one can see very obvious vignetting, as shown in the example below. For more examples, have a look at our sample images. 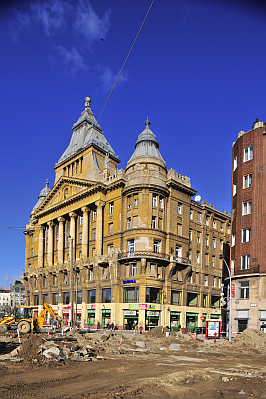 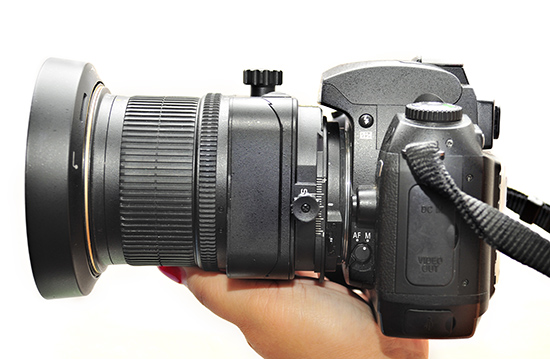 Houston, we have a problem

The PC-E Nikkor 24mm f/3.5D ED lens works without limitations on the Nikon D3X that was provided for this review, but this cannot be said of other Nikon cameras. If you mount it on a body that has a pop-up flash – like the Nikon D70 shown in the shot above – you will not be able to shift it all the way up, because the flash housing gets in the way. In other positions, you'll have problems with the tilt/shift control knobs. This is sad because the lens would make perfect sense on a DX body as well (the 11.5mm maximum shift is actually greater relative to the smaller DX sensor, and the reduced angle of view still makes sense for architectural photography). I suppose that the D1, D1X, D1H, D2X and D2H bodies, which have no built-in flash, work well but these models were discontinued long ago.

The other compatibility issues concern the diaphragm control. Modern pro Nikon bodies like the D3X have no problem stopping down the aperture to the f-stop selected on the aperture ring for exposure, but older and cheaper DSLR bodies require you to use the depth-of-field button on the lens manually before hitting the shutter release (this was certainly the case with the D70). On old film bodies, this solution will not work because the button is not mechanically coupled to the iris diaphragm.

These limitations mean that you effectively have to own a Nikon D3. D3S or D3X to have the lens work the way it should. On some other current camera models, the lens can be used with the caveats mentioned above, while on older film bodies, it is just about useless.