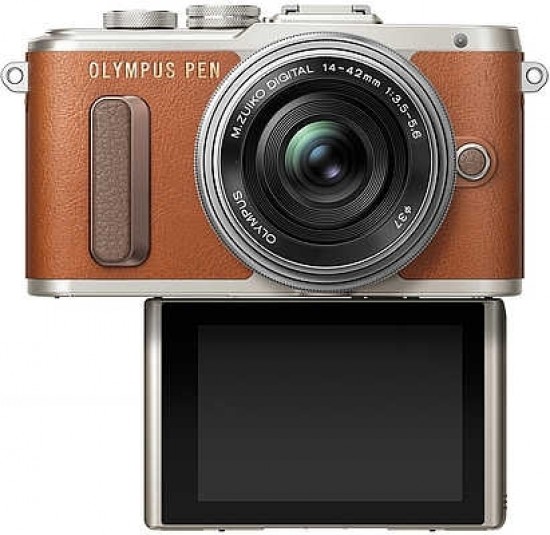 The Olympus E-PL8 is a new compact system camera from the brand, which sits in the entry-level or beginner line-up. It is aimed towards bloggers, and has many features which may appeal to those who run their own websites. In many ways it remains unchanged in terms of specifications from the E-PL7. It features the same 16.1MP Live MOS Four Thirds sensor, and the same TruePic VII imaging engine. Other interesting features include inbuilt Wi-Fi, full HD video recording, a tilting touch-sensitive screen and a range of digital ‘art’ filters which can be applied to your images. The Olympus E-PL8 retails for $649 / £499.

Just like the E-PL7, the Olympus E-PL8 is being labelled as the “stylish one”, designed to particularly appeal to fashion conscious photographers - indeed fashion bloggers have been particularly targeted for its launch as Olympus has found success with this demographic in the past.

While the camera remains relatively unchanged when it comes to specs, the exterior has seen some tweaks in the design which give it a rounded, more sophisticated look. It has a super sleek design, and is available in three different colour ways - the white and silver version supplied to us is a Jessops exclusive, while the tan variant can only be found in John Lewis. The black and silver version is available in all shops.

There’s a luxurious leather-style coating around the whole camera, with gold (in our case) engraving for the OLYMPUS PEN name on the front of the camera - all of it adding to the stylish finish of the camera. On the front there is a protruding strip which helps your finger to grip the camera - this is joined by a raised thumbrest on the back of the camera.

On the top of the Olympus E-PL8 is a couple of dials. There’s a mode dial for choosing between the different exposure modes available, such as automatic and semi-automatic modes (such as aperture priority). There’s also a scene mode, art mode, video mode and a mode for creating images with frames around them.

The second dial on top of the camera is used for a variety of functions depending on which shooting mode you’re using. So, for instance, if you’re using aperture priority mode, you can use it to adjust aperture, or shutter speed when shooting in shutter priority. The shutter release button is found in the middle of the dial, which is a little recessed making it a natural place for your finger to rest.

The final feature of note on the top of the Olympus E-PL8 is the hotshoe, which you can use to plug in a variety of accessories, such as external viewfinder (there is no inbuilt viewfinder at all on the E-PL8). The flash unit, which comes in the box, is plugged into the hotshoe, if you don’t attach the flash, then you won’t be able to take any flash pictures without it as there isn’t anything built into the body of the camera itself.

As this is a camera aimed at beginners, it’s not surprising that there’s not a huge array of buttons and dials on the camera. Flipping to the back of the camera sees a variety of fairly standard button offerings. The buttons are fairly small, so you need to be quite precise when using them. There’s a four-way navigational pad, with each key having its own specific function. The up button you press if you want to adjust exposure compensation, the left button you can press to bring up the AF point selection options, the down button is used for drive mode or to activate the timer, while the right button is used to activate the different flash buttons (when the flash unit is attached).

There is also a menu button - for accessing the main menu, a delete button, a playback button and an info button, which changes the display. There’s also a video record button which is positioned well to avoid accidentally being knocked on and creating movies when you don’t want to.

Just above the thumb rest, the two final buttons are a function button, and a magnifying glass button. The latter button can be used to increase the focusing view, which is useful for macro and fine subjects. It can also be used to zoom into photos in playback.

If you press the OK button in the centre of the four-way navigational pad, then you’ll be able to access a quick menu which gives you a faster route to some of the more commonly used settings. This is particularly useful on a camera such as this where there’s no direct button for settings such as ISO or white balance. You can also add art filters, change the aspect ratio, metering and so on via this menu.

The main menu, like many Olympus menus, is a little confusingly laid out. If you never have used an Olympus camera before you may find you need to spend a bit of time getting acquainted where everything is - it’s not always immediately obvious.

Despite the fact that the camera is mirrorless, there’s no way to activate a silent mode with the Olympus E-PL8. Unlike the Olympus PEN F which has a variety of different drive modes thanks to having both an electronic and mechanical shutter, including silent or anti-shock, you can’t switch off the shutter sound of the E-PL8. This isn't a problem in most cases, but if you’re photographing somewhere quiet, such as a church, then you won’t be able to be as conspicuous as you might have liked to be.

The screen on the back of the Olympus E-PL8 is touch-sensitive, and you can use it to set the AF point, or focus and trigger the shutter with one touch. You can use it to move through images in playback, but you can’t use it with either the quick menu or the main menu. The screen tilts to face upwards, which is great for shooting low down. It also tilts completely forwards, but rather than doing that above the camera, it does it below the camera. This has the advantage of being completely unencumbered by any part of the camera, but it also means you can’t really use the camera with a tripod as the tripod will hinder your view of the screen. The screen can also be tilted in such a way as to make “flat lays” easy - that is, pictures taken from above of a table top with products etc on it - something which is popular with fashion bloggers.

If you place the Olympus E-PL8 with the screen facing forwards then ‘selfie mode’ will be automatically activated. This displays a virtual shutter release button, alongside a video record button on the screen to make it simple to take a quick photo without having to use the physical shutter release.

The camera comes with the 14-42mm kit lens. This retracts into itself when not in use, making the overall package size of the camera and lens very small - it could probably fit in a reasonably large jacket pocket altogether. There are many different Micro Four Thirds lenses available for the system, including those made by Panasonic and third-party manufacturers (such as Sigma). The images in this review have been taken with a mixture of the kit lens and separate optics (from Olympus and Panasonic).

Generally speaking, autofocus speeds are very good. In bright light, the Olympus E-PL8 snaps into focus pretty much instantly. If the light is lower, then you may see some back and forth motion as the lens acquires focus, but it’s very rare for a false confirmation of focus to be achieved. There’s an green dot in the corner, which will blink if focus has not been achieved - it will be steady when it has.

Start-up time is pretty quick, with a slight delay if you’re using the kit lens as it needs to extend first. You can leave the camera switched on if you want to take a series of photos in reasonably quick succession.

While the Olympus E-PL8 can shoot at 8.5fps, and there is a continuous autofocus option, this isn’t really a camera designed for shooting fast moving action. It can keep up with something moving reasonably slowly, but anything more challenging than that and the camera will struggle.