The Olympus M.ZUIKO Digital ED 12-50mm f/3.5-6.3 EZ is the first weather-sealed lens in the Micro Four Thirds system. Offering a 35mm equivalent focal range of 24-100mm, the Olympus 12-50mm f3.5-6.3 incorporates a near-silent, variable-speed electromagnetic zoom mechanism, fast and quiet auto focus and an optical formula comprising 10 elements in 9 groups. Other highlights include a dedicated macro button with zoom lock and minimum focus distance of 20cm, plus an L-Fn button that can be used to temporarily suspend continuous auto focus when something suddenly comes between the lens and your intended subject while recording video with your camera. As of writing, the Olympus 12-50mm f3.5-6.3 lens retails for £349/$499 in the UK and the US, respectively. In the near future, the lens will also be available in a kit with the new Olympus OM-D.

While Olympus has been offering a number of dust-and-drip-proof lenses for the “regular” Four Thirds system - starting with the very first duo of zooms that accompanied the launch of the Olympus E-1 back in 2003 -, the M.Zuiko Digital ED 12-50mm f3.5-6.3 is the first weather sealed lens with a dedicated Micro Four Thirds mount. Note however that in order to take full advantage of the weatherproofing, you will need to mount it on a similarly sealed body. 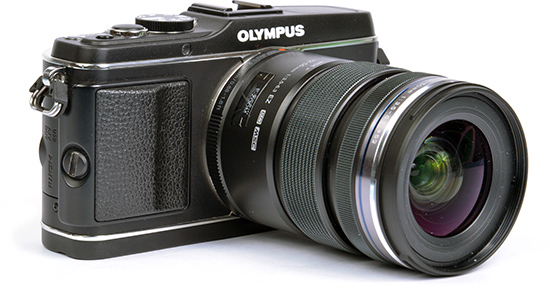 The Olympus E-P3 used for this test is a great match for the lens, offering good balance and fast auto focus (but no environmental seals). The M.Zuiko 12-50mm lens itself is well built, though the plastic outer covering feels a wee bit cheap to the touch.

In terms of features, the lens has quite a lot to offer. For starters, it has a so-called L-Fn button, which allows users to temporarily suspend continuous auto focus when something suddenly comes between the lens and your intended subject. This is mostly useful when shooting a movie clip with C-AF enabled, but the feature can also be used when photographing action. Secondly, the Olympus 12-50mm lens has a multi-position zoom ring linked to a new electromagnetic zoom mechanism. The ring has three positions, labelled M-ZOOM, E-ZOOM and MACRO. 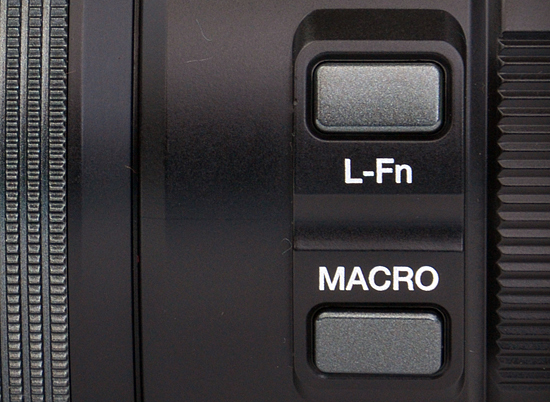 In “M-ZOOM” mode, it can be used in very much the same vein as a mechanically coupled zoom ring. It's very responsive and quite smooth, and there are even hard stops at both ends of the zoom range, preventing the ring from turning indefinitely. Push the zoom ring forward, and you'll enter “E-ZOOM” mode, ideal for videography. In this position, a slight turn of the zoom ring enables you to zoom slowly - which is usually preferred for video -, while a more “resolute” twist allows faster zooming. The zooming action is very smooth and even in both cases. Note that there is no zoom scale on the lens barrel, but the change of focal length can be monitored in the camera's LCD screen (or EVF if it has one). Zooming is fully internal, so the length of the lens always stays the same. 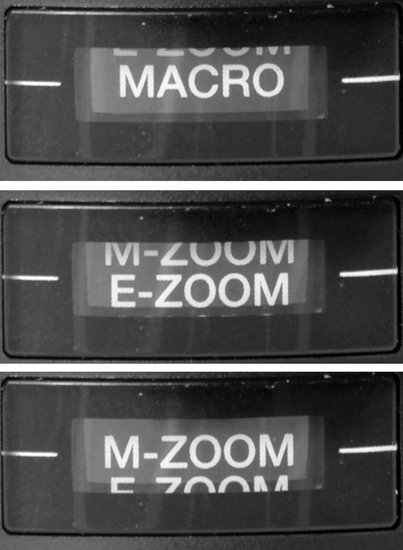 In order to access the third mode - Macro - you need to depress and hold the Macro button while pushing the zoom ring all the way forward. At first I thought you needed both hands for that, but I later discovered that you can accomplish this by using your left thumb to press and hold the button, and your left index and middle fingers to move the ring. In this position, the zoom ring is locked at the 43mm focal length, while focus is limited to the 20-50cm range. Olympus says the smallest area you can fill the frame with is 48x36mm but we have found you can achieve an even higher magnification in actual use (see Macro section below).

The Olympus M.ZUIKO Digital ED 12-50mm f/3.5-6.3 EZ lens features a 52mm filter thread and a front bayonet for attaching the separately sold LH-55B hood. The filter thread does not rotate on focus, which is great news for anyone intending to use a polariser or ND grads on the lens. 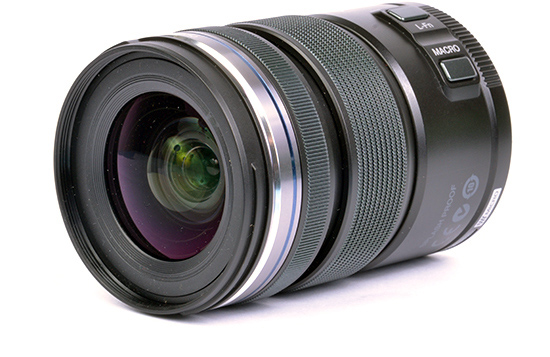 The lens comes with a standard Micro Four Thirds mount that is, thankfully, made of metal. Communication between lens and camera body is provided through eleven electrical contacts. 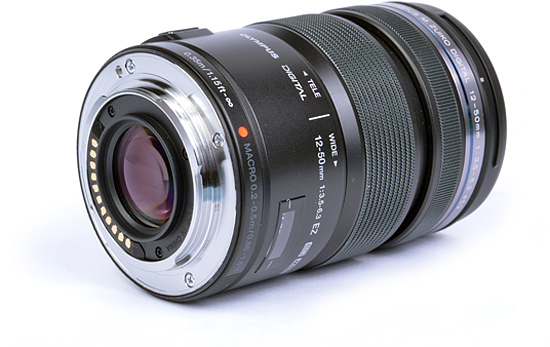 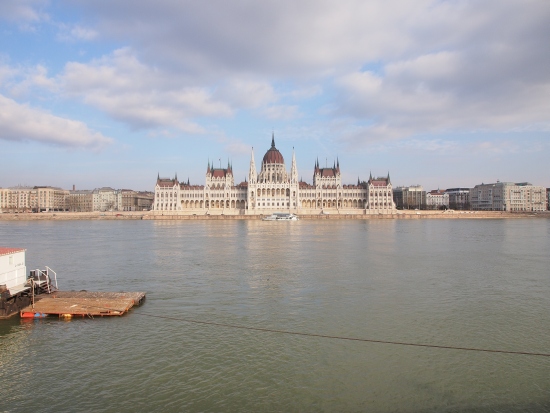 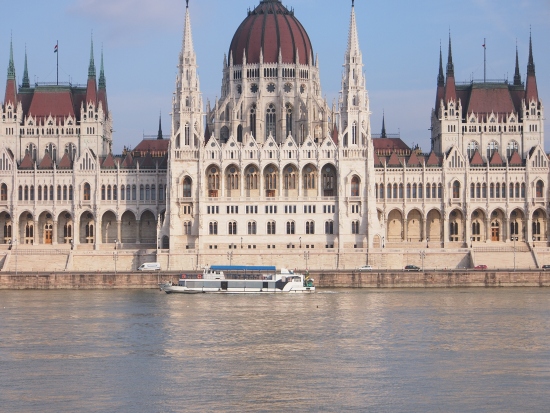 When shooting HD/FullHD movies, you lose a bit of diagonal and vertical angle of view, but the range still remains useful. You can see a demonstration of the lens' zoom range in this short video:

Olympus and Panasonic bodies - as well as most raw converters - correct geometric distortion automatically. Even the live image seen on the LCD screen or through the electronic viewfinder - if your camera has one - is auto-corrected for distortion. In the case of the 12-50mm Olympus M.Zuiko Digital lens, the correction is highly successful, with only a bare minimum of “residual” barrel distortion detectable in photographs taken at the wide end of the zoom range. 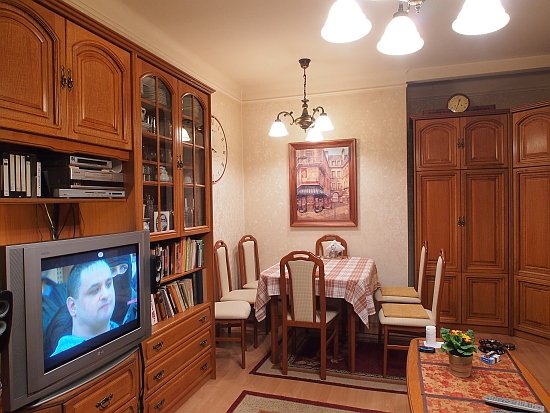 Some raw converters - such as Raw Therapee - can show you the uncorrected image which, in the case of this particular lens, tends to have more distortion to it, at least at the 12mm setting. The upside is a somewhat wider field of view. 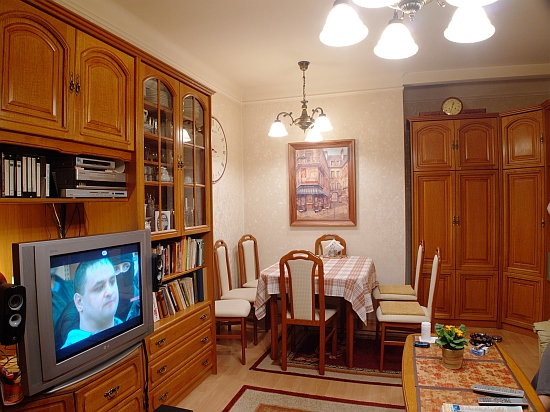 With the 12-50mm lens attached to an Olympus E-P3 body, focusing is extremely quick in most situations. As seen in the video below, the camera-lens combo is capable of locking focus on a subject almost instantly, even when alternating between close and faraway subjects (in this case, the flowerpot in the foreground was about four feet away from the camera, and the buildings in the background were at infinity). Positioning the AF frame between two focus tests took some time - in retrospect, I think I should probably have used Touch AF for this - but focusing itself was usually accomplished in a split second.

Continuous auto focus is remarkably good too - check out the photo of the cyclists in our sample images section. That doesn't go to say all your images of moving subjects will be in sharp focus, but it's still a great result for a contrast-detect AF system. (Note that this may not apply to using the lens on an older MFT camera body.)

In extreme low-light situations you may experience some focus hunting at the long end, as the f/6.3 maximum aperture does not always allow enough light to pass through to the sensor.

Manual focusing is done in a “focus-by-wire” fashion, as the thin focus ring is not mechanically coupled to the moving lens elements. The lens does not feature a distance scale. Like zooming, focusing is fully internal and the filter thread does not rotate on focus.

Chromatic aberrations, typically seen as purple or green fringes along contrasty edges, are visible at the 12mm setting but are less pronounced than in the case of, say, the M.Zuiko Digital 9-18mm lens. At other focal lengths you're unlikely to run into problems with CA.

There is only a minimum of light fall-off in the corners, which you will probably not even notice in your real-world photos. 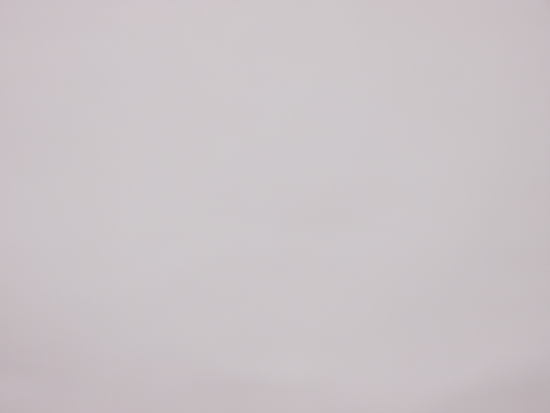 The M.Zuiko Digital ED 12-50mm f/3.5-6.3 EZ lens has a splendid macro mode. As noted above, you need to press and hold the Macro button to move the zoom ring into the Macro position, where zooming is disabled and the lens is locked at the 43mm focal length. Focusing is limited to the 20-50cm range in order to avoid excessive hunting in case the AF system misses the target (thankfully, this does not happen often as long as your subject has sufficient contrast). Olympus claims you can fill the frame with a subject that measures 48x36mm, but as the example below indicates, you can actually achieve a considerably higher magnification and fill the frame with something that measures only 36x27mm. This is an excellent close-up performance for a zoom lens! 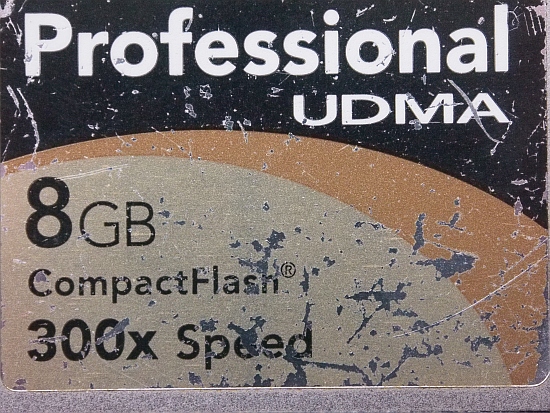 Bokeh is a word used for the out-of-focus areas of a photograph, and is usually described in qualitative terms, such as smooth / creamy / harsh etc. In the M.Zuiko Digital ED 12-50mm f/3.5-6.3 EZ, Olympus employed a five-bladed diaphragm, which isn't usually conductive to a pleasant bokeh, but in actuality the results aren't too bad - though some out-of-focus highlights can indeed look a bit weird as seen in the first example.