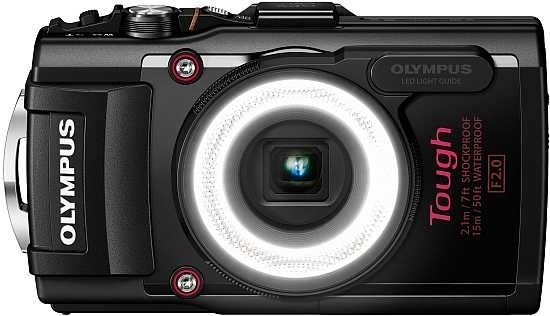 Whilst by virtue of the small-ish 1/2.3-inch sensor at its heart, the Olympus TG-4 is a snapshot camera, the pictures delivered impress none-the-less, with the regular natural colour menu option able to be boosted to a more dynamic in appearance vivid colour via the camera’s built-in menu toolbar. Inevitably perhaps there’s some visible curvature to the edges of the frame when shooting at default maximum 25mm equivalent wideangle setting, and some fall-off of detail towards the very edges of the frame if examining closely. But, whilst the regular close up/macro mode is OK for taking pictures of flowers and the ilk, the microscopic mode lets you put the lens so close you’re almost touching the subject and still get areas of the image in focus, which is useful a feature worth having. Detail is sufficient to pick up lines on the skin, so would be perfect for capturing skittish underwater critters hiding in rock crevices. At telephoto end of the zoom images are clear too, with a digital zoom option if you feel you need to get in closer still and don’t want to bother with simply cropping the image later.

In terms of low light shooting, as with pretty much any compact camera with a 1/2.3-inch sensor, ideally you do want to stray above ISO800 or ISO1600 at a push. With the Olympus TG-4 detail is noticeably breaking up/softening and colour draining at ISO3200 and above, with ISO6400 only really an option if you’re particularly desperate to achieve any shot at all, whatever the cost.

There are 7 ISO settings available on the Olympus TG-4. Here are some 100% crops which show the noise levels for each ISO setting for both JPEG and RAW.

The Olympus Tough TG-4 has a 4x optical zoom which starts at 25mm and zooms out to a modest 100mm.

Although we only used a standard sharpening amount in order to test the JPEG files, we found that, while very sharp on there own, the Olympus TG-4 does benefit from a little boost in an editing suite. However, if there's a lot of noise in the picture, this can have a tendency to exacerbate and reduce the overall quality of viewing.

The Olympus TG-4 exhibited some purple fringing effects in high-contrast situations, as shown below.

The Olympus Tough TG-4 has a Supermacro mode on its command dial which you need to switch to in order to focus down to 1cm. We found that the main issue with this mode is getting enough light between the lens and the subject. If you don't use the Supermacro mode, the closest that the TG-4 will focus to is 10cm, which isn't a useful close focusing result. However, it has to be noted that the camera can focus to 10cm even at full zoom, which is very useful for sending backgrounds out of focus.

With the flash turned off, the Olympus TG-4 doesn't show any obvious signs of vignetting at wide-angle or full zoom. However, it does occur when the flash is on. Certainly at wide-angle, at least. It's less so at full zoom, but on a plain white wall, it's still noticeable.

The Olympus TG-4 has a dedicated Night scene mode in the Scenes setting on the command dial. The advantage of using this mode is that the camera is allowed to select a longer shutter speed than when in Program mode. The latter meaning you have to select a higher ISO in order to get a balanced exposure. The camera will also assume you're resting the camera, so will choose a low ISO.