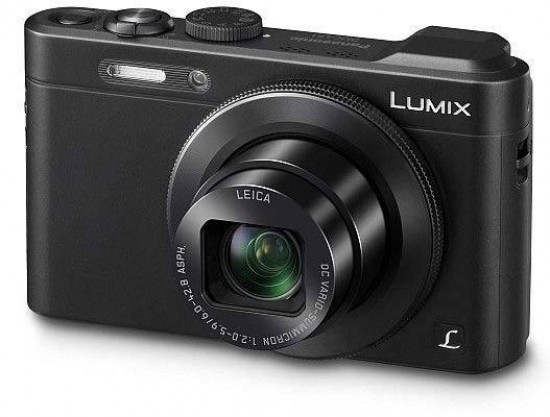 Slotting in below the flagship LX7 model, the new DMC-LF1 is a rather surprising addition to Pansonic's extensive range of compact cameras, if for nothing else than it sports an eye-level viewfinder, something of a rarity in today's market. Sharing the same 1/1.7-inch, 12 megapixel MOS sensor as the LX7, the LF1 offers a slower but longer 7x zoom lens, equivalent to a focal range of 28mm-200mm. At £379.99 / $499.95 on launch, it's essentially the same price as the now year-old LX7, but does undercut some of its immediate premium compact rivals.

Given the overall size of the camera, the integrated electronic viewfinder is understandably rather small at just 0.2-inch, making it rather tiring to use for longer periods of time. If you think of the EVF as something to use in bright sunlight when the rear screen is difficult to see, or when you want to add some extra stability to the camera when using the full extent of the 7x zoom by holding it at eye-level, then you won't be disappointed. If you're expecting to use it for 99% of your shooting, then you will be.

Still, the EVF adds relatively little bulk or weight to the overall design of the LF1, it displays quite a lot of information, including the ability to playback images and change the camera settings, and it even comes with a diopter control for glasses wearers. So in our opinion it's well worth having, if only as a backup to the main screen.

The rear LCD is more naturally used for shot composition and review. The screen itself is a bright 3-inch model with 920k dot resolution that provides a naturalistic translation of the scene before the lens. However you will still find yourself squinting and cupping a hand around it in bright sunlight, so the electronic viewfinder is worth turning to at some points.

Both Raw and JPEG files can be committed to SD/SDHC/SDXC or Eye-Fi cards, and conveniently both can be shot in tandem, with write speeds impressive at just two to three seconds. The LF1 further boasts a 7x wide optical zoom, offering a focal range equivalent to 28-200mm in 35mm terms, which is optically stabilized to help prevent image blur from camera shake. The fast f/2.0 maximum aperture at the 28mm wide-angle setting makes it easier to achieve DSLR-like shallow depth of field and out-of-focus backgrounds, also proving invaluable when hand-holding the camera in low-light, but the aperture does quickly drop-off as you start to zoom through the focal range, reaching a rather slow f/5.9 at the full 200mm telephoto setting.

The Panasonic Lumix DMC-LF1 weighs a svelte 192g even with the battery and card inserted, and it easily fits inside a trouser or coat pocket, making it truly portable. Although it lacks the more premium build quality of the LX7 with its metal body, the all-plastic LF1 still feels like a quality product, with an appealingly sober matt-black finish that doesn't draw unwanted attention to itself.

An intuitive control ring surrounds the lens which can be customised to change either the aperture, shutter speed, step zoom, exposure compensation, aspect ratio, ISO speed or white balance settings. Left at the default setting and used in conjunction with the control wheel on the rear, it makes it easy to alter the camera's principal creative controls. The Panasonic Lumix DMC-LF1 doesn't have any kind of grip on the front, just a small rubberised thumb-rest on the rear - in practice this thankfully doesn't mean that the camera is constantly slipping out of your hand.

The LF1 has the same 12 megapixel MOS sensor as the LX7, which offers low light performance running from ISO 80 to an incredible ISO 12800, which we'll come to in the Image Quality section of our write-up. The MOS sensor also greatly increases the camera's burst shooting options, with a fastest setting of 10 frames/sec for 12 full-resolution images (focus and exposure fixed at the first frame). Slower modes of 5 frames/sec and 2 frames/sec complete with AF Tracking are also available, with the High-speed Burst mode capturing 60 frames/sec at 2.5 megapixels or 40 frames/sec at 5 megapixels.

Selected via a twist of the small, ridged top-plate shooting mode dial, there's the subject recognising and performance optimising intelligent Auto (iA) mode for point and shoot simplicity, plus an extensive range of 15 Creative Control in-camera effects. Users also get access to four Color Modes via the on-screen menu when the shooting dial is turned to a creative mode, such as program, aperture priority, shutter priority or manual.

There's a choice of auto and intelligent auto ISO settings, with a range that extends from ISO 80 up to ISO 12800, all at full resolution, the sort of spec to be found on a semi-pro DSLR, so to be welcomed at a compact level. Also present and correct is the time saving 'Q.Menu' (Quick Menu) button on the backplate. Press this and a graphical toolbar of essential shooting functions appears along the bottom of the screen which the user can tab through and make selections from courtesy of the control wheel and central 'Set' button on the camera back.

It's undoubtedly these familiar elements that will appeal to anyone trading up from a cheaper, simpler Lumix compact, and soften any perceived learning curve from what otherwise outwardly appears a more sophisticated proposition. A flick of the top-mounted on/off switch and the LF1 powers up in two seconds. The LCD fades into life and the lens extends from within its protective housing to the maximum 28mm-equivalent wideangle setting. Generally the camera is as fast and responsive as one could wish for.

It's from the front and top that the Panasonic Lumix DMC-LF1 most shows its enthusiast leanings, large (for a compact) 28mm wide angle Leica-branded lens staring you in the face as you tease the camera from its packaging, with an automatic sliding lens cover to protect the glass when not in use. With the new control ring encircling the lens surround as previously mentioned, above the lens and to its left is an AF assist/self timer lamp and the built-in flash unit.

On top of the LF1 we get a small hump which houses the built-in EVF, to the right of which sit the stereo microphones. Next along is the narrow profile and firm shooting mode dial with 10 options squeezed around it. As well as iAuto we get the P,A,S,M quartet plus a separate setting for the Creative Control modes, another for the scene modes (the usual family-friendly array of portrait, landscape, baby and pet settings), the improved sweep Panorama mode, and not one but two user customisable settings.

You can't set the aperture or shutter speed when shooting movies, but the Panasonic Lumix DMC-LF1 does provide access to some of the Creative Control modes when shooting video, plus the ISO settings, white balance and AF tracking are also all accessible when shooting movies. The normal bugbear of exterior location shoots is also dealt with thanks to a wind cut option among the two screen's worth of menu settings in motion picture mode. Happily, the full extent of the smooth and steady 7x optical zoom can be accessed when shooting video, its mechanical operation quiet and minimally intrusive.

Back to stills for a moment though and, if results straight out of the camera are too naturalistic for the photographer's liking, the Creative Control modes are on hand. It's here one can choose the vibrant, saturation boosting 'Expressive' setting from an expansive range of options also including 14 other effects, with the welcome ability to alter the look of each individual effect should you so desire.

Next to the shooting mode dial is the raised shutter release button ergonomically encircled by a finger-tip rocker switch for operating the zoom. As indicated the zoom glides fairly leisurely through its range, taking just over three seconds to get from maximum wideangle to extreme telephoto. Tabbing back and forth it's possible to be reasonably accurate with your framing, and there's also a Step Zoom feature for quickly jumping to key focal lengths. Just to the right of the shutter button is the slightly recessed on/off switch.

The rear of the LF1 is well laid out, with the electronic viewfinder, diopter control and LVF button for switching between the EVF and the LCD screen positioned top-right. Alongside this is the WiFi button and indicator lamp. The built-in Wi-Fi functionaility (IEEE 802.11 b/g/n) lets you use your smartphone or mobile device to remotely change the camera settings (focus setting, exposure compensation, ISO, WB and Photo Styles) using the LUMIX App. You can even operate the 7x zoom and fire the shutter button remotely, while the auto transfer function automatically backs up your photos onto a tablet, smartphone, PC, web service, AV device or Panasonic's LUMIX Club Cloud Sync service. The DMC-LF1 is also one of the first cameras to feature NFC (Near Field Communication) technology (the same technology that's used for mobile payments), which allows you to connect the LF1 to a compatible internet enabled device or another NFC-enabled camera by simply tapping them together.

On the far-right next to the thumb-grip is the recessed 'one touch' video record button that very usefully allows the user to be up and shooting video in a thrice no matter what other (non video) mode they might have selected on the adjacent dial. Below this are the configurable Function button (we chose AE Lock) and a familiar playback button, and underneath again is the skinny but very tactile control wheel, which encircles a familiar four-way navigation pad.

This is used for tabbing through and selecting menu options, or scrolling through captured images, with a central menu/set button falling under the thumb in the middle. The top key of the quartet accesses the exposure compensation, the right key opens the flash settings options, the bottom key is for the LF1's self-timer and burst shooting options, and at nine o'clock we get access to the Focus mode settings.

Beneath this again we get the final two buttons on the camera back, the self explanatory Display - a press of which turns of the operational icons or brings up one a new range of compositional grids, including Rule of Thirds Offset, Diagonal Lines, Tunnel, Radiation 1, Radiation 2 and S-Shape - and, the Q.Menu or 'Quick Menu' button bringing up the toolbar of key shooting settings. Again, choose one of the creative shooting modes and the user has access to exposure compensation, step zoom, aspect ratio, picture size, ISO speed, white balance, AF mode and monitor luminance settings. Note that you can't customise the Quick Settings menu.

While that's it for the Panasonic Lumix DMC-LF1's backplate, the right hand side of the camera - when viewed from the back - features a terminal door covering both the HDMI (cable optional) and AV/USB out ports. There are also vacant lugs on the left and right hand flanks of the camera for attaching the provided shoulder strap. The base of the camera meanwhile features an off-centre screw thread for attaching a tripod, the other under-side feature being the compartment housing the battery, good for 250 shots from a single charge, and SD/SDHC/SDXC or Eye-Fi media cards.

So how does the Panasonic Lumix DMC-LF1 measure up as regards image quality? Read on to find out…