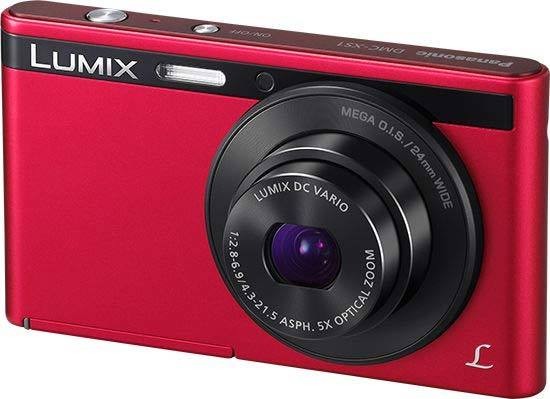 From the outside, the most noticeable thing about the Panasonic Lumix DMC-XS1 is its thinness. It's only 17.6mm deep which is very thin for the 5x optical zoom lens to fit into. This is down to some innovative Panasonic technology that has made the lens thinner. This and changing the memory card type to MicroSD has enabled the designers to squash the internal components into the World's thinnest camera.

Panasonic have tried to make the XS1 look as futuristic as possible by using clean lines and shiny buttons. The front of the camera has the main colour over the majority of the area with a black line across the top where the flash is situated, to create a two-tone effect. The lens sits in a large bezel which is largely unused and arguably just for effect. On the top, there are two buttons that operate the power and shutter release. They're simple, circular buttons that add to the futuristic dynamic that Panasonic are trying to convey with the XS1.

However, the back of the Panasonic Lumix DMC-XS1 hasn't been tampered with and has the same outlay as any other digital compact camera in this price range. Of course, they have to stop somewhere in order to save money and we understand that.

Towards the top of the camera is the zoom rocker switch with the Mode button and direct video record button sat below. The Mode button opens up a small sub-menu which allows you to choose how the camera takes pictures. The options available are Intelligent Auto, Auto, Creative control, Panoramic and Scenes. The Intelligent Auto mode is a feature that was pioneered by Panasonic and is now used on nearly every camera available under different names. It works by analysing the image in the screen and working out whether it's a landscape, portrait or macro (for example. There are usually a lot more available).  Then it changes the camera into the appropriate scene mode.

The biggest feature of the Panasonic Lumix DMC-XS1, aside from the size of the body is that the Panoramic mode can have the digital effects placed over the image either while you're shooting or as an after edit in playback. To do it when shooting, after choosing the Panoramic mode in the Mode menu, choose the direction you'd like to shoot in then decide whether you want to use a filter or not.

The zoom is relatively moderate on the XS1, so to aid in the prevention of camera shake, it has Mega OIS (Optical Image Stabiliser) fitted. Panasonic have two OIS systems; Mega and Power. The latter being more powerful than the former. Before you think that means it has a second rate image stabiliser, that's not the case at all. The Power OIS is more powerful and is used on high zoom cameras for that reason. A 5x optical zoom camera doesn't need the performance of the Power OIS when the Mega OIS can cope. It's also a less expensive system to manufacture which keeps the cost of the camera down. Fitting Power OIS to the XS1 would be overkill.

We touched on the Mode menu before and it's one of only two menus on the Panasonic Lumix DMC-XS1. Now this may appear perfectly normal, but Panasonic seem to omit the handy Q.Menu from their lower class cameras and it's a real shame. After all, it gives fast access to the important features of the camera, such as ISO, white-balance and resolution. To change these things on the XS1, you have to go into the Main menu which is found by pressing the centre button the navigation pad on the back of the camera. Pressing it opens up three options. Here you can choose to access the main shooting menu, video menu or set-up menu. As we mentioned previously, those features normally found in the Q.Menu are located in the shooting menu. You can also change other features, such as the focus modes, red-eye removal system, colour mode or image stabiliser settings if you wish.

The video only has two options in it for the record quality (classed as HD, but not FullHD) and AF options. The set-up menu is much more extensive with four pages of options. You can change modes such as the sound, date & time, video output, languages and more.

There are three continuous shooting modes on the Panasonic Lumix DMC-XS1. The top mode is a continuous drive mode and takes roughly one image every second at full size resolution. Because it constantly writes the information to the card, it's ready to shoot again three seconds later. The high speed burst mode takes a rapid 10 frames per second (fps) although it does it at a lower resolution. It can take two sets of those in a 10 second time frame.

Playback of the pictures you've already taken can't be accessed when the camera is switched off. If the camera is powered down, you need to switch it on first, which is unusual for a digital compact camera these days. The lens will be out, but will retract after around 30 seconds.

You can flick through the pictures you've taken by using the left or right of the pad on the back. Pressing up will enable the Auto/Creative retouch. Auto retouch will adjust the exposure, contrast and saturation of the picture for you. The camera allows you to preview it first.  Creative retouch lets you place a digital filter over the image which it then saves as a separate file.

In the Playback menu, you can retouch the pictures here as well. You can also resize them, protect, copy or favourite them.

In the box, you get a CD with the full operating instructions, PHOTOfunSTUDIO ver 9 and a trial version of LoiLoScope, which is a video editing suite. In paper form, you get a Basic Operating manual. It'll give instructions on how to attach the wrist strap and insert the battery – both of which are included – and the memory card (not included). There's also a charging unit for the lithium ion battery.