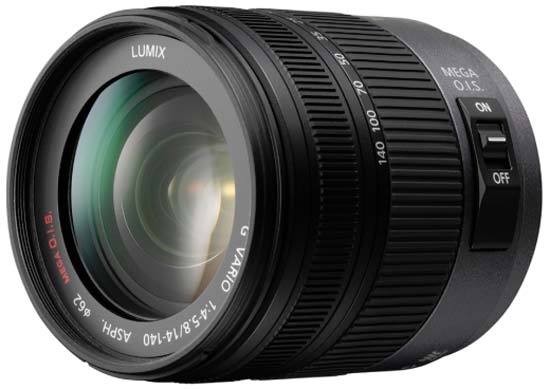 The LUMIX G VARIO HD 14-140mm F4.0-5.8 ASPH. MEGA O.I.S. is the main rival to the Olympus M.ZUIKO Digital 14-150mm f/4-5.6 ED lens that we recently reviewed, additionally offering faster auto-focus speeds with certain Micro Four Thirds bodies and b uilt-in optical image stabilisation. It is quite a lot heavier and much more expensive, though, than the Olympus equivalent, and is ideally best bought as a kit lens with the Panasonic DMC-GH1/2 cameras.

This lens is surprisingly small and lightweight for what it is, no mean feat given the vast focal range on offer, even if it does extend considerably when zoomed in. The lens is extremely fast to focus on the new DMC-GH2 camera with a response time of just 0.1 seconds, incredibly fast for a contrast-AF system. This is equally true for moving subjects too, making this lens well-suited to some sports and wildlife photography.

Optically, the lens is a good performer, much better than we expected from a 10x zoom. At most focal lengths, you can safely use it wide open or stopped down by one f-stop. Chromatic aberrations can be a bit of an issue at longer focal lengths, but they can usually be dealt with in post processing. Distortions are automatically corrected on both Olympus and Panasonic bodies. Close-up performance is better than you would think based on the published minimum focus distance figure of 50cm – in fact this lens almost doubles as a telemacro, something the Micro Four Thirds system currently lacks.

If you want the ultimate focusing speed for the Micro Four Thirds system, the Panasonic GH2 and Lumix G Vario HD 14-140mm lens is the real deal, although it does come at a price. It is heavier and more expensive than the Olympus equivalent thanks to the inclusion of MEGA O.I.S., but then the lack of image stabilisation on the Olympus lens doesn't make it well-suited to use on Panasonic bodies (unless you can live without anti-shake). Only the fact that it quickly reaches a maximum aperture of F/5.6 at 50mm detracts from an otherwise alluring all-round package. The LUMIX G VARIO HD 14-140mm F4.0-5.8 ASPH. MEGA O.I.S. is good enough to take the place of two standard lenses in your camera bag, if you can afford it...