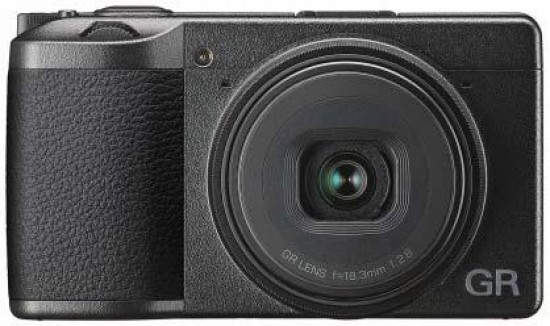 The Ricoh GR III is a new APS-C compact camera with a 24 megapixel sensor and 28mm fixed focal length lens.

We were shown a full production version of the GR III by Ricoh ahead of today's launch. We've shot a gallery of sample JPEG and RAW images with the camera in street-shooting-friendly Shoreditch, London, and spent some valuable hands-on time with the GR III.

So read on for our first impressions of using the new Ricoh GR III APS-C camera...

Ricoh's imaging division is comprised of 300 staff out of a total of nearly 100,000 in the company as a whole, giving you an idea of just how big Ricoh is globally.

This year is the 100th anniversary of the Pentax company, which became part of Ricoh back in 2011.

The Ricoh GR range was first started over 20 years ago in 1996 with the introduction of the GR1 film camera.

The new GR III is actually the 12th GR camera released, and the first new model since the popular GR II was introduced in 2013.

Tomohiro Noguchi, the Global Head of Ricoh and Pentax Product Planning, told us that "Photography begins and ends with "snap shooting"", epitomized by the Ricoh GR.

The new GR III offers three main new benefits when compared to its predecessor - higher image quality, more features and a smaller body. It's actually the same size as the GR Digital IV, which had a much smaller 1/1.7-inch sensor.

"The GR is a minimal tool" commented Noguchi. "It always remains unfinished and keeps evolving". Ricoh have committed to further improving the GR III via future firmware updates. 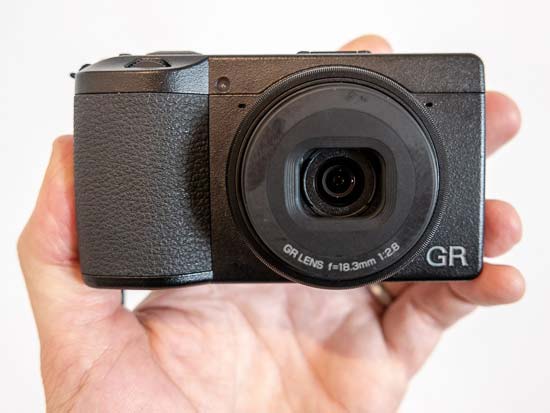 Here's a list of the key specifications for the GR III: 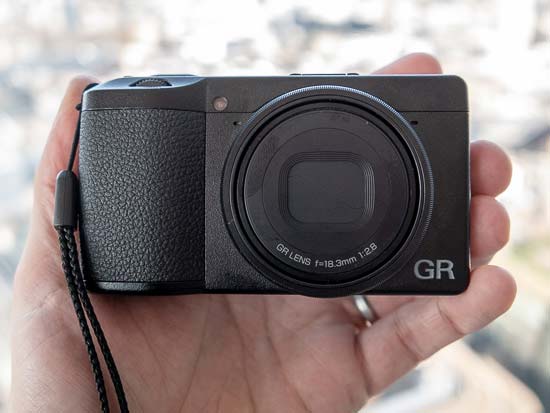 The small size and weight is one of the key attractions of the new GR III - it's one of the few cameras with such a large sensor that will fit inside a trouser or coat pocket, maintaining tone of the GR-series' key aims of being a camera that you can always carry with you.

One of the ways in which Ricoh have managed to achieve this is by simplifying the lens design, which is now comprised of 6 elements in 4 groups in order to reduce the size of the lens barrel. Consequently, the super-slim 28mm fixed focal length lens hardly protrudes at all from the front of the camera when it's powered on. 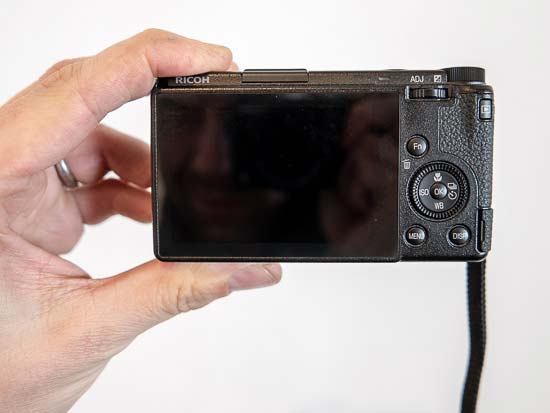 The GR III now offers a macro shooting capability with a minimum focusing distance of 6 centimeters, impressive given the size of the sensor, making it capable of capturing impressive close-up shots with lots of background blur, if so desired.

It also incorporates an ND (Neutral Density) filter to open up the aperture by two stops, useful in very bright shooting conditions where traditionally you'd need to fit a glass filter to the front of the lens.

Despite the camera's diminutive size, the GR III now features built-in image stabilisation. It may only use a simpler,3-axis system, rather than 5-axis, but the 4 stops of shutter speed compensation that it provides will definitely prove very useful on a camera that is predominantly used held out in front of you, rather than at eye level. 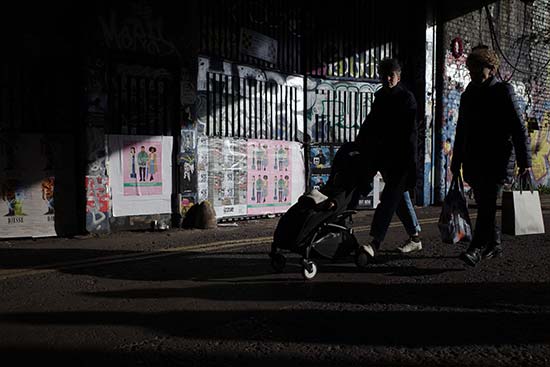 The GR III has a brand new 24.23 megapixel APS-C sensor which Ricoh claims delivers the best image quality of any GR-series camera to date. It also enables 14-bit RAW files for the first time on a GR camera (the GR II had 12-bit RAW files). 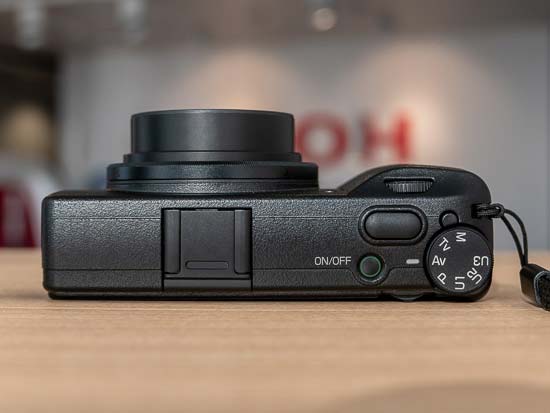 The GR III highest native ISO speed is 102,400, although looking closely at the resulting images, we wouldn't recommend using this setting unless there really is no other option. You can see the full ISO range in our sample image gallery. 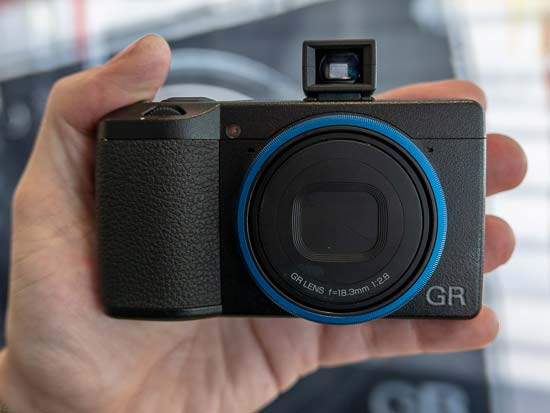 Autofocusing is one area where the GR III represents a major leap forwards for the GR series, as it now features a hybrid phase detection and contrast detection system that is claimed to improve the speed and accuracy of the autofocus.

We say claimed, because in practice the GR III is still a little on the slow side, despite the technological advances. The AF system often took took almost a second to find and lock onto the subject in single AF point mode, and even worse, sometimes it failed to lock on at all, even in lighting conditions that wouldn't trouble most other modern cameras.

Face AF worked more quickly and reliably, although there's no Eye AF as on some other recent cameras. Continuous AF is included for the first time, and it worked pretty well at tracking both slow and quicker moving subjects, although strangely you can't use the Face Detect and Continuous AF modes at the same time... 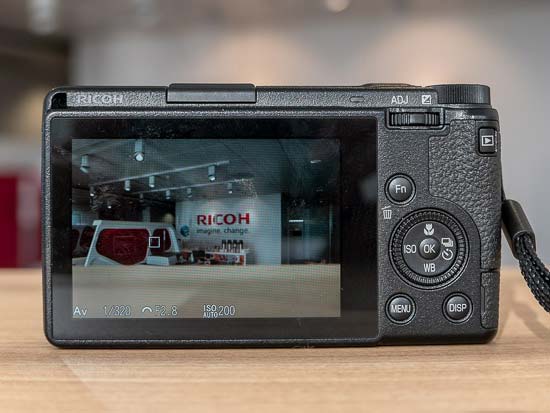 There's a 3-inch touchscreen display on the rear with 1.04-million-dot resolution, the first time that a GR camera has featured a touchscreen. It makes quite a big difference to the usability of the camera compared with earlier models, especially as it's very responsive.

As the GR III doesn't have a viewfinder (unless you buy and add the optional viewfinder that slots into the hotshoe on top of the camera), being able to move the focus point by touching the screen whilst holding the camera at arm's length is something of a revelation, for the GR series at least.

The GR III is capable of shooting 1080p video (1920x1080 pixels) at frame rates of up to 60fps. Somewhat bizarrely, the option to change between stills and movies is buried away in the Movie menu in the Main Menu system, reflecting the fact that this camera is first and foremost a stills camera (although you can customise the Fn button to include this option).

The GR III features a single UHS-II memory card slot in the same shared compartment as the battery, located on the bottom of the camera body. 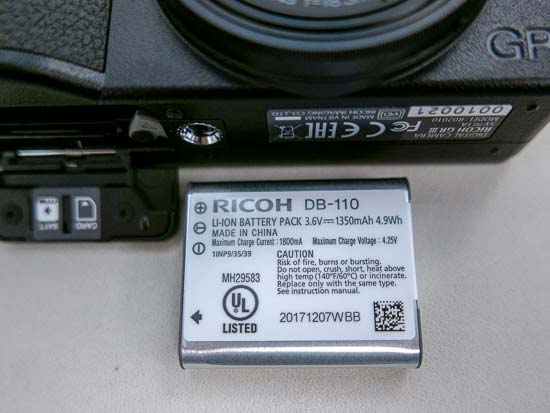 Talking of which, you'll definitely need to invest in more than one battery, as the GR III has a tiny battery with very poor life. We managed to take just 140 stills and shoot one very short movie clip before the battery was exhausted, which isn't great for a new camera in 2019.

You can at least now recharge the camera via its new USB-C port, however, as well as using the supplied charger, so charging the Ricoh GR III out in the field with an external powerbank is also a viable option if you don't want to go down the route of carrying a pocketful of batteries. 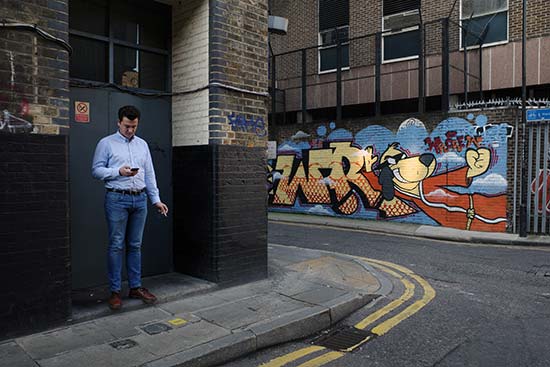 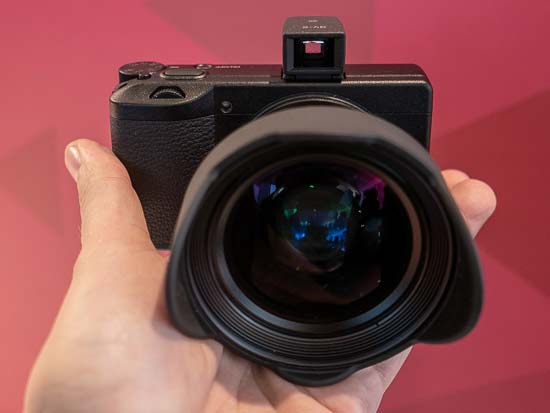 The GW-4 Wide Conversion Lens expands the GR III's angle of view to 21mm ultra-wide angle, although it instantly makes the camera much more conspicuous.

The Ricoh GR III will be available in Black from the middle of March 2019.

By way of comparison, the GR II's launch price was "just" £599 / $799, a reflection of just how much the camera market and global economy has changed in the last 6 years, especially in the UK. 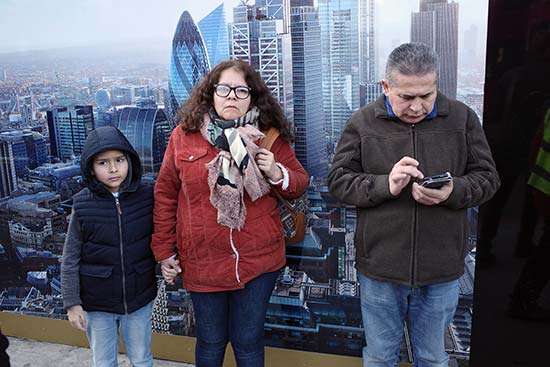 The new Ricoh GR III is the latest iteration of a well-respected camera range, adding new features and technologies to help bring the series bang up to date. We'd like to see faster autofocusing and much improved battery life, though, which both left something to be desired in our initial hands-on time with the camera. 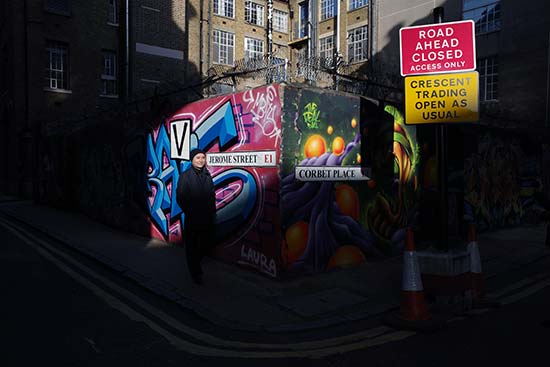 There's no denying that the GR III is capable of delivering some amazing image quality, though, as a closer look at our sample images will show, making it literally a pocket-rocket in this regard.

So what do you think? Leave a comment on the new Ricoh GR III camera below...