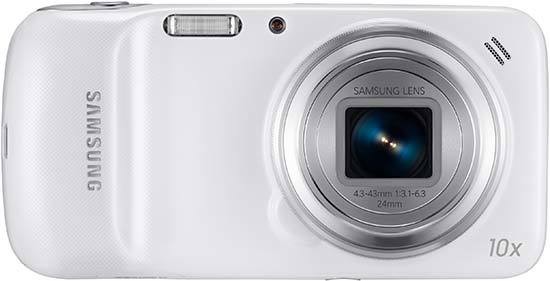 The Samsung Galaxy S4 Zoom is very much a device of two halves. From the front, it looks like just another compact camera, with a 10x zoom lens, handgrip and flash. From the rear, it looks just like a Galaxy S4 Mini smartphone, with an almost identical screen and home button, and the familiar Android OS appearing when you turn it on.

The Galaxy S4 Zoom boasts a 10x optical zoom with a focal range the 35mm equivalent of an ultra wide 24-240mm, supported by optical image stabilisation. There's also a 16.3-megapixel effective resolution from the standard sized 1/2.3-inch CMOS sensor sporting 17 total megapixels, which is physically much larger than the sensor that you find in a standard smartphone and therefore promises better image quality.

On the back is a 4.3-inch 960 x 540 (qHD) touchscreen SAMOLED display, and the S4 zoom runs the Android 4.2 Jelly Bean operating system. One crucial difference between this new devices and Samsung's previous take, the Galaxy Camera, is that the Galaxy S4 Zoom has a full suite of telephony features, whereas the Galaxy Camera only offered support for Skype or Viber through Android.

The Samsung Galaxy S4 Zoom measures 63.5 x 125.5 x 27.0mm (including protrusions), which means that it can be stored inside a trouser pocket (just), and weighs a manageable 208g without battery and card. It's undoubtedly a large device that will definitely get you noticed, especially given the attractive white finish and the large, protruding zoom and handgrip, so it's not as inconspicuous as a smartphone with a fixed lens. Having said that, the ability to zoom-in to 240mm using a relatively compact device means that you will be able to capture lots of moments that no other smartphone can reach.

With what feels like a higher proportion of metal in the build than plastic, the Galaxy S4 Zoom's sleek and stylish exterior certainly looks the part. It actually features something approaching a proper handgrip to one side of its faceplate, a feature usually jettisoned in favour of cameras that pander more to sleek styling. This thereby suggests that sharp shots towards the telephoto end of its zoom range just might be that much more achievable.

Other than the 10x lens and the handgrip, the only other features on the sparse front of the Galaxy S4 Zoom are a small porthole shaped window housing the AF assist lamp/self timer lamp and the Xenon flash unit, positioned to the left of the lens, and a pair of microphones to the right. If we've one gripe, the flash does seem to take an age to charge from cold before it can be fired. This wait might not be more than a few seconds, but it can take three squeezes of the shutter release before it will fire off a shot in flash mode.

Located on the top-plate is a thin power button. Hold this down for the first time and the Galaxy S4 Zoom stutters into life, taking almost 30 seconds to display a series of graphical screens and then extending the lens from within its body housing to maximum wideangle setting, while the rear screen switches to camera mode a couple of seconds later. The startup time from Standby is thankfully much quicker at just under 3 seconds, roughly what we'd expect from a point-and-shoot camera, although no speed demon.

A half-squeeze of the tactile shutter release button and a central highlighted AF point appears in green along with the customary confirmation 'bleep' that the user is free to go ahead and take the shot. Do so either by using the shutter release button or with a tap of the screen and in default single shot mode a full resolution, Super Fine (top) quality image is committed to either the built-in 8GB memory or an optional micro-SD card in one to two seconds, which is impressive. You can even take a picture using the power of your own voice, with "capture", "shoot", "smile" and "cheese" commands all available. Voice control can also be used to zoom the lens, fire the flash, set the timer options, and change the shooting mode, amongst other settings.

Instead of a finger-operated zoom lever, the Samsung Galaxy S4 Zoom's lens is zoomed in and out either by turning the control ring that encircles the lens, or via two on-screen icons, the former being much the quicker and easier way. The lens mechanics take a couple of seconds to propel the user from maximum wideangle to extreme telephoto. While, once again, it's not the quickest response ever, this was still sufficiently responsive to enable us to quickly frame up the shot we saw in our mind's eye. When shooting video, the zoom takes more than twice as long to move through the same range, no doubt to minimize the already fairly quiet operational buzz.

The Samsung Galaxy has an array of beginner and more advanced shooting modes. The subject recognizing Auto setting is point and shoot all the way, the camera getting it mostly right, although - typically - busier scenes can confuse the auto-focus and the shutter will still fire even if the image is noticeably soft, so you can occasionally come away with blurred results. No matter, re-compose the shot and simply try again. The Smart setting is essentially a range of 15 different clever scene modes, including the useful Macro, HDR and Panorama modes. There are also 13 creative filters available which are accessed by pressing the arrow icon at the bottom of the touchscreen, useful for previewing and adding a not-too-cliched effect.

The other available shooting modes are the familiar program mode plus the unexpected bonus of Program and Manual modes, which are grouped together in the Expert option along with the Custom mode. Aperture, shutter speed, ISO speed and exposure compensation are all cleverly set via virtual dials on the touchscreen LCD, which in reality is a lot quicker and more intuitive than it might first sound. We did miss having dedicated Aperture-priotiy and SHutter-priority modes, as offered on the Galaxy Camera.

Pressing the Home button fires up the Galaxy S4 Zoom's default screen, which displays the time and date, allows you to perform a Google Search, includes icons for the Paper Artist, Instagram, Photo Wizard, Video Editor, Camera, and Gallery apps, plus Dropbox, Play Store and a further Apps icon which accesses all 41 default apps and the Widgets screen. Having the ability to connect to a wi-fi network or cellular data if using as SIM card, then edit your images and video with either the Samsung apps, Instagram or any one of hundreds of other Android apps, and then upload them to your favourite online network quickly becomes compulsive and makes the traditional process of downloading to acomputer seem laborious and old-fashioned.

At the back of the Samsung Galaxy, in the expected absence of any optical viewfinder, stills and video are composed with the aid of the qHD SAMOLED screen. The 4.3 inch 540x960 pixel Super AMOLED display has a pixel density of 256 pixels per inch, which is identical to the display on the Galaxy S4 Mini smartphone. This sub-HD quality screen isn't as impressive as the screens on other flagship smartphones.

With the 4.3-inch screen swallowing up the entire backplate of the Samsung Galaxy S4 Zoom, apart from the Home button, there are very few other physical controls. There's a port for AV/USB output on the right-hand side, with a tiny hoop for attaching a wriststrap just below, alongside the micro-SD card slot. Further long is a metal screw thread for a tripod, denoting that the S4 Zoom is very much a camera as well as a phone. Completing the exterior controls are a headphone port and a volume control button. Note that the battery can't be removed, so charging is most definitely done in-camera.