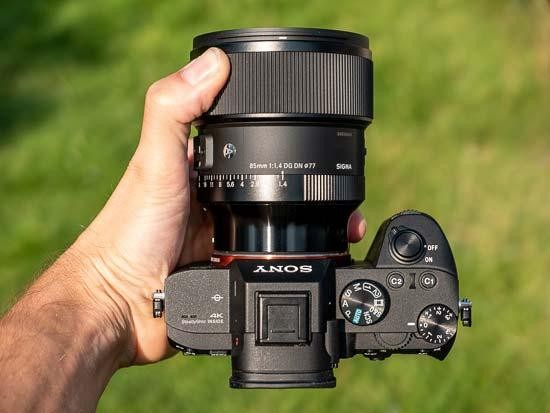 It has been completely reimagined from the ground-up for Sony E-Mount and L-Mount (Sigma, Leica and Panasonic) mirrorless cameras to be much smaller and lighter than the original version, hence being assigned the company's 'DN' (Digital Native) acronymn.

This has principally been achieved by implementing a new stepping AF motor and using in-camera correction to correct for vignetting and distortion.

It can also be used with APS-C models where it provides a 127.5mm equivalent focal length.

It's fully compatible with Sony’s Continuous AF (AF-C) and high-speed autofocus modes, plus the camera's in-body image stabilisation, if it's available.

This short telephoto prime lens is comprised of 15 elements in 11 groups including five Special Low Dispersion (SLD) elements and one aspherical element to help to control optical aberrations including chromatic aberration, flare and ghosting.

It features a rounded 11 blade diaphragm which creates a very attractive blur to the out of focus areas of the image.

It has a new stepping motor for smooth, quiet and accurate autofocusing, Super Multi-Layer Coating to reduce flare and ghosting, a minimum focusing distance of 85cm / 33.5in and a maximum reproduction ratio of 1:8.4.

Other new features include a traditional aperture ring that's complemented by both a Lock button and a De-click button. There's also a new customizable AFL button, as per many of Sigma's other lenses.

Weighing in at 625grams and measuring 9.6cm in length, the Sigma 85mm F1.4 DG DN Art for Sony E-Mount lens is significantly smaller than the original version - exactly half the weight and 5.4cms shorter, which represents a massive reduction in volume.

It's a pretty incredible achievement that makes this new version much more equal to the other 85mm lenses that are available for Sony's mirrorless system in size and weight.

As seen in the product photos, it now complements a full-frame mirrorless camera like the Sony A7 III that we tested it with very well, being small and light enough to use all day if required.

As with Sigma's previous Art lenses for DSLR cameras, build quality is once again excellent.

The lens has a plastic shell with a mixture of metallic parts and a compound material, TSC (Thermally Stable Composite), used inside, and now utilises a dust- and splash- proof construction.

It also incorporates a brass bayonet mount that's supposedly more durable. The optical elements are made of high-grade glass.

In terms of features, the Sigma 85mm F1.4 DG DN Art for Sony E-Mount offers almost everything that you need from a prime lens.

The main exception is the lack of built-in Vibration Reduction, depending instead on the in-camera stabilisation offered by most Sony Alpha bodies. The very fast maximum aperture of f/1.4 also helps to make up for this missing feature.

Also, unlike the original version, there's no longer a distance scale to show the closest focusing distance of 0.85m / 2.79ft to infinity.

The Sigma 85mm F1.4 DG DN Art for Sony E-Mount lens now has a traditional aperture ring on the lens barrel, which allows you to set the aperture in 1/3 steps, complete with full aperture markings. The aperture is also shown in the viewfinder or on the LCD screen as you change it via the ring.

The aperture ring is nicely damped and makes a distinctive click as you change the setting, and it also has quite a stiff action, making it less easily moved when stored in a pocket or bag.

Focusing is usefully internal and manual focusing is possible when set via the Focus switch on the lens barrel.

There are no hard stops at both ends of the range, though, making it more difficult to set focus at infinity.

Polariser users should be pleased that the 77mm filter thread doesn't rotate on focus.

There is a dedicated Auto Focus Lock (AFL) button that can also be re-configured to assign various functions to the lens barrel.

When it comes to auto-focusing, the Sigma 85mm F1.4 DG DN Art for Sony E-Mount zoom is a quick performer, taking about 0.15 seconds to lock onto the subject when mounted on the Sony A7 III that we tested it with. It's definitely a lot quicker to focus than the original version.

We didn't experience very much "hunting" at all, either in good or bad light, with the lens accurately focusing almost all of the time.

It's also a very quiet performer, thanks to the built-in HSM (Hyper Sonic Motor), which makes this lens well-suited to video recording.

Backing this up is the brand new Click switch, which as its name suggests can be used to de-click the aperture ring mechanism when shooting video, or turn it on for stills.

The Sigma 85mm F1.4 DG DN Art for Sony E-Mount ships with a good quality soft case and strap and also a large plastic petal-shaped lens hood (LH828-02) that can now be locked into place.

It accepts 77mm filters, which is smaller than the 86mm filter size of the original version and therefore more economical.

Chromatic aberrations, typically seen as purple or blue fringes along contrasty edges, are only conspicuous by their almost complete absence from our Sigma 85mm F1.4 DG DN Art for Sony E-Mount test shots.

With the Sigma 85mm F1.4 DG DN Art for Sony E-Mount lens set to its maximum aperture of f/1.4, there is significant light fall-off in the corners. Stopping-down to f/4 virtually eliminates this.

The Sigma 85mm F1.4 DG DN Art for Sony E-Mount is capable of producing quite nice sunstars when stopped-down to f/16 or f/22, as shown below, although flare does occur when shooting directly into the sun.

In the 85mm F1.4 DG DN Art for Sony E-Mount lens, Sigma employed an iris diaphragm with 11 rounded blades, which has resulted in very nice bokeh in our view.

In order to show you how sharp the Sigma 85mm F1.4 DG DN Art lens is, we are providing 100% crops on the following page.