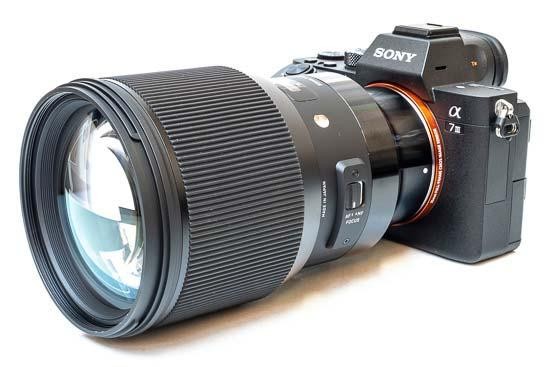 The Sigma 85mm F1.4 DG HSM for Sony E-mount cameras brings Sigma's much-lauded Art series lenses to Sony's popular mirrrorless system for the first time. It once again offers superlative image and build quality at an attractive price point, but it is even bigger and heavier than the DSLR version of the lens that it's based upon, and therefore than all the other Sony 85mm lens options (with the exception of an adapted Zeiss Otus 85mm).

It also continues to suffer from the same lack of weather-sealing and image stabilisation that the DSLR version suffered from, although at least the latter is addressed if you're using this lens with one of the latest generation Sony cameras that offer in-body stabilisation, such as the new A7 III that we tested it with.

The Sigma 85mm F1.4 DG HSM for Sony E-Mount is a very fast and tack-sharp lens, both in the centre and at the edges of the frame, with little evidence of chromatic aberrations and virtually no distortion. Vignetting at wide-open apertures is the only real optical issue of note, something that other fast lenses also suffer from, and stopping down to f/4 solves this problem altogether.

As with other Sigma Art lenses, the build quality is fantastic, with the brass lens mount and sober all-black design adding to the high-quality feel, and Sigma have also included a very good petal-shaped lens hood and padded case with strap. As noted above, though, it is a massive lens given the modest 85mm focal length.

Auto-focusing was fairly quick and quiet on the Sony A7 III that we tested the lens with, and manual focus over-ride at any time via the Sony DMF auto-focus mode is a great feature, with large and well-damped focusing ring proving a pleasure to use. We also compared it to using the DSLR version of the same lens with an adapter (both Sigma and Metabones) on the A7 III, and this new native version is noticeably quicker and more reliable when using Sony’s Continuous AF (AF-C) mode.

Sigma have wisely priced the Sony version of this lens at exactly the same price as the DSLR version, which in turn makes it quite a bit cheaper than its main rival, the Sony FE 85mm F1.4 GM. That lens is significantly smaller and lighter, though, so with both lenses offering outstanding image quality, choosing between them will probably come down to cost versus size. Alternatively, there's the slower but much, much cheaper and smaller Sony FE 85mm F1.8 lens, which almost matches the Sigma 85mm and Sony 85mm f/1.4 in terms of image quality.

So, in summary, the Sigma 85mm F1.4 DG HSM is a great addition to the Sony full-frame family, offering another high-quality 85mm lens option to the range. It is a very large and heavy 85mm lens by mirrorless standards, though, and certainly isn't going to appeal to those who believe that a mirrorless system should be small and light.