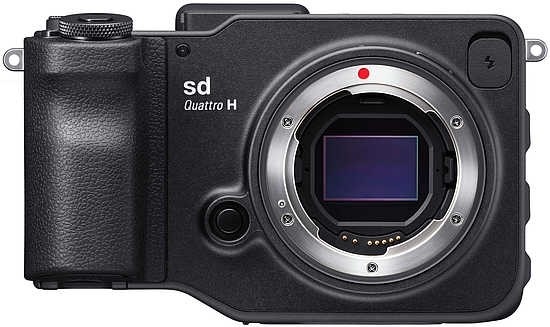 The Sigma sd Quattro has a very unusual design that's quite unlike any other compact system camera that we've seen before. Measuring 147mm (W) x 95.1mm (H) x 90.8mm (D) and weighing 625grams, it's wide and heavy, with a very pronounced hand-grip with a leatherette covering which helps you to keep a firm hold and accomodates a wide range of hand sizes. There's also a generous thunb-grip at the rear of the camera.

Utilising a magnesium alloy body, the Sigma sd Quattro is an exceedingly well built camera, certainly up there with the best that the other manufacturers have to offer. A series of O-rings and environmental seals around the camera's buttons and seams prevent the intrusion of dust and water, making the sd Quattro suitable for use in adverse weather conditions, and the lens mount features a dust protector sealed with optical glass to prevent dust from entering the camera body. The sd Quattro has an under-stated, all-black appearance with a subtly textured surface, and together with the heavier weight this lends the camera a professional look and feel. The all-metal tripod mount directly inline with the centre of the lens is a giveaway sign that this is intended to be a serious camera.

At the heart of the Sigma sd Quattro is an APS-C sized Foveon image sensor. The exact size of the image sensor used in the sd Quattro camera is 23.4×15.5mm. Sigma are still the only manufacturer to use the Foveon X3 sensor, quoting the resolution of the DP Quattro as 39 megapixels. The Foveon solution uses 3 layers of stacked on top of each other, with each photodiode capturing all of the RGB data. The Quattro sensor allocates 20 megapixels to the top layer which records both blue colour and luminance information, and 4.9 megapixels to the other two layers which record green and then red colour information respectively. Sigma say that this important change offers an an increase in resolution compared to the previous Foveon sensor, along with faster processing times and less noise, at least in the red and green channels.

Sigma and Foveon continue to claim that this 3-layer approach results in better looking colour images straight out of the camera when compared to a more conventional CCD/CMOS sensor. Whilst this may be true, from the user's point of view the final image is 5,440x3,616 pixels in size, which limits how big you can print or crop the native image without interpolating it in Adobe Photoshop or another application.

The sd Quattro uses SIGMA SA mount, instantly making it compatible with all of the SIGMA GLOBAL VISION lenses in the Contemporary, Art and Sports lines. Our review sample came with the Sigma 30mm f/1.4 DC HSM Art lens, which felt well-balanced on the sd Quattro and provides a 45mm effective focal range and a very fast f/1.4 maximum aperture.

The 3 inch LCD screen on the rear displays 100% of the image and the 1,620K pixel resolution is very good, plus there are a couple of options for increasing or decreasing the brightness of the screen if you don't like the default setting. Rather strangely the sd Quattro's screen looks bigger than it really is at first glance, until you realise that there's a smaller second screen to the right of the 3-inch LCD, with 5 small buttons to the right again. In order, these access the backlight, exposure compensation, IOS speed, metering mode and shooting mode, with the current option for each one shown on the small screen.

The Sigma sd Quattro has a high-resolution 2.36 megapixel electronic viewfinder, which offers near-100% coverage and a 1.09 magnification ratio. There's a dedicated switch next to the viewfinder which toggles between displaying the image in the viewfinder, the monitor, or the Auto mode, where the camera automatically switches to the viewfinder display when the user is looking through it and to the monitor when they're not.

Just like a DSLR, the Sigma sd Quattro offers both JPEG and RAW recording formats. There are 3 different JPEG compression levels (Fine, Normal, Basic), three resolution settings (Super-high, High Low) and a choice of five crop modes (21:9, 16:9, 3:2, 4:3 and 1:1). The RAW files are saved in the Sigma X3F format, which currently can only be processed using the free to download Sigma Photo Pro RAW 6 image developer (not supplied in the box). Sigma Photo Pro is a simple, straight-forward but rather slow application that doesn't compare that well with Lightroom or Photoshop in terms of features, but gets the job done and is free of charge. We really wish that Sigma would support the Adobe DNG format so that we could use our favourite processing software from day one. Note that if you shoot in the RAW mode, you can't also choose the Super-High resolution in-camera, although you can develop the RAW file into a Super-High file using Sigma Photo Pro in post-processing.

The start-up time from turning the Sigma sd Quattro on to being ready to take a photo is OK at around 1.5 seconds. It takes around 10 seconds to store RAW files, although thankfully you can take another shot almost straight-away. The sd Quattro has a respectable enough burst mode of 3.6fps should you feel the need, being able to capture 14 RAW/High files before the camera locks-up completely for a few seconds.

The Sigma sd Quattro offers a full range of advanced exposure controls via the Mode button on the rear of the camera, including aperture-priority, shutter-priority, manual and manual focusing, with three Custom modes so that you can save and recall your preferred settings. There are no auto-everything or scene modes on this camera, which is a veritable breath of fresh air at a time when most manufacturers are stuffing their cameras full of clever technologies that take control away from the user. The aperture or shutter speed are set by using the forefinger-operated control dial on top of the camera which encircles the shutter button, with a smaller rear control dial setting the aperture in the Manual shooting mode and exposure compensation in the other modes.

The sd Quattro has three metering modes, Evaluative Metering, Center Weighted Average Metering and Spot Metering. Exposure compensation can be set in 1/3 stop increments from +3.0 to -3.0 stops and a simple auto bracketing function is also available.

Auto-focusing remains one of the weaker points of the sd Quattro. There are 9 focusing points to choose from and three point sizes, but you can only select one at a time, with no multi-AF point system that virtually all other cameras have. Yhe Free Movement AF mode allows the user to precisely select the focus frame from a slightly larger area, while the Face Detection AF mode detects human faces and prioritizes focusing on them. There's a dedicated button below the navigation pad for choosing the focus point, but it's still easier and quicker to set the focus to the middle point, then focus by half-pressing the shutter button and recompose the frame for off-centre subjects.

Despite using a system that combines Phase detection AF and Contrast detection AF, the sd Quattro's autofocus system still isn't exactly what you'd call snappy, especially in low-light. It usually locks onto the subject eventually, but there's a noticeable 0.5 second delay that doesn't make this camera particularly good for action photography. Note that the sd Quattro does now have a built-in focus assist lamp

Manual Focus is also available, which obviously avoids the auto-focus lag and speeds up the camera. It is possible to magnify the LCD display by 8x to check the focusing by pressing the OK button, although this doesn't provide enough magnification or clarity to ensure precise focus. Focus peaking puts a coloured outline (white, black, red, or yellow) around the subject in the viewfinder for instant confirmation of the person or object currently in focus.

The Sigma sd Quattro doesn't have a built-in pop-flash unit, just an optional flashgun which fits in the external hotshoe directly above the lens. Sigma suggest that you use the optional EF-140S external flashgun with the sd Quattro. Also on top of the camera body is the unusual Lock switch which prevents any accidental pressing of buttons. The buttons that are locked with this switch may be customized by the user.

It's fair to say that movies aren't exactly the Sigma sd Quattro's strong point, in that Sigma have completely ommitted video recording. The battery life is also poor, with a CIPA quoted life of 200 shots - we managed 180 images before needing to recharge. Sigma have decided to only supply one battery in the box, so you'll need to budget for a few spares to get through a days shooting.

The main menu system on the Sigma sd Quattro, accessed by pressing the Menu button above the navigation pad, is rather rudimentary but simple to use. There are three tabs along the top, Camera, Play and Settings, subdivided into 6, 2 and 5 screens of options respectively. Due to the large LCD screen and restricting the number of on-screen choices to 5, the various options and icons are quite clear and legible, and each option uses a combination of text and helpful small icon.

The more intuitive Quick Set menu is accessed via the QS button on top of the camera, as the name suggests providing quicker access to eight key features - ISO, Metering, Burst Mode, White Balance, Image Size, Image Resolution, Crop Mode and Colour Mode. The navigation pad keys and rear control dial are then used to select the various options for each feature.

Once you have captured a photo, the Sigma sd Quattro has a rather limited range of options when it comes to playing, reviewing and managing your images. You can instantly scroll through the images that you have taken, view thumbnails (9 onscreen at once), zoom in and out up to 10x magnification, view slideshows with various configurable options, set the print order, record a soundclip, lock, mark, and rotate an image.

The Display button toggles detailed settings information about each picture on and off, such as the ISO rating and aperture / shutter speed, and there is a small histogram available during playback and also when taking a picture. You can also turn on the useful Exposure Warning which shows a flashing red area for any overexposed parts of a recorded image. When taking a photo, pressing the Display button toggles between the detailed information, the small histogram with an electronic level, a status screen with no live preview, and turning the LCD screen off.