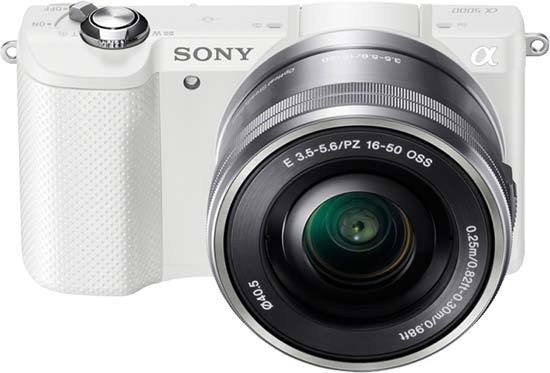 The new Sony A5000 is virtually identical to its predecessor, the NEX-3N, the main design changes being a bigger handgrip and the relocation of the Playback button to the rear of the camera, while internally the main menu system has been completely revamped. Given the recent release of the Panasonic Lumix GM1, Sony are now marketing the A5000 as the smallest interchangeable lens camera with wi-fi in the world, weighing a mere 210g and measuring 109.6 x 62.8 x 35.7mm - and they've still retained the NEX-3N's built-in pop-up flash and 180-dgree tilting LCD screen.

Despite weighing so little (admittedly without the lens and battery fitted), the A5000 still feels solid gripped in the palm, though with a lens attached it's too large for most jacket pockets. It now has a taller, bigger grip than the NEX-3N with a subtle indentation near the top, which slightly improves your grip on the camera. With the supplied 16-50mm power zoom kit lens attached the Sony A5000 doesn't look or feel too top heavy, as the lens retracts back into itself when not in use, making for a very compact overall package.

The 3 inch LCD screen can be tilted back and forward through a full 180° - if not, unfortunately swung outwards at 90° - to allow for low and high angle compositions we might not have attempted without. You can even fully turn it to the front, proving very useful for those ubiquitous selfies, although you can't close it inwards against the camera body to help protect it.

The A5000 offers the High Definition video shooting of the rest of the NEX series, full HD AVCHD (60i/50i/25p/24p) with stereo sound to be precise, which will be more than adequate for the A5000's target audience. It also features a useful dedicated red camcorder-style video record button for instant thumb-operated video access on the rear.

Low light sensitivity without flash also theoretically looks set to show rivals a thing or two by ranging from ISO 100 to a maximum ISO 16000 equivalent setting. Impressive stuff, and matching the sort of spec we're used to seeing on mid-range DSLRs. There's no in-body image stabilisation offered by the A5000 unfortunately, so this is via the lens only. It appears to work well, at least as effectively as the in-camera or lens based anti-shake methodology deployed by rival brands.

The A5000's design is pleasingly pared-back, particularly when viewed from the front. Sony branding and black plastic DSLR-style lens release button aside, all we find on the faceplate is a small porthole-shaped window for the AF assist/self timer lamp, and the revised handgrip with a dimpled surface for a firmer hold. Oh, and the "APS-C" moniker just in case you want to brag about the size of your sensor to your Micro Four Thirds friends.

The top plate looks similarly functional rather than fashionable. The A5000 is turned on or off via a flick of a chunky, nicely rigid switch to the far right, rather than via the recessed button that we usually find on cameras with a small form factor. Do this and it's a wait of 1-2 seconds before an image materializes on the LCD allowing the first shot to be framed - slightly slower than we expected in this regard, and no match for a DSLR proper.

One feature on the A5000 that's designed to make it more accessible to upgraders is a power zoom switch, very similar to that found on many compact cameras. This allows the 16-50mm kit lens to be zoomed in three different ways; using the zoom lever on top of the camera, which is good for one-handed operation, via the zoom ring on the lens, and finally using the zoom control on the side of the lens. If you don't have a power zoom lens attached, the the zoom lever less adjusts the digital zoom instead (it that's enabled), and it can also be used to zoom during image playback regardless of the lens that's fitted.

Underneath the On/Off switch is the thumb-operated dedicated movie record button. Press this and the user is instantly recording video, whatever alternative shooting mode might previously have been in use. Like the same control found on the Panasonic G-series and Olympus PEN cameras, this proves essential with regard to spur of the moment filming.

Also positioned atop the camera is the integrated pop-up flash, positioned inline with the centre of the lens, which borrows a lot of design cues from the flagship NEX-7 model. Note that the A5000 doesn't offer an accessory port for attaching optional accessories like the FDA-EV1S electronic viewfinder or the ECM-SST1 microphone, unlike the more expensive NEX/Alpha models. Two small holes either side of the flash for the stereo sound complete the camera's top-plate.

Press the shutter release button down halfway and, after a blink-and-you'll-miss-it moment of focus/exposure adjustment, the AF point/s highlight in green accompanied by a beep of affirmation to indicate that the user is good to continue on and take the shot. Do so, and in single shot mode to the sound of a satisfying shutter click, a full resolution JPEG is written to memory in about 2 seconds. There is the option to also shoot Raw files, or even more usefully for those who wish to hedge their bets Raw and JPEG images in tandem. You also get Fine or Normal compression levels offered for JPEGs.

Press the Menu button on the rear six icons appear on screen - Camera Settings, Custom Settings, Wireless, Applications, Playback and Setup. Choosing one of these opens a text-based menu system with with white text on a black background aiding visibility. The six Camera Settings folders allow users to select image size, ratio and quality and - if JPEG (RAW and RAW+JPEG also available) - compression rates too, plus features like long exposure and high ISO noise reduction - all in fact activated as a default, and also contains the video quality and audio options, while the four Custom Settings folders allow you to tweak the A5000 to your way of working.

Just like Olympus and Panasonic, the Sony A5000 offers a range of creative Picture Effects, including posterisation, partial colour, retro, high-key, mono and toy camera. These effects can also be applied when using the Intelligent Auto shooting mode. The Soft Skin mode automatically retouches portraits, removing any minor blemishes and wrinkles for a more conventionally good-looking appearance.

The various shooting modes are rather inconveniently buried away as the first option in the Camera Settings menu, including standard P,A,S,M, 9-strong scene mode, intelligent auto and Sweep Panorama modes. Even in Intelligent Auto mode users still have the ability to get hands on to a degree thanks to the Photo Creativity mode. This provides easy-to-understand control over a number of key parameters via a series of interactive on-screen sliders, with the real-time preview on the LCD providing instant feedback to the beginner target audience.

In addition to controlling the background defocus, with a half moon shaped indicator appealing on-screen to the side of the scroll wheel, defocus at the bottom of the arc, 'crisp' at the top, you can also change the vividness, brightness and colour of the image, plus add a Picture Effect or the Soft Skin Effect, and set the self-timer and burst shooting options. You can even apply more than one option at a time and go back and individually change them if you wish.

The A5000's external backplate is once again a sparse affair, the majority of it taken up by the 3-inch widescreen ratio angle-adjustable LCD that stretches from base to top plate. To the right of this are the main controls, with the aforementioned Menu button at the top. Underneath is a scroll wheel, used to move through the various menu options and make selections, which has its own central, unmarked set button. Th scroll wheel is quite responsive to the touch, which, on a positive note, means that tabbing through options is a swift process, but on the other hand it's easy to slip past the setting you actually wanted when hurrying through them as a photo opportunity suddenly presents itself.

Set at the four points around this scroll wheel/pad are a means of adjusting the Display (top), ISO Speed (right) the Exposure Compensation / Picture Effects (bottom) and the Self-timer/Drive mode options. Note that all of the buttons around the navigation wheel and the center button too can optionally be assigned to a custom function of your choice.

Sitting alongside the self-explanatory dedicated playback/review button, the last button on the camera back provides a means of activating the Help function, which Sony no doubt hopes to provide a crutch for new users trading up from a bog-standard point and shoot compact. Examples of textual advice, complete with small pictorial thumbnail alongside, include 'increase the ISO sensitivity to make the shutter speed faster', and then, the thoughtful addition: 'higher ISO sensitivity may make noise stand out.' Hand holding for those who want it then, while more experienced users can reconfigure the button to something more useful.

As denoted by symbols on the side of the camera, the Sony A5000 is wi-fi and NFC capable and the functions can be adjusted in the Wireless main menu. You can choose to transmit the images to either a smartphone computer, or a compatible TV set. One cool feature of the wi-fi is being able to link the camera to your smart phone using the PlayMemories Mobile app. You can then use the phone as a remote so those outstretched arm 'selfies' will be a thing of the past. The A5000 also features NFC (Near Field Communication) technology (the same technology that's used for mobile payments), which allows you to connect it to a compatible internet enabled device or another NFC-enabled camera by simply tapping them together. You can also use the WPS Push option to locate a hot spot, access settings, edit the device name, display the MAC address or format all settings if you wish.

In addition to the built-in wi-fi/nfc connectivity, the A5000 supports PlayMemories Camera Apps. As the name suggests, this is a downloadable service that lets you add new functionality to the camera, either via wi-fi or USB connection. Smart Remote Control, which allows you to control the exposure and shutter release via your smartphone, is preinstalled on the A5000. Other optional apps available include Picture Effect+, Bracket Pro, Multi Frame NR, Photo Retouchand Direct Upload, and Sony plans to provide more new apps in the near future. Note that only some of the apps are free.

At the base of the A5000 we find a metal screw thread for a tripod directly beneath the lens mount, and a compartment storing the rechargeable battery. The memory card slot is located on the left-hand side of the camera when viewed from the rear, here Sony reaching out to a wider audience by offering SD/SDHC/SDXC compatibility alongside its own Memory Stick. The left hand flank is also where users will find a covered port for HDMI connectivity and Sony's Multi port. Only the USB cable was provided with our review sample; there's no standard definition AV output. There's also a small built-in speaker for reviewing audio in the field on the bottom and protruding metal strap eyelets on either side of the camera.