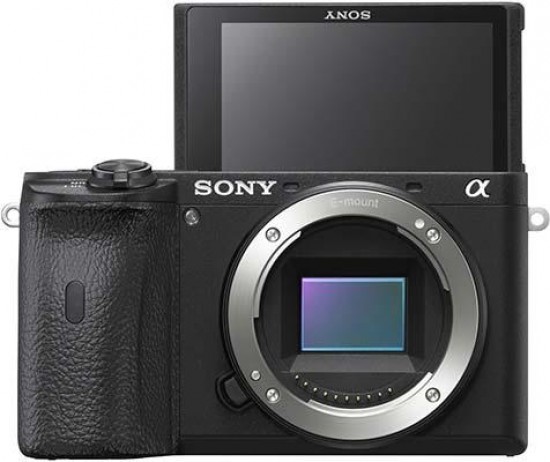 The Sony A6600 is a new flagship mirrorless camera with an APS-C image sensor that replaces the A6500 at the top of the pecking order.

At its core is a 24.2 megapixel Exmor CMOS image sensor, the latest BIONZ X image processor, and a front-end LSI inherited from Sony’s more expensive range of full-frame mirrorless cameras.

The A6600 can record 4K HDR (HLG) 3840x2160 video at 30fps, along with Full HD 1080p footage up to 120fps, both without any limits on the recording length. There's also a new integrated microphone input for clearer and crisper audio and also an integrated headphone jack for accurate monitoring of recorded sound.

Externally the new Sony A6600 is extremely similar to the recent A6400 camera, so much so that you'd be hard-pressed to tell them apart side-by-side.

Once again, Sony haven't really deviated very much from the design of the original Alpha A6000 model that was released way back in 2014.

As with that model, the Sony A6600 employs a tough magnesium alloy body shell that incorporates full weather sealing for extra peace of mind in inclement conditions.

The Alpha A6600 also has a deeper, more sculpted hand-grip that is relatively wide and comfortable to hold on to, which combined with the rear thumb rest makes the camera feel secure enough when shooting either one- or two-handed.

The A6600 is Sony's latest camera to feature optical 5-axis image stabilization. The A6600 offers 5-stops of compensation, with the in-body system ensuring that the camera can stabilize all kinds of lenses, including E-mount lenses without Optical SteadyShot (OSS) and A-mount lenses as well.

Note that third party lenses without any electronic contacts only benefit from three axes of compensation, and you need to input which focal length you’re using via the menu system.

The A6600 shares the same 2.36 million dot OLED electronic viewfinder as used by the A6400, which features a 120fps high frame rate setting to help track moving subjects more smoothly with virtually no lag.

Whilst this 3-year-old viewfinder is perfectly respectable, we'd have expected to see a higher-spec model used on the new flagship A6600.

The same is also true of the 3-inch widescreen LCD monitor, which again rather disappointingly retains the same 922k resolution of the A6400's screen and the same 180-degree flippable design - a higher resolution screen would have made the A6600 more competitive with its main rivals.

The flip-up screen is is very versatile for selfies and vlogging, although if you fit an accessory to the camera's flash hotshoe (like an external mic), you won't actually be able to use the screen in this position.

Sony have also implemented touch sensitivity on the LCD screen. This makes functions like focus point selection much easier and more intuitive, especially given the continued lack of a dedicated AF joystick, and it even works while looking through the electronic viewfinder.

Unfortunately and somewhat bizarrely, though, you can't use the touchscreen to navigate the main menu or quick menu settings or even swipe through your images in playback mode, all rather stange limitations that are also shared by other Alpha cameras.

The Sony A6600’s primary external controls are virtually identical to those on the A6400.

There's the same dual wheel layout with a thumb-operated control dial on the rear of the top panel and a secondary rear-panel scroll wheel that doubles as the 4-way navigation buttons.

The auto-exposure lock button is located directly alongside the thumb rest within a lever switch that gives the button two functions.

Set the switch to AEL and you can meter light and lock exposure independently of the shutter release. With the switch set to AF/MF, the exposure lock button instead activates manual focus during autofocusing, or switches the focus mode to auto when in manual mode.

The A6600 has an auto-focusing system with 425 phase-detection AF points and 425 contrast-detection AF points, spread over almost the entirety of the sensor area (84% to be precise). This helps the camera achieve a quoted focusing time of just 0.02 seconds, compared to the 0.05 second time of the A6500 model.

Another focusing feature that has been improved is Eye AF, which uses the most recent algorithm that uses AI-based object recognition to detect and track the subject, improving the accuracy, speed, and performance of the continuous AF system.

You simply select the the Tracking AF mode, position the AF point over the subject that you want to track, half-press the shutter, and the camera will doggedly follow that subject wherever it moves in the frame. It doesn't have to be a person - the A6600 will track virtually any subject that you care to point it at.

It’s not just continuous auto-focusing that gets a boost though, as continuous shooting is also enhanced.

On paper the A6600 seems to be no faster than the A6500, with both cameras capable of shooting at 11fps using the mechanical shutter with continuous AF/AE metering and almost no perceptible lag on the LCD or EVF.

What has been improved is the burst rate when using the electronic shutter, up from a rather pedestrian 3fps on the A6500 to a much more impressive 8fps on the A6600.

The Sony A6600 is an even more customisable camera than the recent A6400.

The rear Fn function button displays a quick-access menu of frequently used shooting settings, and you can choose which items appear on this menu.

There are also four Custom buttons which can each be assigned a frequently used function for direct access.

Even the AF/MF/AEL button can be customised, along with the left, right, down and centre rear panel navigation buttons, as well as the Fn button’s role in playback mode.

Along with integrated wi-fi, a low-power, low-bandwidth Bluetooth 4.1 data connection is now also available on the A6600.

This lets you connect your camera to a smart device even when the A6600 is turned off for easier transfer of images. The Bluetooth connection can also be used to sync GPS location data from your smartphone.

In terms of the available shooting modes, there are two Memory modes marked 1 and 2 on the shooting mode dial. These allow you to store two frequently used shooting set-ups for quick access, and within each Memory mode is a further four customisable sub-mode pre-sets which can be saved in-camera.

There are also the usual auto, semi auto and manual modes, plus a Scene Selection position and a Movie mode that works in conjunction with the video record button located on the right edge of the thumb grip.

Also featured on the A6600 is the Slow and Quick (S&Q) mode, which as the name suggests gives you easier access to the camera's slow- and quick- motion video options (frame rates from 1fps to 120fps), as selected in the Movie1 tab / S&Q Settings option in the main menu system.

Note that when shooting in 4K at 24 and 25p, the camera utilises the full width of the image sensor to oversample from 6K's worth of data, but at 30p, a mild crop is still applied.

The A6600 also features Sony’s S-Log 2 and 3 gamma curves which enable it to record greater dynamic range, providing you’re prepared to colour-grade the recording in post-production.

New to the A6600 is the option of recording in HLG (Hybrid Log Gamma) so that you can shoot HDR-ready footage for playback on your compatible TV directly in-camera.

The A6600 also has some more advanced video settings, such as Eye AF for movies, a MIC imput, and a headphone jack, all of which make it the best-appointed A6xxx-series camera for shooting video.

The A6600 also offers the ability to select, extract and save still images from movie footage directly on the camera, approximately 8 megapixel images from the 4K video and 2 megapixels from Full HD.

There is a Multi Interface Shoe / flash hotshoe on top of the A6600 for connecting an external flashgun or a compatible accessory, but this new camera is the first A6xxx series model not to also feature a built-in pop-up flash.

The Sony A6600 uses the latest menu design from the Alpha Ax-series cameras. It has a more logical structure, although as is traditionally the way with Sony's menu, still pretty complicated. There's now a My Menu tab that as the name suggests allows you to construct your own custom menu for easier access to your favourite camera settings.

The Sony A6600 uses a larger Z series battery, the NP-FZ100, that enables it to keep on shooting for a rated 720 shots per charge when using the viewfinder and 810 when using the LCD screen, a massive improvement on the A6400 which uses the smaller W series battery, and much better than most of its main rivals too.

The A6600 can also be powered and charged via a USB connection, which is useful if you’re without your charger but can access a computer, although it doesn't use the latest USB-C standard.

Finally there’s the battery compartment which, like all the other A6000-series cameras, also incorporates the single SD memory card slot (there are no dual slots on this camera).

It’s not a major bugbear, as opening the compartment to access the card won’t cause the battery to drop out, and the tripod mount is far enough away to avoid a mounting plate blocking the door.

Of more concern is the fact that the A6600 doesn't take advantage of the fastest UHS-II memory card standard, never mind use two of them, a very surprising omission for what is supposed to be the flagship camera in Sony's APS-C range.

Compared to the Fujifilm X-T3, which has dual UHS-II card slots, the A6600 looks very under-powered in this department, which is espeically annoying given its otherwise impressive abilities as a camera for capturing fast action.