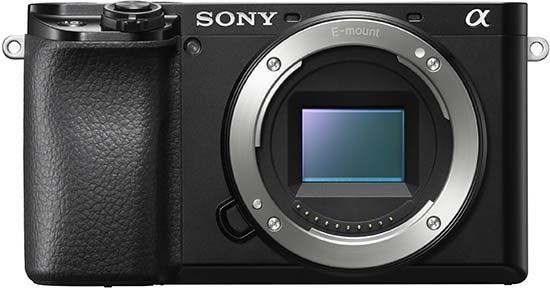 Autofocus performance has been greatly improved, with the A6100 offering 425 phase detection and 425 contrast detection AF points that cover 84% of the entire image frame.

This helps ensure accurate subject tracking, and with the aid of Sony’s powerful Bionz X image processor, gives the A6100 a claimed focusing speed of just 0.02 seconds, more than twice as fast as the A6000.

The Sony Alpha A6100 also offers real-time Eye AF and real-time AF tracking with AI-based subject recognition, which is instigated by half-pressing the shutter button, rather than via a custom button as on previous models, and the AF works in low-light down to -2EV.

Other key new features compared to the older A6000 model include a 180-degree tilting monitor with touchscreen operation, an improved menu interface, 11fps continuous shooting with continuous AF/AE tracking with the mechanical shutter and 8fps with the silent electronic shutter, built-in timelapse mode, Bluetooth connectivity, USB charging, a microphone input and support for the 1:1 aspect ratio for JPEGs.

The Alpha A6000 has been one of the biggest selling Sony cameras in terms of volume, so the new A6100 model that replaces it certainly has a lot to live up to.

We say "replaces" - for the short-term at least, Sony are continuing to sell the A6000, with the new A6100 effectively positioned above it in the range, at least until stock of the A6000 runs out.

A lot has changed in the six years since the A6000 was first released, although as with their other APS-C mirrorless cameras, Sony have resisted the temptation to change the external design of the new A6100 in any radical way - indeed, you'd be hard-pressed to tell it apart from the A6000 when viewing them side-by-side.

It measures 120.0mm x 66.9mm x 59.4mm and weighs in at 396g with the battery and a memory card fitted, almost the same as the A6400, although it has an all-plastic rather than magnesium alloy body, and no weather-proofing.

The front of the camera is dominated by the relatively large, rubberised hand-grip, which enables users to hold the camera comfortably enough with three fingers, and also conceals the shared battery / UHS-I memory card compartment at its base.

Our A6100 review sample came with the Sony E PZ 16-50mm f/3.5-5.6 OSS power zoom lens, which is currently the smallest E-mount zoom lens and which is the starter optic that most people will probably purchase.

When not in use, this lens retracts back into its housing, much like a compact camera lens, contributing a lot to the low profile of the Sony A6100 and making the combination easily compact enough to fit in a large coat pocket.

The main downside of using a collapsible power zoom is that it causes start-up (and wake-up) times to be longer than usual. Those who aren't keen on the idea of shooting with a power zoom can of course buy the camera in a body-only configuration.

On the back is a 3-inch widescreen LCD monitor, which retains the 922k resolution of the original A6000's screen.

This time around, though, Sony have implemented a 180-degree flippable design, rather than just 90 degrees of upward rotation and 45 degrees downward as on the A6000.

This make it more versatile for selfies and vlogging, although if you fit an accessory to the camera's flash hotshoe (like an external mic), you won't actually be able to use the screen in this position.

Sony have also implemented touch sensitivity to the screen, just like on the flagship A6600 camera. This makes functions like focus point selection much easier and more intuitive, especially given the lack of a rear AF joystick, and it even works while looking through the electronic viewfinder.

Unfortunately and somewhat bizarrely, though, you can't use the touchscreen to navigate the main menu or quick menu settings or even swipe through your images in playback mode, all rather stange limitations that are also shared by other Alpha cameras.

It’s the greatly enhanced AF system that really steals the limelight on the new A6100. Whereas the A6000's AF system featured 179 phase-detection AF points and 25 contrast-detection AF points, the A6100 gets a whopping 425 points of both varieties, phase and contrast, spread over almost the entirety of the sensor area (84% to be precise). This helps the camera achieve a quoted focusing time of just 0.02 seconds, exactly the same as the A6400 and A6600 models that were also introduced last year.

Eye AF is another part of the focusing system that has made its way down to the A6100 from the more expensive models in the range.

As on the A6400 and A600, Sony have implemented an algorithm that uses AI-based object recognition to detect and track the subject, improving the accuracy, speed, and performance of the continuous AF system.

You simply select the AF-C and Tracking AF modes, position the AF point over the subject that you want to track, half-press the shutter, and the camera will doggedly follow that subject wherever it moves in the frame. It doesn't have to be a person - the A6100 will track virtually any subject that you care to point it at.

It’s not just continuous focusing that gets a boost though, as continuous shooting is also enhanced. On paper the A6100 seems to be no faster than the A6000, with both cameras capable of shooting at 11fps using the mechanical shutter with continuous AF/AE metering.

What has been improved is the Live View - the A6000 just showed you the last picture that was taken in every burst mode, whereas the new A6100 can maintain a live view up to 8fps, which is much better for tracking moving subjects. At 11fps, it reverts back to the same behaviour as the A6000. There's also a bigger buffer of 77 JPG frames or 33 RAW files available on the A6100.

Note that when shooting in 4K at 24 and 25p, the camera utilises the full width of the image sensor to oversample from 6K's worth of data, but at 30p, a mild 1.2x crop is still applied.

The movie-making potential is further enhanced by 100Mb/s high-bit-rate XAVC S data encoding, as well as clean video output over HDMI and the inclusion of a 3.5mm microphone jack.

Unlike the more expensive cameras in the range, the A6100 doesn't feature Sony’s S-Log 2 and 3 gamma curves or and HLG (HDR) profile which enable it to record greater dynamic range.

There is a Multi Interface Shoe / flash hotshoe on top of the A6100 for connecting an external flashgun or a compatible accessory, and the camera also features a built-in pop-up flash.

To pop-up this flash you need to press a dedicated button at the top of the rear plate – in use we have found this recessed button to be a little fiddly, requiring a rather strong press to do its job. A clever hinged design allows the flash to be raised high above the lens to avoid red-eye issues.

The flash settings can be modified from within the main menu system, while the AE Lock button can be reprogrammed to provide easy access to flash exposure compensation. This is seldom needed though – as long as your subject is within range, the flash provides consistently good exposures.

Our only gripes with this flash are the low guide number (GN 6 in metres at ISO 100/21°) and the fact that it cannot act as a commander for wirelessly slaved system flashes – even though the camera itself has the capability, you still need a compatible hotshoe-mounted external unit to use that feature.

The Sony A6100 uses the latest menu design from the Alpha A7 III camera, rather than the one found on the A6000. It has a more logical structure, although as is traditionally the way with Sony's menu, it's still pretty complicated. There's now a My Menu tab that as the name suggests allows you to construct your own custom menu for easier access to your favourite camera settings.

The A6100 has a single MR mode on the shooting mode dial. This does have the benefit of providing a lot of memory modes - 7 in total. There are also the usual auto, semi auto and manual modes, plus a Scene Selection position, Sweep Panorama mode, and a Movie mode that works in conjunction with the video record button located on the right edge of the thumb grip.

New to the A6100 is the Slow and Quick (S&Q) mode, which as the name suggests gives you easier access to the camera's slow- and quick- motion video options (frame rates from 1fps to 120fps), as selected in the Movie1 tab / S&Q Settings option in the main menu system.

The Sony A6100 is a very customisable camera. The rear Fn function button displays a quick-access menu of frequently used shooting settings, and you can choose which items appear on this menu. There are also two Custom buttons which can each be assigned a frequently used function for direct access. Even the AEL button can be customised, along with the left, right, down and centre rear panel navigation buttons, as well as the Fn button’s role in playback mode.

By default, the Fn button activates the Sony A6100’s Send to Smartphone Wi-Fi function when in playback mode. This works in conjunction with Sony’s PlayMemories Mobile app and lets you transfer a full resolution JPEG image in a nippy three seconds. Of course, you’ll have to connect your smart device first, but NFC pairing makes this a painless process.

Even if you don’t have an NFC-enabled smartphone or tablet, Sony lets you scan a QR code displayed on the A6100’s monitor and this automatically enters the SSID password so you don’t need to type it manually. The camera can also be remotely controlled by your smart device, although you’ll need to first enter the A6100’s Setup4 tab on the main menu to activate the Remote Ctrl feature.

Just like on the Alpha A6400, a low-power, low-bandwidth Bluetooth 4.1 data connection is now also available on the A6100. This lets you connect your camera to a smart device even when the A6100 is turned off for easier transfer of images. The Bluetooth connection can also be used to sync GPS location data from your smartphone.

The Sony A6100 will capture an image within two seconds of power-up and keep on shooting for a rated 420 shots per charge, although this drops to 380 shots when using the EVF.

The A6100 can also now be powered and charged via a USB connection, which is useful if you’re without your charger but can access a computer, although it doesn't use the latest USB-C standard.

Finally there’s the NP-FW50 battery compartment which, like the other A6000-series cameras, also incorporates the memory card slot. It’s not a major bugbear, as opening the compartment to access the card won’t cause the battery to drop out, and the tripod mount is far enough away to avoid a mounting plate blocking the door. It’s just a pity the card slot’s location nestles right next to the door’s hinge, making it fiddly to insert and eject a memory card.