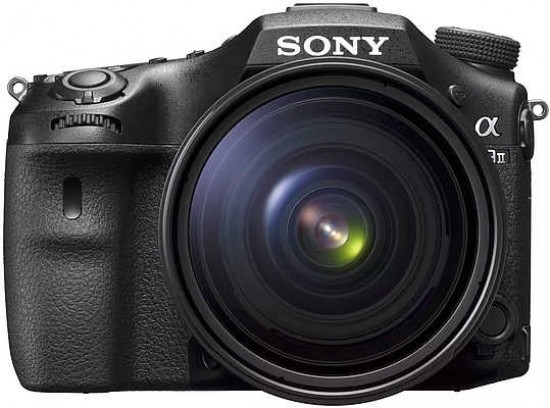 The Sony A99 II is the latest professional / experienced enthusiast full-frame camera from Sony to feature an “SLT” design. These types of camera use a translucent mirror, rather than a traditional mirror design, which allows for faster frame rates. Featuring a 42 megapixel full-frame sensor, other specifications include 4K video recording, a tilting LCD screen, dual memory card slots, an electronic viewfinder and a Bionz X Processor. It uses the Sony A Mount, which makes it compatible with a range of lenses - but crucially is different from the Sony E mount, which is found on the A7 range of full-frame cameras. The Sony SLT-A99 is available now priced at around £2999 / $3199 body only.

The Sony A99 II is aimed at high-end enthusiast or professional photographers, and as such, it is large and has a high number of dials and buttons. A chunky grip gives you plenty of room for your hand to fit comfortably, with your index finger resting on the shutter release button. The grip, and the rest of the body of the camera is textured with a high-quality coating, which along with the heavy weight and sturdy construction makes it feel very well constructed and durable. It’s also weather sealed, so it should withstand the odd rain shower or splash from a wave without too much trouble. The same goes for dust resistance.

Even though this is a large camera, Sony has actually managed to reduce it in size from the previous generation - quite an impressive feat considering the size of the sensor (full frame) and the technology inside the housing. It manages to reduce down the size while still keeping it big and bulky enough to satisfy enthusiast photographers.

The majority of the buttons are found grouped on the right hand side of the Sony A99 II. On the left of the top plate is a mode dial, which includes P,A,S,M settings as well as a fully automatic mode and space for up to three groups of custom settings. You’ll also find a movie mode, and a panoramic mode. You need to hold down a button in the middle of the dial in order to change between different exposure modes, which is useful for stopping accidental settings changes.

On the right hand side of the top panel, there’s the on/off switch, which is around the shutter release. There is a small panel on top of the Sony A99 II which shows key settings to help you quickly determine how you have the camera setup. You can light up this panel by using a small button just next to it.

As the viewfinder is electronic, there’s a button just next to it which means you can switch the viewfinder on, and the monitor off. There is also a sensor on the finder itself which means it will switch automatically between the two for a seamless transition. However, you may find that you want to have the screen always on, or the viewfinder always on - for example if you’re shooting at waist level you could switch the viewfinder to always off so that it doesn’t accidentally switch on and stop the screen from showing the view. Alternatively, switching the monitor off could save battery - you need to switch to “manual” in the main menu if you intend to use the finder in this way.

At the top of the Sony A99 II’s grip is a scrolling dial, which can be used in conjunction with another at the back of the camera to change different settings depending on the shooting mode you’re in. If you’re in aperture priority mode for example, both of the dials will control aperture. However, if you’re shooting in manual mode, one will control aperture and the other will control shutter speed.

Concentrating on the back of the Sony A99 II, and there’s also an array of buttons here. There’s a joystick which you can use to move the autofocus point around the frame to where you need it - note that the AF points don’t cover the entire frame. You can also press in the joystick to make certain selections in menus and so on.

There’s a function (Fn) button which allows you to access a quick menu for your most commonly used settings and functions. You can change what appears on this menu to make it suit your specific shooting needs, if for example you don’t use a setting all that often, you can get rid of it. Other buttons on the back of the camera include an AF/MF button, a display button and AEL lock button. There’s a dedicated button for video recording, which is a different colour and feel to the other buttons on the back of the camera - that helps to make it unlikely that you’d accidentally record a video when you didn’t want to.

A button can be used for zooming in to live view - which is handy when you’re photographing still life and macro subjects and want to check critical focus.

There are two buttons labelled c1 and c2, which can be customised to your preferred functions. There’s also a small dial on the front of the Sony A99 II which can be customised to a function - you need to press a button in the centre of the dial to activate the setting, and you can hold the button down to choose a different setting for this dial. It’s also possible to change the function of the central joystick button.

The main menu button is pretty much the only button on the back of the Sony A99 II which is found on the left hand side. With this you can access more complicated functions and settings than through the function menu or direct access buttons. As we’ve often found with Sony cameras, the menu is a little complicated, being subdivided into several different menus and pages. You will likely get to know it with some studying, but it feels like Sony probably could go further to simplify the menu.

As already mentioned, the viewfinder is electronic. That’s because the Sony A99 II uses a translucent mirror, making a conventional pentaprism optical viewfinder not possible. There will still be many who just don’t like electronic viewfinders, but this one is about as good as you can find. It’s large, bright and seems to suffer from no lag. There are benefits to electronic viewfinders - for a start you can see exactly what effect changing settings will make, and you can also preview your image in the viewfinder making it easier to tell if you’ve got the shot quickly. On the downside for this particularly finder, it can be quite difficult to see the AF point, depending on the subject you’re trying to photograph.

The screen is attached to a hinge which pulls out from the body into a range of different positions. It has an unusual mechanism which allows you to rotate it to face sidewards, but you can also face it completely forwards which is useful for group portraits and so on. Sony has decided not to make the screen for the Sony A99 II touch-sensitive. Although it may be useful in certain scenarios, when there as many direct access buttons, including the joystick, it’s not as missed as it may be on some other cameras.

Luckily, you can tell which one you are using through the viewfinder, as the more sensitive points will be signified by a rectangle, while the other points will use a square. Focusing is generally excellent, but with some notable exceptions. In good light, the camera has zero trouble locking onto the subject quickly and easily, however, for very low contrast subjects in tricky low light, only the cross-type points generally focus correctly - and even then it can be a little on the slow side - you may find that you have to get the camera to attempt to focus several times before it locks on fully.

When it comes to tracking focus, the Sony A99 II is very good at keeping the subject in focus - especially for subjects which follow a reasonably predictable path. Sony is hoping that this camera will appeal to sports and action photographers, and it has some excellent features that appeal - such as being able to shoot at full resolution for 12fps. It’s important to remember that this camera can shoot at that fast frame rate, but it’s available at the same kind of price as cameras such as the Canon 5D Mark IV, which only manages 7fps - generally speaking to get rates such as that, you need to step up to something like the Nikon D5 or the Canon 1DX II - cameras which cost in excess of £5,000.