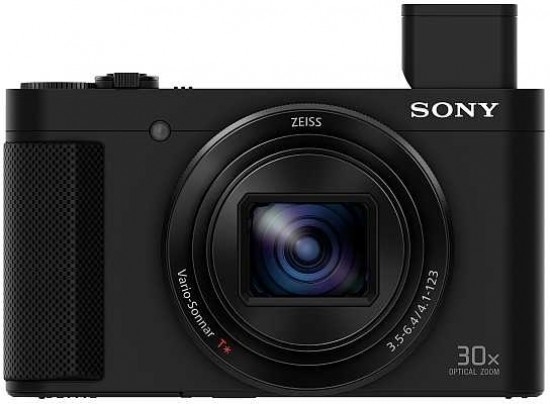 The Cyber-shot HX90V replaces last year's HX60V as Sony's high-end travelzoom compact camera. Like the HX60V it sports 30x optical zoom, though where this used a Sony G lens, the new Sony Cyber-shot DSC-HX90V gets a Zeiss Vario-Sonnar T-star coated optic. In an effort to stay competitive with class-leading cameras like Panasonic's Lumix TZ70, Sony has equipped the HX90V with a high resolution pop-up electronic viewfinder. It also gets a new lens barrel control ring and a flip-up screen. But it's the HX90V's sheer compactness that makes it stand out from the crowd, as it's appreciably smaller than key rivals like the TZ70, Canon PowerShot SX710 HS and Nikon Coolpix S9900. A host of extra features like Wi-Fi with NFC pairing, GPS, exposure bracketing and full manual control help justify what's currently a relatively high retail price of around £339/$428.

Although the Sony Cyber-shot DSC-HX90V may share some similar specs to the HX60V, on the outside they're very different animals. At 102 x 58.1 x 35.4mm, the HX90V lines up alongside Sony's WX500 as the smallest camera on sale to feature a 30x optical zoom. By comparison, the HX60V is 6mm wider, 5.5mm taller, 3mm thicker and 28g heavier. The HX90V is also noticeably smaller than the 30x compact camera competition from Canon, Nikon and Panasonic. And yet despite this, it's not short on features.

The 30x zoom lens is certainly impressive, giving a 24-720mm-equivalent focal range, but it's not enough to set the HX90V apart. That's left to the new pop-up electronic viewfinder. Keen followers of the Cyber-shot range will recognise this from the premium RX100 III, and it ejects in the same way. Flick the release switch by your left hand and up it pops, powering the HX90V on in the process. You'll also need to pull the eyepiece towards your eye though, as otherwise the EVF won't activate when you go to use it. Once it does burst into life, the 1,440k-dot resolution is crisp and colour reproduction faithful.

Also packed in to the HX90V's top panel is a pop-up flash, however this, the EVF and smaller case design means you no longer get a hotshoe mount for attaching a flashgun or other accessory. The HX60V's useful exposure compensation dial has also been deleted from the HX90V, and instead you'll have to nudge the rear panel D-pad down and use the surrounding control ring to adjust exposure. It's no particular hardship, but a dedicated dial would be even easier.

The compacted case design also has a knock-on effect of compressing the rear panel buttons together to a point that they're far fiddlier to use than a Canon SX710 HS or Panasonic TZ70. The lack of button space also means the rear thumb rest is small and not particularly grippy, although there is a good-sized – if plasticky – front finger ridge. This makes the HX90V far more comfortable to use than Sony's WX500, despite the two cameras sharing an otherwise-identical case design.

Whilst the Sony Cyber-shot DSC-HX90V's compactness is a mixed blessing compared to its predecessor, you do at least get an improved LCD screen. It's still a 3-inch, 922k-dot panel, but now it can flip up through 180 degrees, making low-level shots easier to compose and selfie-snapping a doddle. Nikon's S9900 features a fully articulating screen rather than just a tiltable unit, but it's also much bulkier than Sony's version.

Move round to the front of the HX90V and there's another new feature: a control ring around the lens. You'll find a similar gadget on the Panasonic TZ70, although Sony's implementation does feel very cheap and rather like it's just a lose piece of trim. The ring can be used to operate the zoom, but it can also be customised to control exposure compensation, white balance, ISO sensitivity, shutter speed and aperture. By default, it'll control zoom when the camera is in either of its automatic modes, adjust aperture in program auto, aperture priority and manual mode (with the rear control wheel altering shutter speed), and the lens ring sets shutter speed in shutter priority mode. If you activate manual focussing, the ring is then used to focus, and by pressing the Fn button on the rear panel, the ring will operate the last-used menu option.

The Fn button accesses a quick-reference menu of commonly required shooting settings. These include typical options like ISO sensitivity, white balance and flash modes, but also some features more often associated with DSLRs and high-end bridge cameras. You can chose between matrix, centre-weighted and spot metering options, or also dial in some flash exposure compensation. Focus area is adjustable, too, as is the amount of DRO (Dynamic Range Optimizer) that's applied to high-contrast shots. Even the drive modes include some settings not usually found on a compact camera. In addition to the self-timer (2, 5 and 10 second delay options) and continuous shooting (10fps max for 10 frames), there are also extensive bracketing options. You can choose from manual and continuous three-frame exposure bracketing with multiple exposure variation options, plus white balance and DRO bracketing.

When in playback mode, the Fn button can be used to activate the Sony Cyber-shot DSC-HX90V's Wi-Fi connectivity to send a single image or multiple shots to a smartphone or tablet. NFC pairing makes establishing a connection as simple as just tapping your smart device against the camera, and once connected, a full resolution image will take roughly eight seconds to transfer via Sony's PlayMemories Mobile app, available for Android, iOS and Windows Mobile. Unlike many Wi-Fi systems, the app won't let you remotely control the HX90V from a smartphone, but there is a way around this. The camera can be upgraded with Sony's PlayMemories Camera Apps, one of which will enable remote control from a smartphone.

In addition to Wi-Fi, the HX90V also packs GPS to geolocate your images, and with the aid of Sony's PlayMemories software, you can plot your shooting locations on a map. Activating GPS does inevitably sap some battery life, but given the HX90V will manage an excellent 390 shots-per-charge without GPS, activating it will be relatively harmless. If you don't feel a need for GPS, then Sony also offers the HX90 non-V model which omits it.

Being a high-end compact camera, the HX90V features a full range of creative shooting options like manual control, shutter and aperture priority modes. There's also a Memory Recall mode (labelled MR on the mode dial) whereby you can store a particular shooting set-up for quick recall. In addition to a full complement of scene modes, the HX90V also gets Sony's iSweep Panorama feature which occupies a dedicated position on the mode dial. Finally, there are three automatic modes: program auto enables the usual adjustment of ISO sensitivity, white balance, metering and focussing options whilst maintaining automatic shutter speed and aperture. Then there's the standard scene-detecting fully automatic mode which is selected by opting for the green mode dial icon. Alongside this is the yellow Superior Auto mode icon which unleashes all of the Bionz X processing power to automatically capture multiple frames in low light or high contrast scenarios to help minimise image noise or boost dynamic range. This trickery can noticeably enhance image quality, but you'll need to wait a frustrating second or two for the camera to process a multi-frame image.

With so many modes and features, the Sony Cyber-shot DSC-HX90V can be somewhat intimidating to get to grips with if you're coming from a budget no-frills compact camera, especially if you delve straight into the plethora of options in the main menu. Sony's menu design is clear, with settings laid out in logical tabs and sub-pages, though the positioning of particular options within these isn't always intuitive. Fortunately the Fn button and its quick reference menu mean you can usually steer clear of the main menu, whilst the mode dial can be configured to display a brief splash screen graphic explaining the mode you select. At the bottom of the rear panel, to the left of the playback button, is another helpful control labelled with a question mark. Press it and useful hints and tips are displayed to assist you in shooting whatever scene is detected by the HX90V's automatic shooting modes.

The Sony Cyber-shot DSC-HX90V is a tad sluggish to power up and snap an image, taking approximately 1.8 seconds, although this is only marginally slower than average. Once up and running, fast autofocussing ensures daylight subjects are locked on to almost instantly, and with the aid of the AF-assist lamp, autofocussing only slows fractionally in low light.