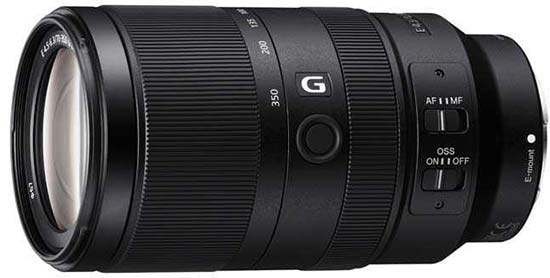 The E 70-350mm F4.5-6.3 G OSS is an affordable 5x ultra-telephoto zoom lens for Sony's range of APS-C cropped-sensor mirrorless cameras, such as the flagship Alpha A6600 that we tested it with.

It's equipped with a customisable focus-hold button plus a zoom lock switch, and is also usefully dust and moisture resistant.

The Sony E 70-350mm F4.5-6.3 G OSS is impressively small and light considering the incredibly versatile focal range that it covers, weighing in at just 625g and measuring 14.2cm in length, although it does extend by an extra 4.8cm when the lens is set to 350mm.

Build quality is very good given the relatively entry-level price-point. The Sony E 70-350mm F4.5-6.3 G OSS feels solid enough in your hand, even if it is entirely made out of plastic, with a metal lens mount.

The zoom ring is generously wide, and has a ridged, rubberised grip band, whilst the focusing ring has the same textured finish but is perhaps a little on the narrow side.

The Sony E 70-350mm F4.5-6.3 G OSS boasts built-in Image Stabilisation which is activated via the OSS On/Off switch on the side of the lens.

If the camera body supports it, Sony's IS technology is also able to detect intentional panning movement and automatically switch from the Normal IS mode to the Panning IS mode.

Towards the front of the lens there is an unmarked “focus hold” button. You can customise what the focus hold button does in the main menu of the camera you’re working with - by default, you’ll be presented with focusing options, but, if you prefer, you can assign other functions to it, such as Right/Left Eye Select.

The zoom lock swith is located to the right of the 70mm zoom setting. As its name suggests, this switch prevents the lens from extending under its own weight. Note that it can only be engaged when the focal length is set to 70mm.

The other control on the lens barrel is a traditional AF / MF switch which allows you to quickly switch between AF/MF focusing without having to delve into the camera's main menu system.

The Sony E 70-350mm F4.5-6.3 G OSS has a rather narrow focus ring given the overall size of the lens barrel. There are no hard stops at both ends of the range, making it more difficult to set focus at infinity. Polariser users should be pleased that the 67mm filter thread doesn't rotate on focus.

We didn't experience too much "hunting" at all, either in good or bad light, with the lens accurately focusing correctly most of the time. It's also an almost silent performer, thanks to the built-in XD (extreme dynamic) linear motor, which makes this lens well-suited to both video recording as well as stills.

This lens ships with a circular plastic lens hood (ALC-SH160) and front and rear lens caps, but sadly no protective case.

Chromatic aberrations, typically seen as purple or blue fringes along contrasty edges, are pretty well controlled with this lens - the example below shows the worst-case scenario.

With the Sony E 70-350mm F4.5-6.3 G OSS lens wide open, you can see some obvious light fall-off in the corners at both ends of the zoom range. Stopping down helps, although to completely get rid of this phenomenon, you will need to use an f-stop of f/8 or smaller at 70mm and f/11 at 350mm.

The lens is quite susceptible to flare when shooting directly into the sun, though, something that is mitigated somewhat by fitting the supplied lens hood.

The following example illustrate how close you can get to the subject at 350mm.

Sony have employed an iris diaphragm with seven rounded blades for a pleasing rendering of the out-of-focus highlights.

Based on what we have seen, we can say that they have largely succeeded. Below you'll find some examples, but you are also encouraged to check out our sample images.