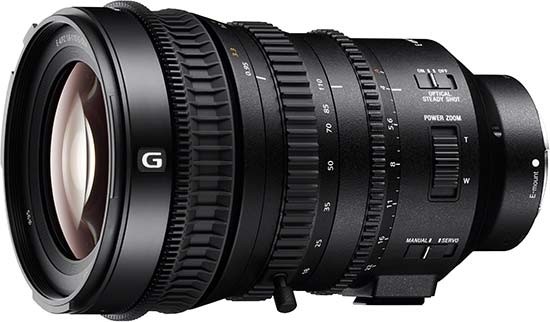 The Sony E PZ 18-110mm f/4 G OSS is quite an unusual lens for photographers to consider, but it is useful as a superzoom lens which offers a wide constant aperture. Although primarily intended for a video audience, it’s easy to see how a stills audience would also be attracted to it.

The Sony E PZ 18-110mm f/4 G OSS is easy to use, and with the abundance of lens rings, you get quick and easy access to every setting you need. It is impressive in its silent focusing, as well as compensating for problems, such as image shift, which you might normally associated with zoom lenses for video.

Images (and video) directly from the camera when used with the Sony E PZ 18-110mm f/4 G OSS display a nice level of saturation, as well as excellent detail. Shallow depth of field images are rendered with attractive bokeh. Chromatic aberration doesn’t seem to be too much of an issue, but distortion is reasonably obvious at the wide angle end of the lens. It also suffers a little from light drop off at the widest aperture setting, but for most subjects this shouldn’t be too noticeable.

In short, this lens is an interesting proposition for the E-mount, but is by its very nature reasonably niche. It’s large and cumbersome, but, it’s not too weighty making it ideal for handheld video shots, and arguably for somebody who really wants a wide aperture and flexible focal length choice in one package.

The handling of the Sony E PZ 18-110mm f/4 G OSS makes it an obvious choice for professional videographers who need a super high quality lens setup without the hassle of having to change lenses, but for photographers, it’s likely that other lenses will suit them better.