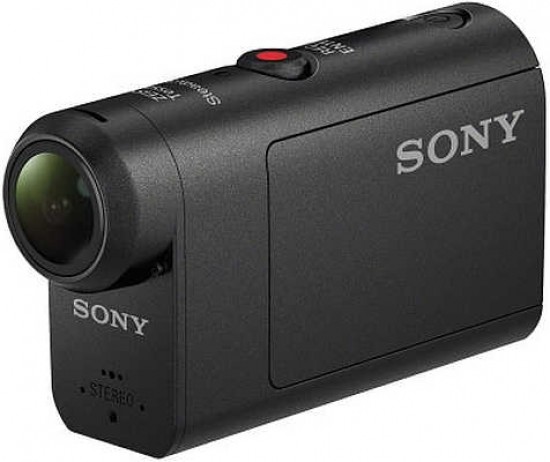 The Sony HDR-AS50 is an affordable action camera. It has an 11.1 megapixel back-illuminated CMOS sensor paired with a Zeiss Tessar lens, and features advanced SteadyShot image stabilisation. Adjustable and enhanced beep sounds as well as three tally lights on the top, front and back have been added to allow greater notice of camera conditions even when wearing a helmet and when mounted on handlebars or monopods. Divers and swimmers can benefit from a supplied underwater housing, which allows footage to be captured down to 60m under water. Sony’s own in-built movie creator, Highlight Movie Maker, incorporates face detection and automatically assembles a highlight package which can be viewed and shared immediately. The Sony HDR-AS50 costs around £179 / $199.

As demonstrated by the success of the GoPro brand, action cameras remain big business – appealing to those who want to film and/or photograph their latest bouts of derring-do – or simply a cycle ride – without risking their latest expensive smartphone, or indeed system camera, in the process. In other words, here is a definitive reason to invest in a dedicated camera rather than just using your mobile device. Suggested retail cost of the Sony HDR-AS50 at the time of writing is £179, which means it won’t break the bank either.

Whilst Sony may not be the first brand the man on the street thinks of when considering which action camera to buy, it has been making models such as the high definition HDR-AS50 – first announced back at CES 2016 – for a few years now, and here offers both a conveniently compact yet high quality item that rests easily within the palm of your hand, whether ensconced in its protective clear plastic housing, or in its ‘nude’ black liveried state.

Unsurprisingly the protective housing (included in the box) matches the camera button for button, of which there are merely five – including the main power activator – thereby keeping matters (and operation) simple. Said plastic housing (the MPK-UWH1) is also stated to be good for using the camera underwater up to an impressive 60m in depth, as well as being dust and shockproof. We also get flaps covering the USB port and battery compartment, whilst external storage is via the thumbnail-sized microSD card, and predictably so, given the unit’s overall compact dimensions. The supplied lithium ion battery is recharged within the camera, via a supplied USB/mains lead, as it is with our mobile phones; a tiny indicator light glowing orange as its power is replenished.

Obviously designed to be unobtrusive and to not get in the way, this Sony’s height and length are smaller than a credit card, whilst the width matches that of your thumb. Official dimensions are 24.2x47x83mm, whilst the weight is a far from substantial 83g including the NP-BX1 battery supplied but not including the waterproof housing.

The fact that there is no grip or way to comfortably hand hold it, either within or without said housing, suggests that this is designed to be screwed onto a tripod or mounted in some fashion – then simply activated and left to run. A screw thread has been provided on the actual unit and on the external housing also – so, on the plus side, there is no adapter needed to be able to use it with a tripod. Obviously though you’ll have to budget extra for said tripod, or whichever mount is chosen.

Spec wise, the HDR-AS50 isn’t going to challenge your DSLR or system camera, even if it does feature a Bionz X processor as found in Sony’s top-end models – neither is it intended to. Rather, here, it’s a case of best utilising the Sony’s particular set of skills, namely a 11.1 megapixel, 1/2.3-type back-illuminated Exmor R CMOS sensor (lest we forget, Sony is the biggest manufacturer of camera sensors worldwide), suggesting a better than otherwise lower light performance, coupled with a Zeiss Tessar lens with fairly standard f/2.8 maximum aperture, 3x ‘smooth zoom’ option and two angle setting modes (either wide – equivalent to 18.4mm for that fish eye effect – or ‘narrow’ at 21.8mm for simply an ultra wide perspective). Handheld operation is supported by Sony’s SteadyShot image stabilization, which here is of the electronic variety, rather than our preferred choice of optical or sensor shift to help avoid blurred images. Minimum focus distance is again fairly standard, at 30cm. It wouldn’t be action camera without a burst shooting function, naturally, and here the camera offers up to 8fps.

In terms of MPEG-4 format, Full HD 1920x1080 video, we get the ability to shoot at frame rates of up to 60fps, or otherwise 120 or 100fps at HD resolution to enable slow motion replay, as well as a 4K time-lapse option. A stereo microphone is built into the camera, located beneath the lens, but the adjacent speaker is unsurprisingly mono. Still image resolution is given as 11.9 million pixels, with the option provided of creating a time-lapse video using 4K stills, using Action Cam Movie Creator software or Action Cam App.

Fresh bleep sounds and lights have been implemented on this version to indicate various camera functions have been selected and/or are underway – something which Sony says it has implemented as a direct result of user feedback. It’s worth noting that since there is no viewfinder built into the camera itself – the tiny postage-stamp LCD supplied just displays available shooting modes and settings. If utilising the Sony HDR-AS50 itself, it’s a case of point and hope rather than precision here; it’s all about capturing the experience rather than symmetrical compositions.

However Sony also provided us with a wrist-mounted remote – affixed to your person via Velcro strap - that provides us with a second screen, thereby acting as a remote viewfinder. To be honest we felt this is needed – otherwise all that happens is that you end up with shots displaying wonky horizons. In practical terms this means that the camera itself can be mounted to the handlebars of your bike, whilst you line up the shot, or adjust the Sony HDR-AS50’s settings via your wrist.

The buttons on both this accessory unit and the camera itself are basic but understandable – again operation is intuitive enough to avoid having to faff around with the basic user guide to get going, or have to pause when you’re in the heat of the action. If you want to invest in the remote – which we’d argue is worth it in order to go ‘hands free’ – you’ll have to stump up an additional £120 for the purpose. It’s worth it simply because we ended with a lot of skewed shots with tilted horizons when we weren’t using the HDR-AS50 paired with a screen. We welcomed the capability to line up our shot first. In practice it took just a few seconds for the handset to ‘find’ the camera and pair up with it. If we were constantly getting a spinning symbol suggesting it couldn’t connect, the old failsafe of turning it off and on again seemed to right the problem. It goes without saying that the camera itself needs to be activated and up and running first before you even attempt to connect.

Control wise we get a big red record button on top of theSony HDR-AS50 that is hard to miss, with a power button sitting just behind it and an indicator light located just in front. The camera powers up in two to three seconds, with a bright sounding bleep indicating we’re ready to go. On one flank of the camera is the compartment for the battery, which takes up most of the real estate; indeed, in keeping things manageably compact, the Sony HDR-AS50 is barely bigger than the rechargeable cell that powers it, which is an impressive feat of engineering in itself.

On the other flank we find a basic set up of three operational buttons – two being for tabbing through menu options, with the ‘menu’ button itself being the third. Settings are displayed on the tiny LCD screen that sits in their midst. We found tabbing through and selecting the options we wanted a little fiddly to start with, as the record button on the top plate also doubles up as an ‘enter’ button for implementing the chosen settings, whether these be set up or operational. Obviously there are just two shooting modes here – for stills or video, with a set up menu pertaining to each, which keeps things simple on the face of it. However there are a myriad of options for each – key among them the narrow or wide-angle lens shooting settings, along with the predictable self-timer and time lapse settings.

The back of the Sony HDR-AS50 features a sliding lock button to prevent the battery compartment at the side from being opened accidentally, adjacent to which is a loose plastic cover for the multi application port to which the USB lead provided in the box is attached. The base of the camera features the aforementioned screw thread for a tripod mount and fingernail sized flap covering the slot for our microSD card.

With build quality being good, the price being fair and operation being reasonably straightforward once you’ve got the hang of things, the unobtrusive Sony HDR-AS50 is a welcome addition to the action camera fraternity. But what of the imagery it produces? Does this justify a purchase, or is back to drawing board? Read on to discover more…