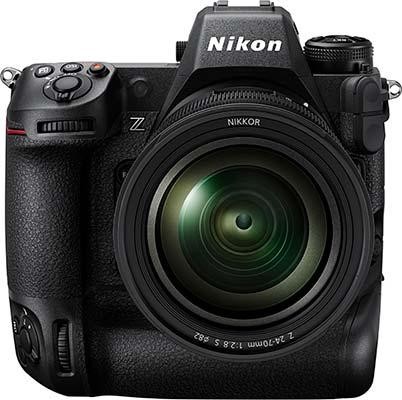 The Nikon Z9 has just been unveiled, a new flagship 35mm full-frame mirrorless camera that will sit above the Z7 II and Z6 II in Nikon's Z-series range.

The professional level Z9 will feature the Z-mount and have a newly developed FX-format stacked CMOS sensor and a new image-processing engine, although there's no word yet on either the number of megapixels or the burst shooting rates that it will offer.

It will also feature 8K video recording, the first time that any Nikon camera has done so, which allows the Z9 to challenge the likes of the Canon EOS R5 and the Sony Alpha 1, the only other mirrorless cameras that currently provide 8K recording.

The use of a stacked sensor design and inclusion of 8K video strongly suggests that the Z9 will use the same sensor found in the Sony Alpha 1 (as Sony supplies Nikon's image sensors).

In a design move that will likely split opinion, the Z9 features a built-in vertical grip with an array of replicated controls, much like the Nikon D6 DSLR. It will therefore be significantly larger than both the Z7 II and Z6 II, which share the same size and control layout and which instead use an optional battery grip.

Indeed, from the front at least, the two cameras look pretty similar, so the Z9 looks set to replicate the D6 as the best camera that Nikon can possibly make, just this time without a mirror.

It might even exceed the performance of the D6, as Nikon have publicly stated that the Z9 will "deliver the best still and video performance in Nikon history" and that it offers an "unprecedented experience in terms of outstanding performance and operability, and exceeds that of previous digital-SLR and mirrorless cameras." We can't wait to try it out!

But wait we must, as although the Nikon Z9 is scheduled for release in 2021, it's still currently in development and the exact timing will only be announced at a later date - so probably best to expect mid-late 2021 then, maybe even in time for the Tokyo Olympics in July...

As is typical of development announcements, Nikon have been incredibly tight-lipped about what the Z9 will actually be capable of.

The new stacked sensor hints strongly at fast burst shooting, though, probably on a par with the insane 30fps speeds that the Sony A1 offers.

It will definitely have 8K recording and, in Nikon's own words, "various other video specifications that fulfill diverse needs and workflows", so expect a raft of different bit rates, codecs and profiles that will satisfy the needs of the most demanding cinematographers.

As it offers 8K video, the sensor's megapixel count will be in excess of 35.6million effective pixels, as that's the minimum required for 8K.

Nikon haven't officially set a release date for the new Z9 yet, but with the Tokyo Olympic Games on the near horizon, we'd hope that this new flagship sports and video camera would make its debut in time for professionals to capture all the action at the world's premier sporting event.

The price of the Nikon Z9 has not yet been revealed, but with the equivalent D6 DSLR camera costing £6,300 / $6,500, the new Z9 mirrorless camera will likely be priced at the same level, or even slightly more if it truly does deliver better image quality and performance than the D6.