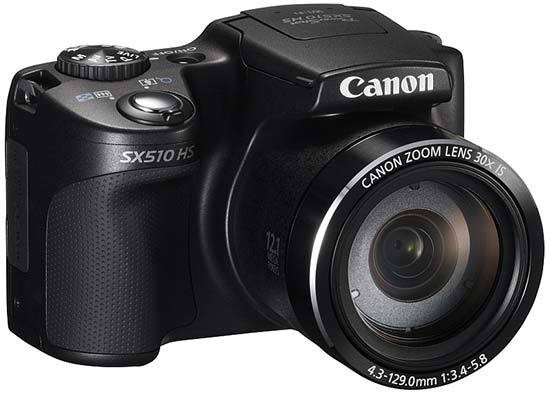 The Canon PowerShot SX510 HS is a super-zoom digital compact camera featuring a 30x optical zoom, 12.1 megapixel CMOS sensor, DIGIC 4 processor, optical image stabiliser, FullHD video, wifi connectivity and GPS location tagging. That's a lot of technology inside a body that is 75% lens. Can it stand up to our rigorous testing regime? Priced at £229 / $249, we hope so. The Canon PowerShot SX510 HS is available in black only.

One of the most exciting things about opening the box of a camera that is a follow on from a previous model is checking what the physical and technological differences/upgrades are. We opened the lid of the Canon PowerShot SX510 HS and removed the paperwork which includes a Getting Started guide, warranty, promotional leaflets and CD which includes a full manual and photo editing software.

Underneath all this was the camera surrounded by the accessories included such as a lithium ion battery, charger and mains cable. There's also a USB cable and a neck strap for the camera because it's slightly larger than a typical digital compact camera. Of course, this is because of the 30x optical zoom lens stuck out the front of an otherwise slim body. The zoom isn't any larger or smaller than the previous model – the SX500 HS. In fact, the entire lens system is identical down to the same amount of lenses in the same amount of groups. That's a disappointing discovery as the lens quality on the SX500 HS wasn't that good, with chromatic aberrations and some lens distortion at wide-angle.

One area that has changed is in the sensor. The Canon PowerShot SX510 HS has a 12.1 megapixel back-illuminated CMOS sensor which is a 4 million pixel drop in resolution from the 16 megapixel CCD we saw in the SX500. On top of that is the back-illuminated technology to increase low light sensitivity and the change from a CCD which records sharper images, to a more fuel efficient – but softer – CMOS. Still, in our review of the SX500 we got noise showing through at the low ISO settings, so hopefully, this change in sensor will obviate the noise problem. However, the ISO sensitivity has been raised from ISO 1600 to ISO 3200.

The Canon PowerShot SX510 HS is styled like a bridge camera and has manual control, yet Canon have placed it outside this category and instead placed it in the Superzoom section. That particular cap still fits and it's most likely that the SX510 HS isn't in the Bridge section because of the lack of raw recording. Because of the large zoom lens, the camera has an oversized grip to the right so that you can hold on firmly due to the increased weight when compared to a compact camera with a more modest zoom. The shutter release sits on top of the grip with the zoom switch circling it. The command dial that sports the afore-mentioned manual controls is situated just behind with a slight overlap of the back to access it with the thumb. It's unlikely you'll do this though because it's quite firm. We found ourselves using our fingers as well. That's not a bad thing, in fact we'd rather have a wheel that won't slip out of the mode we've selected.

Two other new features to the Canon PowerShot SX510 HS are GPS and wi-fi connectivity. The camera does need a smart phone to connect through and it also uses the phone's GPS system to log with it's own. So don't be under any reservations that the SX510 HS has a GPS system. It doesn't, it simply ties in the GPS details with your phone to the time and date information that it has recorded with each picture. Of course that means you have to have the date and time correct on the camera.

The Canon PowerShot SX510 HS can take up to 3.8fps (frames per second) in continuous shooting mode. That sits about right with what we managed to photograph in one second. From a cold start, the camera can start up, focus and take a picture in 1.5sec. That's pretty cool given that the standard for a camera of this type is around 2-2.5sec.

There are a couple of menus available on the SX510 HS. The easiest one to access is the Function menu. It's found on the pad on the back of the camera. Pressing the centre button brings the menu up on the left hand side of the screen. You can navigate your way through by using the up and down navigation pad. You can scroll through using the wheel around the pad as well, but this requires pressing right or Set to go into sub-menus. In the Function menu, you can access most used features, such as white-balance, resolution, compression, ISO, burst modes and metering.

There's also a Main menu that accesses the more in-depth features of the Canon PowerShot SX510 HS. There are two tabs to choose from. One allows you to make changes to operations that affect the shooting modes while the other programs the camera operations such as date & time, languages, power saving mode and screen brightening. You can also format the card or amend how it counts the photographs you take. The screen is lovely and bright with a black background, grey box and orange highlight over white lettering.

Playback is accessed by pressing the blue triangle button on the back of the Canon PowerShot SX510 HS. It will work even when powered down, although you'll have to hold the button down for a few seconds if the camera is off. The pictures will display full size and by pressing the Disp button, you can add additional information to look at including a histogram. The Playback menu will allow you to perform basic editing on the pictures, such as i-Contrast, Red-eye correction and cropping. You can also resize them and add digital effects using the My Colors sub-menu. You can create a slide-show of your photographs, which is great for displaying a holiday collection. The second tab is for the DPOF system. It allows you to create print orders, select pictures to print and how many. This is available for if you connect the camera directly to a printer without using a computer first.