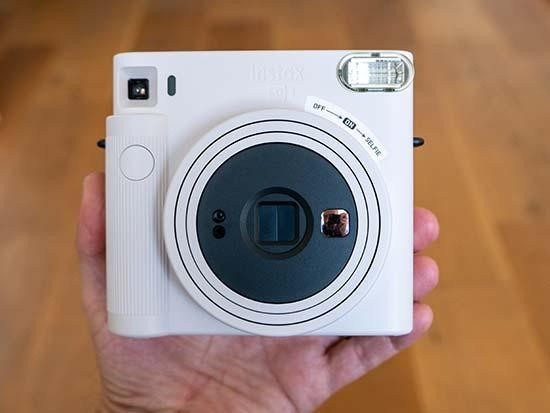 The new Fujifilm Instax Square SQ1 bridges the gap between the Instax Mini 11 and the hybrid Instax SQ20.

It brings together the simpler, analogue nature of the Mini 11 with the Square film format of the SQ20, in a refreshed, more modern looking, simpler-to-use design.

It also effectively replaces the 2-year-old Instax Square SQ6, although you can still buy that older model at the time of writing.

Fujifilm has included a couple of features in the Instax SQ1 that will increase your hit ratio of usable pictures; auto exposure and a built-in 'selfie' lens setting.

No longer is it down to the user to select the exposure mode. No longer are separate attachments required to adjust the close focus distance for selfies. It's all down to the camera. Phew.

Because while instant photography has never been about technical perfection, be it accurate composition, sharp focus or exposure in your shots, it is particularly disappointing to see an unusable picture emerge on a sheet of paper that set you back the best part of £$1.

As it name suggests, the SQ1 uses the Instax Square format, which is larger than Instax Mini and measures 86 x 72mm, with a 62 x 62mm image size.

It comes in a cartridge containing 10 sheets. A single pack of 10 sheets typically costs £8.99, but you can usually buy multi-packs for a lower cost per unit.

You get a colour-matched wrist-strap supplied with the Fujifilm Instax SQ1 and 2x CR2 batteries.

As an instant camera, the Instax Square SQ1 is reasonably large. While you're certainly not going to be able to squeeze this in your pocket, when switched off, you can happily fit it into a small bag or similar.

The Instax SQ1 is also much smaller than the only other fully analogue camera currently on the market using the Instax Square format film - the Lomo'Instant Square.

It's about the same size and weight as the previous SQ6 model, but it now features a built-in hand-grip with a vertically ribbed finish that is a big improvement on the flat, smooth surface of its predecessor.

The same ribbed grip continues around the rear of the camera (which holds the 2x CR2 batteries).

We still found ourselves needing to concentrate a little to avoid dropping the Instax Square SQ1 and certainly appreciated the wrist strap as a back up.

The camera is of course made from plastic, so ideally you won't drop it, but it is robust enough if you do.

Being a budget-level instant film camera, the Fujifilm Instax Square SQ1 is a doddle to setup and comes with a concise instruction manual to follow for a smooth experience.

To get going, you'll need to load the camera with the two supplied CR2 batteries and, of course, the instant film.

If the window by the rear door's catch is yellow, then there is film already loaded. If it's black, it's empty.

The other window displays how many sheets remain in the pack of ten cartridge and when S is displayed it is safe to load a cartridge.

With the Instax SQ1's rear door open, the yellow mark on the cartridge lines up with one inside the camera. Slot in the cartridge and close the door. Simple.

Before you get started, you'll need to take a shot to eject the safety sheet from the cartridge.

Try to remember not to open the back of the film door with film inside it - if you do, then any remaining film will be exposed to light and ruined.

There's no longer a switch on the top of the camera that can be used to turn it on and off.

Instead the Instax Square SQ1 is powered on by rotating the lens barrel from Off to On.

When you switch on the SQ1, the front lens elements extends from the body of the camera.

Another turn of the lens barrel from On to Selfie puts the lens into 'Selfie' mode, which changes the focus distance to 0.3m-0.5m. Otherwise, the focus range is from 0.3m to infinity.

The Selfie position is also the recommended one for taking close-up macro shots, although make sure you don't get any closer to your subject than 30cm, otherwise it will be out of focus.

It's much quicker to go from the off position to the on position than the Lomo'Instant Square, with everything fully automated with no need to manually extend any part of the camera before you get going.

When you're ready to take a shot, the shutter release button is built-into the grip on the front of the Fujifilm Instax Square SQ1 and only requires a fairly gentle press, so much so that we inadvertently took a couple of shots completely by expensive mistake!

The print will pop out of the slot at the top - it takes roughly 90 seconds for the image to start appearing, with it developing fully over the next few minutes.

The lens has a 65mm focal length, which in this format translates to around 35mm - that's a moderate wide angle.

With a subject around a metre away, you'll get a good amount of surroundings in the shot. For a selfie from around 0.4m, you can comfortably fit in two people, but if anyone else jumps in it's a real squeeze.

Shots can be composed using the basic optical viewfinder, although you won't want to rely on its accuracy down to the T, especially for close up subjects. Also, you really have to press your eye in close in order to see through the finder in the first place.

For accurate framing, the 'O' seen in the middle through the viewfinder should be positioned on the centre of your subject.

As is pretty much always the case with instant photography, though, it's a little bit of trial and error figuring out what is likely to be in the shot and what isn't - especially when you're shooting close-ups.

On the lens itself is a tiny mirror that can be used as a guide for selfies, which proves to be a surprisingly helpful aid. Also guidance regarding image composition can be found in the instruction manual.

When taking shots, you'll need to be aware of where your hands are holding the camera because you will not want to obstruct the built-in flash.

It's worth noting that the automatic flash fires every time a photo is taken. If we had a choice, the flash would be on by default but with an option of deactivating it for the picture you are about to take.

The auto exposure (AE) light and Flash Light sensors are both found on the lens, opposite the mirror, a clever position which makes it practically impossible for them to be inadvertently blocked.

The different shooting modes which you could choose on the Instax Square SQ6 - macro mode, landscape mode, double exposure, darken and lighten - have completely disappeared from this new model - it really is a very simple point and shoot experience.

There's also no longer a timer button, which was useful for timed selfies, or a flash on/off button, as the flash is now always on.

You can attach the supplied wrist-strap to the Instax Square SQ1 by hooking it onto the two strap holders on the side of the camera.