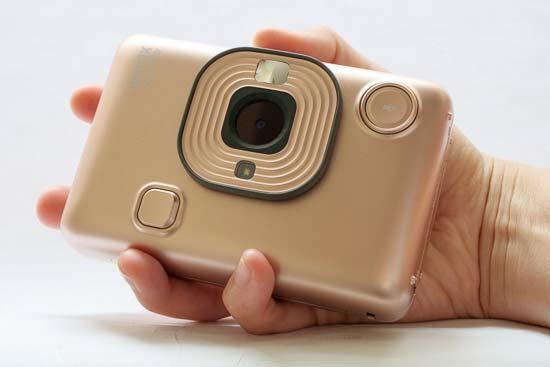 Announced in 2019, the Instax Mini LiPlay is the latest instant camera from Fujifilm. It pairs a digital camera with an inbuilt Instax Mini printer, and also introduces audio capture for the first time. You can also use the LiPlay to print images from your smartphone (or indeed any image file found on your smartphone), too.

The Instax LiPlay is the smallest and lightest hybrid instant camera in Fujifilm’s history, and is available in three different colours - Stone White, Elegant Black and Blush Gold (pink).

Inside the Fujifilm LiPlay is a 1/5-inch CMOS sensor which is capable of producing digital images of 2560x1920 pixels. The fixed lens offers a 28mm equivalent focal length, with an f/2 lens. Using the camera is pretty much entirely automatic, with a number of different effects which can be utilised for those who would like to get a bit creative.

The camera uses Instax Mini film, which is available to buy in a couple of different varieties, including with a traditional white frame, or with various different fun colours, such as rainbow, “shiny stay”, and “candy pop”. At the time of writing, a single pack of 10 Instax shots will set you back £9.93, but you can usually pick it up a little bit cheaper if you buy in bulk.

The Instax Mini LiPlay uses a fun design which is designed to be attractive to the target audience. With nicely rounded curves and three different stylish colourways, we can see it being popular particularly with a younger audience.

Being the smallest instant camera in Instax history, the Instax LiPlay is more transportable than many of the other cameras in the brand’s back-catalogue. It’s not quite pocket-friendly though, so you will need a small bag to store it in.

Designed to be as user-friendly as possible, learning how to use the Instax Mini LiPlay shouldn’t be too complicated. The camera is primarily designed to be used in portrait-format orientation, so that when the Instax prints are revealed, the larger part of the frame will be at the bottom.

You can choose to ignore this and shoot in landscape orientation if you prefer though, of course. As such, the text on the camera will be the “correct” way up only when holding the LiPlay in this orientation.

On the front of the Fujifilm Instax Mini LiPlay, you’ll find the lens, which is surrounded by a textured frame. Inside the frame you’ll see the flash, which can be switched on or off from the menu.

There’s also a small mirror which you can use to help you accurately line up selfies.

An intriguing button is found towards the bottom of the Instax LiPlay - it has a microphone symbol on it. This is one of the unique functions of the LiPlay - if you press this before taking a photo, you’ll activate a microphone which will record up to 10 seconds of audio before and after you take a shot.

You can then listen to the sound in playback, or quirkily by scanning a QR code which you can include on your Instax prints.

The shutter release button is also found on the front of the Instax LiPlay, which feels slightly strange in use for those who are used to finding buttons in the more traditional place (on top of the camera).

Although awkward at first, you do eventually get used to using it. The button itself is square, which helps you to differentiate it by feel to the audio button, which is round in shape.

You’ll find the power button on the side of the camera. On the same side are three buttons which are labelled 1, 2 and 3. Press each of these to automatically activate frames for your pictures - you can choose different frames to assign to these buttons by using the LiPlay smartphone app (which we’ll come onto later).

Also on the same side of the Instax LiPlay is a slot for inserting a microSD card. The LiPlay comes with an inbuilt memory which can store approximately 45 images, while up to 850 images can be stored per 1GB of memory on a Micro SD card - so it’s worth investing in one of those unless you want to frequently delete your images.

Flipping to the back of the Instax Mini LiPlay and you’ll see that again it’s quite a simple set-up here. There’s a small, 2.7-inch 230k-dot LCD screen, which doubles up as the screen door for the film slot. Slide across a switch to open the film door when you want to insert a new pack of Instax film.

When the Instax LiPlay is on, you’ll see some helpful information on the screen. A dotted display at the screen shows how many prints you’ve got left in your film pack. You’ll see the navigation guide displayed on the screen, which is controlled by a four way navigational dial just underneath it.

Pressing the up key adds a frame, the down key adds a digital filter, the left key activates a self timer (two seconds or ten seconds), while the right key lets you switch the flash between auto, forced (always on), or suppressed (always off).

As well as the navipad, underneath the screen, there’s a menu button, a back button, a playback button and a print button.

The menu features a number of different settings which you can change, including switching the AF illuminator on or off (you might wish to switch it off if you’re trying to shoot somewhere discreetly), exposure (the only form of manual control supplied), print settings, bluetooth settings, date and time and so on.

Press the print button when you’re ready to print one of your shots - if you’ve recorded any sound then you’ll be given the option to print it with or without the QR code for scanning with your mobile phone.

At the bottom of the Fuji Instax Mini LiPlay is a micro USB port, which you can use to charge up the camera. The flash on the front of the camera will light up to let you know it’s charging, switching off when it’s complete.

To charge to its full capacity can take up to three hours, but once it is charged, the camera is able to print up to 100 images from a single charge. Of course, if you’re using it to take pictures as well, the power will run out sooner.

The Instax Mini LiPlay is designed to work with a companion smartphone app, which is available to download for free. You can connect to the LiPlay via Bluetooth, and for the most part it connects quickly and seems to remain stable once the initial connection and setup has been completed.

From the app you can perform a number of useful functions, including taking remote control of the camera (useful for selfies and group shots). You can also play back the sounds you’ve “printed” here too.

Most useful is the “direct print” option, which allows you to print any image which you have stored on your phone. This effectively turns the LiPlay into a portable Instax Mini printer, and is a great way to use to print better photos than the onboard camera is capable of capturing.

This also marks it as a point of different from the Instax SQ10, which only allowed you to print photos captured by the camera itself.

Once an image has been printed out, you’ll need to allow some time for the Instax film to develop - in other words, don’t be alarmed when it pops out completely white. After a few minutes, the colours should have fully rendered.

The print slot is found at the top of the Instax Mini LiPlay, so make sure it is unobstructed when you press the print button. A nice quirk is that the camera display will show a graphic of the print coming out from the screen.