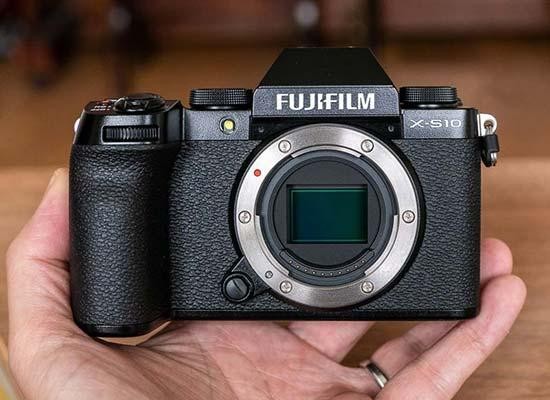 It's a clear attempt to attract a brand new audience to Fujifilm cameras, who may previously have been put off by the more complex design and larger size of models like the X-T4 and X-Pro3.

The new Fuji XS10 is billed as the ultimate all-rounder that offers something a little bit different to the Fujifilm norm.

Although they look quite different and occupy different price-points, the XS10 and flagship XT4 / XPro3 actually share a lot of similarities when it comes to their core specifications and features.

In terms of its marketing position, it sits above the X-T30 and below the X-T3 and X-T4 in the current X-series range.

The image sensor used in the X-S10, the X-T4 and the X-Pro3 cameras is exactly the same - they all use the very latest 26 megapixel APS-C sized BSI X-Trans sensor.

So now Fujifilm are offering you not one, not two, but three different ways to achieve exactly the same image quality.

Physically it sits between the X-H and X-T series, looking like those two camera ranges have been merged together to create the new X-S series.

The design of the body and controls is by far the main difference between the XS10 and the XT4.

The new X-S10 is much smaller and lighter than its big brother, and purposedly has a much simpler interface in order to try and make it more appealing to less experienced users.

If you've ever considered a Fujifilm camera but been put of by its plethora of manual controls - something that admittedly a lot of people love with a passion - then the new XS10 will certainly be more up your street.

Instead of the ISO dial, Shutter Speed dial and Exposure Compensation dial found on top of the X-T4, there's just a customisable Function dial on the left and shooting mode dial on the right of the top of the XS10.

And the rear of the X-S10 is slightly simpler too, with the X-T4's D-pad completely disappearing in favour of a more touchscreen reliant interface.

This reduction in the complexity of the controls means that the XS10 is smaller than the X-T4.

The Fuji X-S10 has an impressively large hand-grip for such a small camera, which is the direct result of the battery being moved into the grip to accommodate the new IBIS unit.

It's big enough to wrap three fingers of your hand around, with your right forefinger operating the shutter button.

The large grip helps to make the camera more stable when paired even with one of Fujifilm's larger telephoto lenses.

Despite being so small and light, the X-S10 offers a very impressive level of build quality – much better than the X-T200, for example - something that we didn't expect from what is after all a sub-£$1000 camera.

An added bonus for some people is the inclusion of a built-in pop-up flash, something that the more pro-oriented XT4 doesn't have.

The only main concession to the more aggressive price-point from a build quality point of view is the complete lack of any weather-sealing - if this is a must-have feature, then you'll need to step-up to the X-T4.

Despite being substantially smaller and lighter than the other two Fujifilm cameras that have IBIS, the X-H1 and X-T4, the new XS10 still manages to squeeze in a very good stabilisation system.

This is the first time that in-body image stabilisation (IBIS) has been incorporated into a mid-range Fujifilm body.

The first Fujifilm camera that had this feature was the now discontinued X-H1, which was launched back in 2017 to not-so-popular acclaim, mainly because it was much bigger than other X-series cameras in order to incorporate the IBIS unit.

Fujifilm's engineers were then hard at work in the intervening three years and managed to drastically shrink the IBIS unit in the X-T4, making it 30% smaller and 20% lighter than the one in the X-H1.

Now with the new Fuji X-S10, they've shrunk the IBIS unit even further still, once again making it 30% smaller and lighter, but this time compared to the one in the X-T4.

The only slight drawback to this impressive size reduction is a modest reduction to the amount of stabilisation that's on offer.

The 5-axis system in the X-T4 provides up to 6.5 shutter steps of compensation, whereas the one in the X-S10 tops out at 6 stops.

This is still half a stop better than the 5.5 offered by the X-H1, though, which is no mean feat given the overall size of the new camera.

The XS10 has a simplified interface that has been designed to be less intimidating to new users who don't already have a vested interest in the Fujifilm X-series system, or to those who don't appreciate manual controls as much as a simpler, more streamlined control layout.

So the X-S10 has a much less complex top-plate compared to the usual array of manual controls that Fujifilm include on their higher-end cameras.

Instead of the ISO dial, Shutter Speed dial and Exposure Compensation dial which adorn the top of the X-T4, there's a Function dial on the left of the X-S10 which by default changes the film simulation mode, and a traditional PASM dial on the right.

Fujifilm have made some improvements on the XS10 to their almost legendary range of film simulation modes and to the beginner-friendly automatic shooting modes.

The new Eterna Bleach Bypass film simulation that first made its debut on the X-T4 has also now been included on the X-S10.

As well as being able to quickly select one of the 18 film simulations using the Function dial, you can view a short description of each one by pressing the Q button.

There's also a brand new algorithm for the Auto and Scene Position shooting modes, where the camera will attempt to automatically improve a landscape image, for example, by applying the clarity control and colour chrome blue to enhance the sky.

There's a new Auto film simulation mode, which chooses between Provia, Velvia and Astia, depending on the scene.

For the very first time, Raw files can be recorded in the Auto and SP shooting modes - previously only Fine or Normal JPEGS could be selected.

The X-S10 impressively offers no less than four Custom shooting modes on the PASM dial, and even better than that, you can choose to store AF/MF and shooting settings in each mode as well as the image quality setting, making it easy to setup different custom modes for different shooting scenarios/techniques. Note that this only works for stills, not movies.

Importantly the X-S10 still offers both front and rear command dials, though, which along with the customisable Function button smake it easy to quickly change the shutter speed, aperture and exposure compensation, depending on which shooting mode you're currently using.

Fujifilm still believe that a built-in flash is an important feature on their lower-mid tier cameras, so the new X-S10 comes with a pop-up flash that's activated by a switch on the left of the top-panel.

Also found on top of the camera are the ISO and Quick Menu buttons, along with a one-touch movie record button and the shutter release button, encircled by the On/Off power switch.

Turning to the rear of the XS10, once again the control layout is simpler when compared to the X-T4.

Despite the lack of traditional Fujifilm manual dials, the X-S10 still provides more than enough controls for the enthusiast user, as well as a simpler interface for beginners.

The unmarked View Mode, AEL and AF ON buttons all double up as customisable Function buttons, while the 8-way AF joystick is a great addition to a mid-range camera.

The X-S10 offers 8fps continuous shooting when using the manual shutter, increasing to 20fps when switching to the electronic shutter without any crop, or 30fps with a 1.29x crop applied.

The electronic viewfinder (EVF) is a 2.36M-dot unit with 0.62x magnification, 100fps refresh rate and a built-in eye sensor. It's exactly the same as the one found in the X-T30.

In comparison, the X-T4 has a more detailed 3.68M-dot OLED electronic viewfinder with larger 0.75x magnification, 100fps refresh rate, and a built-in eye sensor. It's easier to use for glasses wearers because of its larger size and built-in eye-cup, which the X-S10 lacks.

The X-S10 has a 3-inch 1.04M-dot vari-angle LCD screen that can be tilted out to the side and rotated forwards, and also folded against the back of the camera to help protect it when not in use.

What differs between the XS10 and XT4 is the resolution of the screen - 1.04M-dots versus 1.62M-dots respectively - which gives the X-T4 a slight edge.

The X-S10 has a pretty good movie mode that more than holds its own against its main rivals.

It offers a highest quality rate of DCI 4K/30p with no crop recorded in 4:2:0 8-bit internally and 4:2:2 10-bit via the micro-HDMI port to an external recorder.

The F-Log profile is available, and movie compression is Long GOP only, with no All Intra option.

The maximum recording time is 30 minutes, which is actually 10 minutes longer than on the X-T4.

The Fuji XS10 also has the 1080p/240p 10x slow-motion mode, first seen on the X-T4, and the same digital image stabiliser which works in conjunction with the in-camera and lens-based systems.

Other key video features include IS Mode Boost, dedicated movie recording mode accessed by the shooting mode dial on top of the camera, different Main menu and Quick menu systems for stills and video modes, a 3.5mm MIC socket and a USB-C to headphone adapter provided in the box.

Finally the X-S10 has a brand new video feature never before seen on a Fujifilm camera - a count-up clock that displays the card capacity in hours and minutes when the camera is in Standby mode, which switches to showing the recording time in minutes and seconds in the Record screen.

So the main differences between the XS10 and the X-T4's video mode are the maximum frame rate in 4K - 30fps versus 60fps -, the movie compression - Long GOP versus Long GOP/All Intra -, the internal bit rate - 8-bit versus 10-bit -, and the recording time - 30 mins versus 20 mins.

The new X-S10 has exactly the same hybrid autofocus system with phase detection and and contrast detections points as the X-T4 and X-Pro3.

The AF mode can also now be selected when using the Auto and SP shooting modes, with a choice of single point, zone and wide (previously only wide was available).

Perhaps unsurprisingly given its size, the Fujifilm X-S10 only has a single SD UHS-II memory card slot, rather than the X-T4's dual card slots.

So the location of the memory card on the XS10 is less convenient and the single memory card slot is less flexible and offers less peace of mind than the dual slots on the XT4.

This offers a CIPA-rated battery life of up to 325 shots on a single charge when using the LCD screen, compared with 500 for the XT4.