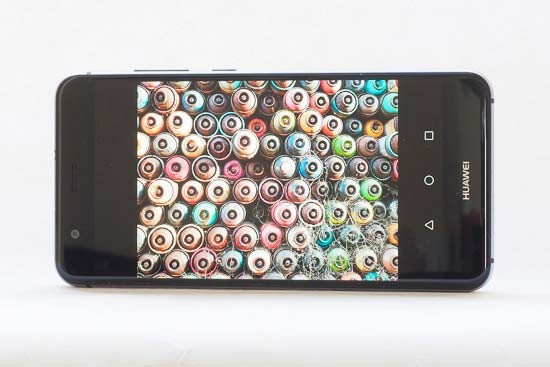 The Huawei P10 Lite is a budget version of the main Huawei P10 flagship smartphone. It shares some of the same specifications of its sibling, but it is available to buy at a cheaper price. We’ll be taking a look at how the Huawei P10 Lite’s camera performs. It features a 12-megapixel rear-facing camera, which is joined by a front-facing 8-megapixel selfie camera. Unlike the main P10 camera, the Lite doesn’t have a dual-lens set-up, and, there’s no mention of co-engineering with Leica. Other specifications which are likely to be of interest to the photographically minded is the fast-charging battery, and the 5.2-inch Full HD display. The device we have been working with has been loaned to us by Vodafone, who you can order the Huawei P10 Lite with. The Huawei P10 Lite costs around £269 sim free.

The Huawei P10 Lite is a mid-range phone, and in terms of sizing, it also sits somewhere in the middle too. With it’s 5.2-inch screen it’s larger than something like the iPhone 7 (4.7-inch screen), but it’s smaller than some of the “phablet” devices which are currently available. This means that you can use it one-handed quite easily if you’re using the keyboard for texting and so on.

As is common for modern smartphones, the Huawei P10 Lite uses quite a minimalist design. It’s available in four colours; sapphire blue, midnight black, pearl white and platinum gold. We have been using the black model for the purposes of our review. The edges of the phone are nicely curved for an attractive look, while the metal frame makes it feel higher quality than the price point suggests it might be.

In order to charge the Huawei P10 Lite, you use a micro USB charging cable (supplied). The P10 Lite features fast charging which means that with just a 10-minute charge you get enough juice to watch 2-hours worth of video. It takes just 90 minutes to completely charge the battery to 100%. You can also use the micro USB cable to plug the phone into your computer for transferring images across. You will need the free Android transfer software for your computer to get images across, which is very easy to use.

On the side of the Huawei P10 Lite there’s a slot where the SIM card goes, but there’s also space here for a Micro SD card, enabling you to boost the internal memory capacity of the phone. You will need to use the special tool provided in the box (or a paper clip if you lose it), to access the port, so it’s unlikely you’ll be taking the memory card in and out of the phone with any regularity.

The other side of the Huawei P10 Lite sees the on/off button, as well as the volume rocker switch. You can use the down button in conjunction with the camera. You have the option to press it down twice while the screen is off to launch the camera app - if you prefer you can even have it open and take a photo automatically. Alternatively, once you’re in the camera app, the down button can be used to take a shot.

Another way to open the camera app is from the main screen - you can swipe up from the bottom corner if the phone is locked without having to unlock the phone. You can take photos, but you’ll only be able to view those which you have taken in this session unless you unlock the phone fully.

The camera app itself is well-featured, giving you lots of options. If you swipe left, you’ll be able to choose between the different camera modes available. The standard “Photo” mode is a fully automatic option which suits most situations, or beginner photographers. There is a “Pro Photo” option which is likely to be appealing to enthusiast photographers. If you select this option, you’ll be able to make a number of changes to different shooting parameters, displayed along the bottom of the screen. There’s the ability to change ISO, shutter speed, exposure compensation, AF mode, metering and white balance. The only thing you can’t change here is aperture, which is somewhat of a shame. Still, it’s nice to have options at all. Unlike the more advanced P10 camera, the Lite doesn’t give you the option to shoot in raw format, which may be disappointing to some, but is unlikely to bother the average smartphone user.

After you’ve changed any or all of these parameters, if the image doesn’t look right, you have the option to return everything to automatic or default settings by tapping an icon in the corner of the screen. It’s a good way to quickly start again without having to change everything individually.

Further at the bottom of the screen you’ll see three icons, in the middle is the photo button - you can use this as an alternative to using the physical down button on the side of the camera. To the right of this icon is the video icon, which you need to press to switch to video recording - the Huawei P10 Lite maxes out at full HD rather than 4K.  To the left of the central icon is an icon which you can use for playing back your images.

If you’re shooting in the automatic Photo mode, you’ll see that there are some options displayed at the top of the screen too. You can switch the flash on and off, adjust the level of skin smoothing, add a filter, and switch to the front facing camera. Other shooting modes available from the left swipe menu include video, pro video, HDR, time-lapse, panorama, light painting and all-focus. The last option is interesting as it gives you the ability to change the focus point after you’ve taken the shot - it’s quite a fun feature which is perhaps more of a party trick than something you’ll  want to do often, but it’s impressive for close-up shots where there’s a shallow depth of field displayed.

Swiping right on the Huawei P10 Lite's main camera screen also reveals some settings which you can change. These change depending on the shooting mode you’re working in, but generally include options to change photo or video resolution, switching sounds off, switching the timer on, and so on. You can also switch on “capture smiles”, which means the shutter release will automatically be triggered if the phone detects someone smiling in a shot.

Tapping different points on the screen in the main camera app changes the autofocus point, but also changes where the camera meters from. That means if you tap on a dark area of the scene, the exposure will change to accommodate for that. The same thing happens if you tap on a bright part of the scene. If the scene is of high contrast, try your best to tap on a part somewhere in the middle to try and get both shadow and highlight detail.

Overall, it’s a pretty easy camera app to get to grips with - especially if you have used an Android phone before. It doesn’t take too long to navigate around the various different options available. You can also use the camera within other third party apps, such as Instagram.

Once the Huawei P10 Lite is switched on, camera start-up time is made quick by the fact that you can access it directly from the start-up screen. Autofocusing speeds are good in bright light, with a little hunting taking place in very low light conditions.