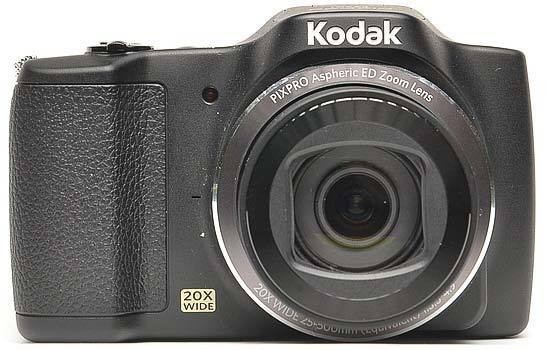 The Kodak PixPro FZ201 is a fairly small (109.7×69.6×38.3mm) compact camera featuring a sixteen-megapixel, 1/2.33-type CCD sensor and a stabilised 20x optical zoom lens. Designed to look a lot like a miniature SLR, the Pixpro FZ201 is actually a lightweight shooter that weighs in at a mere 202 grams. Powered off, with its lens retracted for storage, the Kodak FZ201 easily fits into most jacket/coat pockets and belt pouches, making it easy to carry around even on long journeys and tedious hikes. Switch on the camera, and the lens extends in approximately two seconds; a good performance given the massive focal range on offer. The lens goes from 4.5mm to 90mm, which is equivalent to 25-500mm in 35mm terms. It's worth noting that in most interchangeable-lens systems, you would need a minimum of three (usually more) lenses to cover this range. Low-light focusing is aided by an AF assist light located top left of the lens surround (if viewed head on).

The camera has a somewhat smallish but decently sculpted, textured hand-grip, which provides a surprisingly secure hold and a good resting place for your fingers. The shutter release is in a natural location for your index finger, with the tactile (if plasticky) zoom lever surrounding it. Right next to the shutter release is a small but clearly marked power button. On the other side of the FZ201's top deck is the shooter's built-in flash, which can be popped up manually using a tiny spring-loaded button on the rear plate of the camera. There's no hot-shoe, so the only way to sync up an external flashgun with the camera is to use an optical slave (of the variety that isn't fooled by the pre-flashes emitted by the built-in unit). Unlike some bigger and more expensive superzooms, the Kodak PixPro FZ201 does not feature an eye-level electronic viewfinder, either.

This means that the pictures can only be composed on the 3” TFT monitor that occupies most of the camera's rear plate. Offering a resolution of 230,000 dots – which is fairly low for a screen of this size – this is a no-frills, fixed display with no touchscreen functionality or any other bells and whistles. The monitor's outdoors visibility is mediocre, and it does not help matters that the camera dims the screen after only a few seconds of idleness, presumably in an effort to conserve battery power.

To the right of the screen is a group of controls including a menu button, a four-way navigation pad with a centred SET button, Playback and Mode buttons. The camera also has a comfortable, textured thumb rest and a conveniently located, dedicated movie shutter release. A handful of functions, including flash mode, display setting and self-timer/macro modes are mapped unto the four-way pad, but that's all as far as hardware controls are concerned. This means there are no direct-access buttons for white balance, ISO speed, metering or drive mode – these, alongside other shooting parameters, can be accessed via the camera's Menu and SET buttons (in selected shooting modes). The Playback button can be configured to act as a secondary power button when all you want to do is review the pictures and videos stored on the memory card or the camera's internal memory.

The available shooting modes – accessible by pressing the Mode button – include Auto, Manual, Portrait, Movie, Panorama and Scene modes. The only difference between the Auto and Manual options – the latter of which is a bit of a misnomer – is that the “Manual” mode gives you access to white balance; colour effects including Normal, Black-and-White, Sepia and Vivid; ISO speed; exposure compensation and slow shutter speeds (which come in handy when shooting at night, for instance). On the other hand, exposure metering, image resolution, optical image stabilisation, continuous auto focus, AF mode and drive mode can be adjusted in Auto mode too. In Portrait mode, the camera optimises focus and exposure for the subject's face, and strives to produce the most realistic skin tones possible.

The separate Movie mode might seem redundant given that there is a dedicated movie record button which enables you to start filming at any time, irrespective of what shooting mode you are in; but entering this specific mode gives you more options to fine-tune your video settings. Panorama mode allows you to take 4 consecutive shots that are then automatically stitched in-camera to produce a 180-degree panoramic image. A semi-transparent overlay of the last frame is presented in order to aid you in lining up the next shot. As far as scene modes are concerned, there are 21 on offer, including Landscape, Sport, Beach, Sunset, Fireworks, Night Landscape, Snow, Children, ID, Glass, Photo Frame, Panning Shot, Night Portrait, Fisheye, Party, Indoor, Leaf, Museum, Night Portrait, Sketch and Auto Scene.

Due to the inherent properties of the camera's CCD sensor, the Kodak PixPro FZ201 is limited to recording 720p HD videos, at either 30 or 15fps. A storage-space saving VGA movie mode (640x480 pixels @ 30fps) is also available. Both the optical zoom and the image stabiliser function can be used during movie recording, and the auto focus system will try its best to keep the subject in focus – although its efforts aren't always successful. Sound is recorded via the camera's small monaural microphone, which is located left of the lens surround.

Among the Pixpro FZ201's drive modes we find a variety of options to capture time-lapse sequences. The camera can be set to take a photo every 30 seconds, every minute, every 5 minutes or every 10 minutes. Do note that each frame in the sequence is saved as a separate image, i.e. the frames are not automatically combined into a time-lapse movie. In continuous shooting mode, the camera can capture photos at a rate of about 3 frames per second.

Once you have taken a photo, the Kodak PixPro FZ201 offers an average set of options to edit it in-camera. Using the Playback menu, you can rotate or crop the image, add a colour effect, perform post-capture red-eye removal, or apply an HDR effect. The latter is akin to Shadow Adjustment on Olympus cameras or post-capture D-lighting on Nikons. The resulting picture, which usually offers improved shadow detail, is saved alongside the original. One downside to spending too much time – read: more than ten seconds – in Playback mode is that the camera will retract the lens completely into its housing, which is frustrating not only because it's a noisy affair, but also because the camera won't remember the last zoom setting, so when you return to Record mode, the lens will be invariably reset to the 25mm equivalent focal length.

Perhaps the biggest issue we encountered while testing the camera out in the field was centred around the shooter's auto focus performance. With the lens set to the 25mm equivalent zoom position, focus acquisition is quite zippy and positive – but as soon as you zoom in a notch, the AF system slows down markedly, and focus hunting raises its ugly head. At the telephoto end, focus acquisition becomes an entirely hit-and-miss affair even in good light, leading to missed opportunities. Sometimes the subject would go in and out of focus with the FZ201 being unable to lock focus on it. In other cases, the camera would give a false focus confirmation when the subject was in fact way out of focus. While we do understand that the Kodak PixPro FZ201 is a budget-friendly camera that naturally comes with a set of compromises, we believe the AF system of a 2014 model ought to be more reliable than that.

The camera is powered by a removable, 900mAh lithium-ion battery that enables users to shoot approximately 210 photos on a single charge, as per CIPA standards. Once depleted, the battery can be charged in-camera, with the help of a USB cable and included mains adapter. Photos and videos are recorded on SD / SDHC memory cards – and while the FZ201 does not feature on-board Wi-Fi, it does at least support Eye-Fi cards for wireless image transfer.