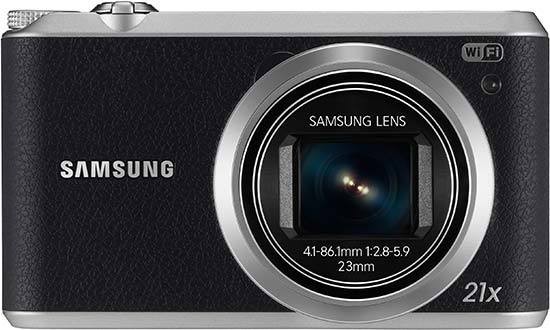 The Samsung WB350F measures a pocket-sized 113.6 x 65.1 x 25mm and weighs a solid feeling but manageable 216g without the battery and memory card fitted. There's no handgrip on the front, just a subtly textured faux-leather surface, which makes it trickier to obtain sharp shots towards the telephoto end of its zoom. A shooting mode dial on the top plate reveals a combined array of not just 'smart auto' settings but manual ones too, the presence of the dial proving a very useful shortcut to most of the key settings.

At the back of the WB350F, in the expected absence of any optical viewfinder, stills and video are composed with the aid of a 3-inch TFT LCD screen, rather than the AMOLED screen on the range-topping WB850F model. With "only" 460K dots, it has less resolution than the WB850F and doesn't have such deep blacks or so much contrast. On a more positive note, the WB350F does have a touchscreen, part of what Samsung have called the Hybrid Touch User Interface. Essentially they're hedging their bets by providing two ways of controlling the camera - either via the screen with a fingertip, or using the more conventional 5-way navigation pad.

With what feels like a higher proportion of metal in the build than plastic, the WB350F's exterior looks the part too, falling somewhere between entry-level snapper and premium snapshot, even if the design execution is fairly conventional. As you'd expect from a camera in its class, from the front the WB350F's lens dominates, the optical housing encouraging a tighter grip should you want to use your left hand to encircle the lens and steady the camera.

Top right of the lens is a small porthole shaped window housing the AF assist lamp/self timer lamp, but other than that the WB350F's faceplate is unassuming. This uncluttered presentation is due, in part, to the integral flash being located on o the top plate where it is now - neatly - of the pop-up variety. If we've one gripe though it does seem to take an age to charge from cold before it can be fired. This wait might not be more than a few seconds, but it can take three squeezes of the shutter release before it will fire off a shot in flash mode.

Looking down on the WB350F's top plate with its backplate facing us, the aforementioned pop-up flash is located at the far left of the top-plate, with a manual switch for its activation provided alongside, so the flash won't automatically fire unless you have raised it first. Give this a nudge with a fingertip however and the flash pops up with a satisfyingly solid metallic clunk. Simply press the spring-loaded contraption back down to deactivate.

Next is the Direct Link button, which can be configured to quickly access one of the six different Wi-fi modes. Just above this is the mono microphone and a small inset power button. Give this a fingernail press and the lens extends from within its body housing to maximum wideangle setting, while the rear screen blinks into life a moment later. This combined process takes roughly 2-3 seconds. Not DSLR quick then, but roughly what we'd expect from a point-and-shoot camera.

A half squeeze of the large shutter release button and a central highlighted AF point appears in green along with the customary confirmation 'bleep' that the user is free to go ahead and take the shot. Do so and in default single shot mode a full resolution, Super Fine (top) quality image is committed to a micro SD card in one to two seconds, which is impressive.

The Samsung WB350F's shutter release button is encircled by a lever for operating the 21x optical zoom; with a nudge from the forefinger the Samsung's Schneider Kreuznach lens mechanics take four seconds to propel the user from maximum wideangle to extreme telephoto. While, once again, it's not the quickest response ever, this was still sufficiently responsive to enable us to quickly frame up the shot we saw in our mind's eye. When shooting video, the zoom takes more than twice as long to move through the same range, no doubt to minimize the already fairly quiet operational buzz. While this is fine, the initial response could be quicker.

The top plate shooting mode dial puts eight options at our disposal. Twist the dial to the subject recognizing 'smart auto' setting and it's point and shoot all the way, the camera getting it mostly right, although - typically - busier scenes can confuse the auto focus and the shutter will still fire even if the image is noticeably soft, so you can occasionally come away with blurred results. No matter, re-compose the shot and simply try again.

The other options on the same dial are the familiar Program mode, which stands alone, plus aperture, shutter priority and manual mode - which are grouped together. Icons for all three are presented on screen so the user just tabs between them to select whichever as required and uses the touchscreen or presses the 'OK' button at the centre of the rear plate command dial/scroll wheel to implement them. Aperture, to take one example, is then adjusted either with a fingertip on the virtual dial, or via the left and right buttons on the navigation pad.

Flick the dial around one setting to Smart Scene mode and a brightly coloured array of 13 options appear on screen. It's within this setting that we find Samsung's familiar zit-zapping Beauty Shot portrait mode and now customary self-stitching panorama option, plus the usual night, landscape, sunset, dawn, beach and backlight settings, along with a possibly less essential text option.

Next is a shooting mode that contains the slightly tacky 'My Magic Frame' (superimposing your shot on a number of mocked up backgrounds, such as a magazine cover or billboard), split-shot mode (whereby the camera will merge a series of three photos to form a single 5 megapixel image triptych), Motion Photo, Photo Filters (which contains 12 creative effects) , Movie Filter and Photo Editor.

The remaining settings on the dial are for the aforementioned Wi-Fi and Settings options. The Wi-Fi options here are many and varied, and include the ability to sync up with a handset in order to use your phone as a remote viewfinder - though this first requires the downloading and installation of Samsung's 'MobileLink' software onto the phone. There's also the ability to let the camera search for a local wireless network in order to directly upload imagery to the likes of Facebook, Picasa, YouTube and the ilk, or connect to a wireless network to email a selected picture to an email account - the address input within the camera with the aid of an on-screen 'qwerty' keypad. Inputting letters is easy thanks to the WB350F's touschcreen. There are further automatic wireless back up (either to your desktop or a cloud service) and TV link options for those who have the relevant tech at their disposal.

With the 3-inch, 460K-dot resolution screen we've already touched on swallowing up a lot of the backplate of the Samsung WB350F, the other controls are shunted over to an inch-wide strip on the right. From the top these include the one-touch video record button. Press the red record button on the camera back and wait a couple of seconds while the 4:3 ratio screen display blanks out and then re-appears showing a narrower 16:9 ratio image before recording begins - by which time the subject you were attempting to frame may well have moved on. Beneath this is a self-explanatory menu button plus, alongside it, the Back button.

Underneath these two buttons is the largest control on the camera back - the familiar four way control pad. At points north, east, south and west on this dial are settings for controlling the amount of information shown on the camera display (including a live histogram if desired), self timer plus burst shooting settings, macro mode and flash settings.

The burst shooting modes include single shot mode and 3fps or 8fps shooting - each to a maximum of eight pictures. This is fine, but if you want to shoot continuing sporting action is less useful, as once you've reached those maximum eight sequential images the camera freezes up while they're being committed to memory.

The final two buttons on the camera back are for playback and delete - again, these are straightforward and explanatory and we always love having the option at our fingertips to immediately delete images rather than having to wade through menu screens to do so. The Delete button doubles up as the 'Fn' (Function) control. Press this and the user is offered an at-a-glance table of 12 key functions, a time saving feature a bit like the Quick Menu toolbar on Panasonic Lumix cameras. Tabbing left or right, up or down this table allows the adjustment of exposure (+/- 2EV), ISO speed (ISO 80-3200), photo size and degree of JPEG compression (16MP, Super Fine being the best), metering, white balance, face detection on/off, focusing (normal, manual or macro), focus area, flash settings, drive/self timer and movie size.

On the right hand flank of the camera, as still viewed from the back, we find a plastic flap protecting ports for AV/USB output, although disappintingly there's no mini HDMI alongside. Just below this is a metal hoop for attaching a wriststrap.

Examining the base of the WB350F, there is a screw thread for a tripod provided slightly off-centre, and alongside this a catch operated compartment holding both the supplied battery and also offering a vacant slot for a micro SD card. The rechargeable battery here - rather annoyingly charged in-camera - is good for 300 shots, which should be enough for a day's shooting.