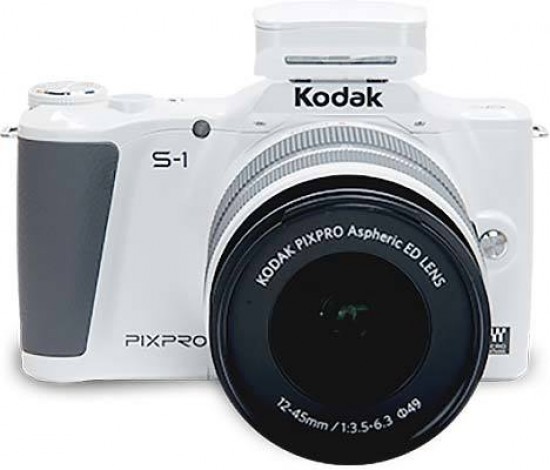 The 16 megapixel Pixpro S-1, the first-ever compact system camera to bear the hallowed Kodak branding, has been much discussed and rumoured in advance of an actual hard sample appearing. A UK/Europe launch took place back in February - that now seems a distant memory - but we only received a production model this summer. At the time, new license holder JK Imaging wasn’t even sure the product would make it into UK stores - though it was already available in the Far East - and was talking about selling it direct to customers online, bypassing bricks and mortar sellers entirely. Previous JK Imaging/Kodak point-and-shoot models (which this isn’t) have gone straight to the big guys like Argos and Tesco.

It’s all been a little vague to date as to when the camera will be available to buy and where you can buy it from, with us sensing the new licensees are finding their feet, but what we do now have is a nice looking, metal build camera in our hot hands that should please both enthusiasts and casual observers with its quality. Which makes it something of a shame that the S-1’s introduction to the market has been so hesitant.

A neat looking package arrived with us that included a glossy white finished Kodak Pixpro S-1, though apparently there is also an all-black version doing the rounds, two compatible zoom lenses, plus a clip-on P10 accessory flashgun, attachable via the vacant hotshoe if you remember (there’s no bulb built in). More of a surprise was that we were also sent a huge SF 400mm f/6.7 fieldscope lens, seemingly ideal for wildlife photographers (or nosey neighbours), though a price/release for this was again to be confirmed. Nevertheless it seems to signify that the ‘new’ Kodak is serious about engaging with the enthusiast market.

Satisfying all framing opportunities between ultra wide angle and extreme telephoto, our Kodak S-1 bundle included the SZ ED 12-45mm f/3.5-6.3 AF, plus SZ ED 42.5-160mm f/3.9-5.9 AF in the box with the camera; so plenty to get us up and running straight away. It’s worth mentioning too that both of these more standard lenses are retractable; i.e they need to be fully extended before you can begin shooting properly. If you turn the camera on having forgotten to first do so, you get an on screen prompt. Obviously this adds a second or two onto the time required to get shooting from cold, and the lenses themselves are less compact than equivalent focal ranges from Panasonic and Olympus, who have had a head start with their own ranges.

Somebody once told us, though, that it’s what’s inside that counts. Obviously a chief point of interest here is that the Kodak S-1 is the first camera outside of either Panasonic or Olympus to adopt the Micro Four Thirds camera system and feature a Four Thirds image sensor, as opposed to the smaller one inch sensor of Nikon’s rival ‘1’ system, or the APS-C chip of Sony NEX/Alpha and most of the Samsung NX range (with the exception of the Samsung NX Mini). That in itself is newsworthy and prompted us to seek it out for further investigation.

Perhaps more so than Panasonic’s GM and GX compacts and Olympus’ Pen models - arguably its closest equivalents - the S-1 resembles a digital SLR that’s been down-sized - or should that be minimized. In our opinion it’s Kodak’s best looking camera to date, with just enough touches to indicate this is a more serious proposition than we’ve seen in a long time, while at the same time looking and handling in an approachable fashion for anyone considering this as a step up from their smartphone’s output. Pricing too is reasonable compared with what’s out there - £349 with one lens, or between £449 and £499 for both, being the package we had to play with.

This fairly priced outlay doesn't get us a built-in EVF that might hold greater enthusiast appeal, but we are provided with built-in Wi-Fi and Eye-Fi card compatibility for sharing shots, plus the creative and framing flexibility of a tilting LCD screen, fast having become an industry must it appears, and not just for entry and mid range models.

From the front then, the S-1 appears familiar yet not too showy, with controls that will be easily accessed by anyone who has even handled a point and shoot camera before. Our arctic white version certainly looks attractive on first glance, but the inclusion of a hotshoe above the lens reassures that this isn’t just all about style.

The top plate also features a pin-head sized power button, a larger, raised shutter release button and, to the right of both, a shooting mode dial, partially inset and positioned where it is easily within spinning reach of the thumb of the right hand when gripping the S-1. This dial includes the usual suspects of Program, Aperture Priority, Shutter Priority and Manual modes, along with a dedicated scene mode setting, Wi-Fi mode, Custom Settings option plus full auto. Whilst the latter is a reliable fall back if you do just want to concentrate on the subject and point and shoot rather than fiddle around with menu options, it is stripped back in that we don’t get the option to shoot Raw in this mode, like we do if turning the dial one notch to program mode for example.

Providing the zoom lens in use has been fully extended prior to powering up, it’s possible to be up and running with this camera in just a couple of seconds, which isn’t bad at all. Squeeze down partially on the shutter release button and the image relayed on the back plate LCD visibly adjusts for a moment. Subsequently squeeze down fully on the shutter release button and a full resolution 16 megapixel JPEG is committed to memory in two to three seconds - again a respectable showing. Turn the camera to one of the creative modes to capture JPEG and Raw file in tandem and happily any difference in writing speed is barely perceptible.

The back plate of the camera is largely given over to the 3-inch, 920,000-dot resolution LCD screen, which like many of its rivals is angle adjustable. Though it cannot be flipped out parallel to the body or turned right around so that it points at whoever is in front of the lens for the selfie obsessive, it can be turned upwards through 90 degrees until you are looking down into it, as on a medium format camera, or angled downwards by 45 degrees to make it easier for those shooting with the camera held up at arm’s length to view the screen. As one would expect given the S-1’s entry to mid level pricing, there is no additional eye-level viewfinder provided here, of either electronic or optical variety. Still, the provision of a tilting screen allows for more creative flexibility than a resolutely fixed alternative, and for that the camera deserves a degree of praise.

With the monitor taking up three quarters of the real estate on the back of the camera, controls are arranged in the final quarter on the right hand side of the back, where they are within easy access of the thumb. With dark grey rubber padding at the front adding a degree of grip on what is otherwise a smooth and potentially slippery body - and the colour here matching the rubberized zoom and focus rings on the matching lenses - this continues around the right hand flank (if viewing the camera from the rear), dovetailing into a narrow strip into which a raised record button for shooting video is provided. The fact that this control is slightly inset largely prevents accidental activation when fetching the camera in and out of a bag.

As one would expect, recording video clips is a nigh-instant one-touch process, capture instigated via a thumbnail press of the aforementioned red button. Upon being pressed the on-screen image ratio narrows to 16:9 format, with black bands appearing top and bottom of frame to ape how the picture will look when replayed on a widescreen TV or monitor. If you want to zoom in or out while filming this is obviously a manual process and requires a twist of whichever lens is in use, just as it does when capturing stills. While this means that we don’t have any mechanised buzz to interfere with or distract from on the (stereo) audio track, it requires a degree of skill on behalf of the user to keep transitions smooth and steady rather than lurching. Here auto focus kicks in almost immediately framing has been changed mid flow, the camera gradually adjusting once you have come to a stop. Inevitably this can result in a few seconds of softness before the frame gradually drifts back into sharp(er) focus.

Other than the above, as regards the rear of the camera, we’re further presented with a familiar multi directional control pad on the back plate that also doubles up as a scroll wheel, its use dependent on whether you prefer to tab through or scroll through camera settings and/or captured images. This is flanked above and below by a pair of small buttons just marginally larger than the one for turning the camera on. The top two are for summoning up the S-1’s menu options and playing back images and video, while the bottom two are function buttons marked ‘Fn1’ and ‘Fn2’ but which in playback mode double up as a means of enlarging a portion of the image in-camera or deleting it respectively.

Picture effects, including the usual toy camera- corner shading ‘vignetting’ option, can be attributed to the ‘Fn1’ function button, enabling their selection to be a one-touch process. This being a model bearing the Kodak branding we also get a couple of effects harking back to the days of Kodak film into the bargain: namely Ektachrome, Kodachrome and Kodacolor options, selectable for stills shooting, but not for video too.

Unusually, on the aforementioned scroll wheel, at various points we are given a means of variously locking automatic focus and/or exposure, selecting self timer (10 or two seconds) or continuous burst shooting, or pulling up or taking down image capture info on the screen, as well as calling up a compositional grid overlay. Here we don’t get touch screen control however which may have made the camera more intuitive still, but we have to remember that this is a first generation release.

The rubberized right hand flank of the camera - if still viewing it from the rear - is where we find a flap covering an HDMI out port and separate USB port. This is also the means by which the S-1’s lithium ion battery is charged within the camera, with a USB lead plus suitably equipped adapter plug provided for this purpose. The far left flank’s only feature meanwhile is a built-in audio speaker, for replaying the sound captured by the stereo microphones positioned just above the lens at the camera’s front.

The base of the Kodak Pixpro S-1 features a centrally positioned screw thread for attaching the camera to a tripod, as well as shared compartment for both lithium ion battery and removable media card - here the common SD/SDHC variety. There is also a very small internal memory that allows for the capture of literally two high resolution JPEGs right out of the box. The S-1’s LV-070 battery offers around 410 shots from a full charge according to the official blurb, which is better than the performance of most competing CSC’s in its price bracket, which typically manage circa 300 images before the battery is spent.

But what of the images that the S-1 produces - do they transcend what we’d expect from an initial effort and match those from Panasonic and Olympus models with the same sensor set up? Moreover, do they make this Kodak model a worthy investment for anyone trading up from a smartphone with the hope of more ‘professional’ looking images?