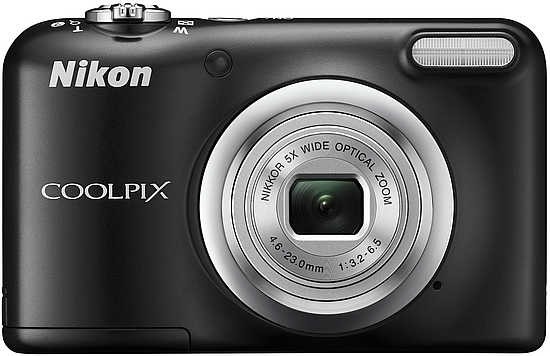 The Coolpix A10 is Nikon’s cheapest Coolpix camera, boasting an RRP of just £59.99. For that you get a 16.1MP CCD sensor fronted by a 5x optical zoom lens with an equivalent focal length of 26-130mm. The A10 will shoot 720p HD video and features six creative effect filters, as well as Nikon’s Smart Portrait mode for enhancing shots of friends and family. The ergonomic easy-grip design comes in four body colour options and each is powered by a pair of AA batteries.

The first thing that strikes you about the Nikon Coolpix A10 is its power source. Where the vast majority of compact cameras are fuelled by rechargeable Li-ion power packs, the A10 uses a pair of conventional AA cells. Nikon’s Coolpix L840 is the same in this respect, and it’s a good way for Nikon to keep costs down. It’s also useful when you’re away from the mains and run out of power, and if you refuel the A10 with lithium batteries, Nikon claims it’ll snap a very impressive 700 shots, although standard alkalines are rated for a more mundane 200 shots. For every day usage, it’d make sense to invest in some rechargeable NiMH batteries to avoid throwing money away on single-use cells. Nikon recons NiMH rechargeables will manage a healthy 500 shots per charge, however their added cost does make the A10’s low price slightly less attractive. Another issue with AA battery power source is that the batteries and SD card share the same compartment, so when you go to change cards, the batteries can easily fall out if you’re not careful.

Elsewhere, the Nikon Coolpix A10 is very easy to use and refreshingly ergonomic when compared to slimmer cameras, and especially wafer-thin smartphones. The pronounced finger grip doesn’t have a rubber coating, but the camera’s fairly light 160g ready to shoot weight means it never feels prone to slipping from your hand. A textured thumb rest on the back, along with the raised video record button alongside it, help the camera feel extra secure. Whether or not the A10 would withstand a drop is another matter, as while the all-plastic casing doesn’t flex or squeak, it does feels cheap.

But the most obvious sign of exterior cost-cutting is the 2.7-inch, 230k-dot LCD screen. Its resolution is the minimum you’ll find on a camera these days, and it causes menu icons and fine detail to look pixelated. The screen’s contrast accuracy is even worse though, thanks to extremely limited viewing angles that mean you’ll need to be looking at the screen from exactly the right angle to correctly judge exposure. It’s particularly problematic in low light shooting, where shadows are displayed as large back areas and highlights easily burn to white.

Another frustrating aspect of the Nikon Coolpix A10 is its speed, or rather the lack of it. Where we’ve grown used to cameras letting you immediately view a shot after capture, the A10 requires a frustrating 3-4 seconds of processing time. This is symptomatic of a deeper issue with the camera, which is that – despite the new model number – it’s actually several years old. The A10 is identical to 2015’s Coolpix L31, which itself was the same as the L29 that preceded it. This could be seen as Nikon playing dirty, but given that smartphones have made conventional compact cameras a dying breed, it’s small wonder that Nikon isn’t investing big bucks into this section of the camera market. It’s actually surprising Nikon is even producing budget compact cameras at all, as some manufactures have simply stopped making them.

It’s therefore small wonder that the Nikon Coolpix A10 doesn’t pack many fun or fresh features. Aside from its HD 720p video recording capability and six creative effect filters (see the Image Quality section of this review for samples), the only other point of interest is Nikon’s Smart Portrait system. Sadly the A10 has only been given a cut-down version that’ll only soften skin and enable the self-timer to snap a shot when the camera detects a smiling face. There’s one other trick that the A10’s Smart Portrait system can pull, and that’s Blink Proof, which uses face detection to alert you should someone in shot be blinking. The A10 doesn’t pack Nikon’s Glamour Retouch face enhancement effects which usually accompany Smart Portrait.

The Smart Portrait system is activated by selecting it from the mode menu using the Scene button on the rear panel. The mode menu also includes the default Scene auto selector shooting mode, along with a standard Auto mode that lets you take control of white balance and ISO sensitivity, as well as activate continuous shooting. The camera’s creative effect filters can also be accessed from the mode menu, as can fifteen user-selectable scene presets. Unfortunately these don’t contain a sweep panorama mode, or even the Panorama Assist setting that Nikon includes with the Coolpix A100.

Whether you’re in the all-singing all-dancing Scene auto selector mode, or plain Auto mode, you’re able to adjust image size and quality, and also apply up to +/-2EV of exposure compensation using the rear panel button that doubles as the right directional control in playback mode. The left directional button activates the self-timer, although only a 10-second delay option is available, while the up button gives you a choice of various flash modes, including a red-eye reduction option.

Despite the slow image processing, the Nikon Coolpix A10 powers up and snaps a shot in an adequate 2.7 seconds. Of course, you’ll have to wait at least the same time again to view the shot, and if you’re shooting in low light, the A10’s autofocus system will require a couple of seconds to find its mark. The camera usually indicates accurate focussing no matter what the conditions, however we encountered a disappointing number of shots that actually turned out to be out of focus.