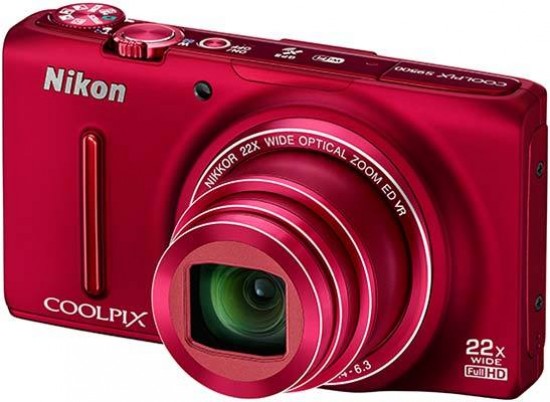 The image goes through the lens onto an 18 megapixel back-illuminated CMOS sensor. The main difference between CCD and CMOS is that CCD yields a sharper image but a CMOS is more fuel efficient meaning your battery will last longer. The back-illuminated system describes the design of the CMOS. On a standard sensor, the pixels are surrounded by micro-circuitry which takes the information to the processor. The circuitry partially blocks the pixels meaning less light is collected. A back-illuminated sensor has the circuitry on the reverse so if you were to look at it mounted in a camera, it looks like it's on backwards. The lack of circuitry on the front means that more light can be collected theoretically making the sensor perform better in low light.

On the top of the Coolpix S9500 Nikon have opted for a more traditional command dial for switching through the various modes that the camera has to offer. There are eight modes: Auto, Effects, Smart Portrait, Backlighting, Night Portrait, Night Landscape, Scenes and Scene Auto Selector. The latter is an option that will analyse the frame when you compose and select the correct scene mode for that composition. The Effects are accessed by pressing the menu button when the mode is selected on the dial. The options are Soft, Nostalgic sepia, High-contrast monochrome, High Key, Low Key and Selective Colour.

The shutter release button is flush with the zoom rocker that wraps around it. A small power button sits between the shutter button and the stereo speakers. Note that this particular model does have built-in GPS like its predecessor, the S9300 - you can save money if you don't want the GPS by choosing the S9400 model. If you've never used a GPS system with a camera before, it works by corresponding the time and date of the camera with where the GPS says it was at that time. You can then upload these pictures to Google Maps.

In the GPS menu, there are plenty of options. There are 6 initial options in the menu and these can be drilled into to expand your options. In GPS options, you can switch GPS on and update the profile. Points of interest can be added and you can also record logs of GPS data in 6, 12 and 24 hour periods. Synschronize lets you manually synchronise the camera's clock, while the last option is something that can provide useful if out walking. It places a compass on the screen so you can keep track of the direction you're travelling in.

For the travelling photographer, storage of the pictures can be problematic. Do you get several smaller cards in case of card corruption, or get just one big card in case you lose one? The S9500 has built-in wifi, so you don't need to worry. Once you're in a free wifi zone, the camera will send your pictures to a place of your choosing such as your computer or smartphone - you can also control the camera directly from your smart device using the Wireless Mobile Utility app, with the abilty to set the zoom and timer. The camera also works with Eye-Fi memory cards.

On the back of the Coolpix S9500, Nikon have added a wheel to the pad for speedy navigation through the menu system. It's not overly sensitive and does require some extra rotating than what should be necessary but it still gets the job done faster than pressing a button. Satisfyingly there's the usual medley of options on the navigation pad for flash options, macro, self timer and exposure compensation. A direct video button will start recording Full 1080p HD film whenever you press the button regardless of the mode you're in at the time.

Being reasonably thick, the build quality of the Coolpix S9500 looks to a higher standard that we suspect it really is. We're not implying that Nikon have cut corners but when it comes to stepped products such as the Nikon L, S and P ranges of digital compacts, you do tend to get what you pay for. This S series camera is in the middle of the ranges so has a good build but isn't as good as the P series.

However, it's worth noting that people buying the S9500 aren't going to be as bothered about top lens quality as long as it takes good pictures. They won't care about a quiet focusing motor or lens operation because they won't be taking pictures of wildlife at 5am in a misty meadow. The people who buy this camera will be going on holidays with the family and want to document as much as possible. The build is perfectly sufficient for that. It's a camera that will be carried around all day so the lighter materials used, the better for the photographer.

There are some nuggets of niceness though. The lens barrel has minimal play in it and the battery door has a lock on it which is nice. However, the door is quite flimsy despite this. The covers protecting the HDMI and USB ports are made of rubber and hang off the camera. A plastic hinged version would've been nicer but is unlikely on a camera at this level.

The Coolpix S9500's main menu will vary dependent on the mode you have the camera set to on the command dial. In auto there's lots of features and the S9500 sticks to the traditional Nikon colours of a black background with a grey menu and yellow highlight bar. Everything is pretty easy to work through. The menu is set into three sections for shooting, movie and set-up. Pressing right will go into the highlighted tab whereas pressing left will go back to the tabs for faster navigation.

We took numerous shots in the shutter lag test and the results were a little disappointing. An average delay from pressing the shutter button to the camera taking a picture once the camera is focused is around 0.08 seconds, but the Nikon Coolpix S9500 took 0.12 seconds. On the rare occasion that this happens, we generally give the camera a chance by testing it for longer than usual in case of user error. After all, this test has human reflexes to take into consideration. But the S9500 gave similar results right through.

Start-up time from pressing the power button to the Coolpix S9500 focusing and taking a picture is just over 3 seconds. That's a little slower than we're used to seeing too, the average being around 2.5 seconds.

The burst mode is on the command dial and after the disappointingly slow performance in the timing tests, we were blown away by comparison. The camera has a burst rate of 7.5fps for 5 frames. It does this precisely: our test started at 0.86 seconds and finished at 1.86 seconds. However, this is offset by the extra 20 seconds or so that it took to download all the pictures to the memory card - which is a shame. Pictures taken in burst are displayed on the camera as a sort of slideshow. You have to press the OK button to play them then scroll through with left and right.

In playback, the Coolpix S9500 shows basic information about the picture such as the file number, date/time and position in the line of pictures on the card. Pressing OK will change the display to a smaller thumbnail and more information such as shutter speed, aperture, ISO and even a histogram. Playback can be accessed from power off by holding the playback button down. In the menu area, there's a few different editing options such as D-Lighting, an auto quick retouch option and the filter effects. These can't be used on the burst images.