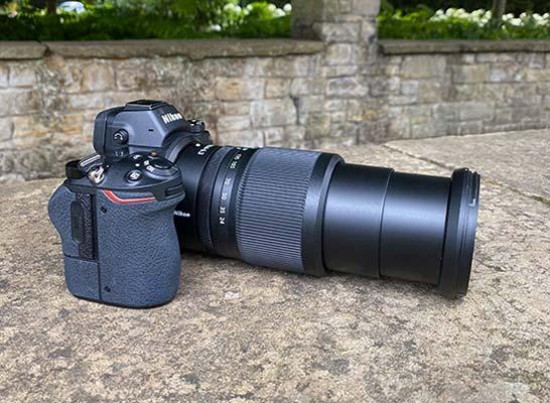 If you're looking for a highly versatile travel or everyday lens, then you will likely be prepared to make some compromises. For the Nikon Z 24-200mm f/4-6.3 VR, the compromise you’re making is that the widest aperture available is relatively narrow, especially once you move past the wide-angle end of the lens.

You also have to accept a little softness at the furthest reach of the lens - though mainly only if you’re examining closely at 100%, otherwise the overall impression of sharpness is very good.

This is an ideal lens for photographers who like to shoot a bit of everything and want one lens which can take on a number of jobs when they want to travel light. With this lens you can shoot landscapes, portraits, wildlife, sports and even macro-type subjects.

What’s more, it also compacts down into a relatively small, light and neat package - though at its full extension it may make smaller cameras like the Nikon Z50 feel a little unbalanced.

The newly announced Nikon Z5, targeted specifically at those just moving to full-frame for the first time, is the perfect pairing for a lens like this as it’s useful for such a wide variety of subjects, too.

Despite the fact that it has a relatively narrow maximum aperture, you can still get some pleasing out of focus areas in your images, while shooting handheld at fairly slow shutter speeds is not too problematic thanks to inbuilt vibration reduction in the lens itself.

The only problem you might encounter is when trying to shoot in very low light at the mid telephoto range onwards - but for travel photographers, how often you're intending to do that is likely to be minimal.

When it comes to price, the Nikon Z 24-200mm f/4-6.3 VR is not a cheap lens by any means, but in terms of value for money, it can save you a fortune compared to buying a set of individual lenses. Especially so for amateur wildlife photographers who are not currently served by any affordable telephoto lenses for Z cameras (the 70-200mm f/2.8 lens will have an asking price of £2,399 when it goes on sale).

In short, this is not a lens which is intended to replace and do the job of other lenses, such as the 24-70mm f/4, or the 70-200mm f/2.8, nor the range of prime lenses Nikon produces for its Z cameras, but if you need something which works well as a catch-all and are happy to live with the compromises it presents, the new Nikon Z 24-200mm f/4-6.3 VR comes highly recommended.