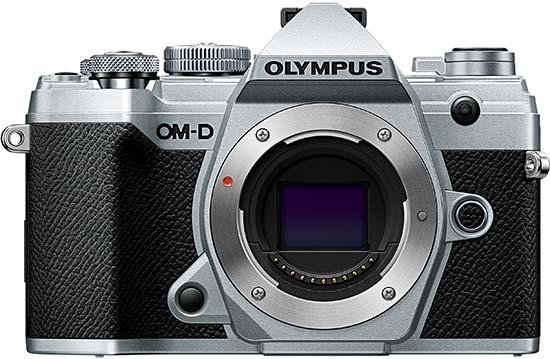 Find out what we thought of Olympus's brand new camera by reading our detailed first impressions...

The Olympus OM-D E-M5 Mark III will go on sale in mid-late November 2019 priced at £1099 / $1199 body only. Various lens kits will also be available at launch, depending on your geographical location. 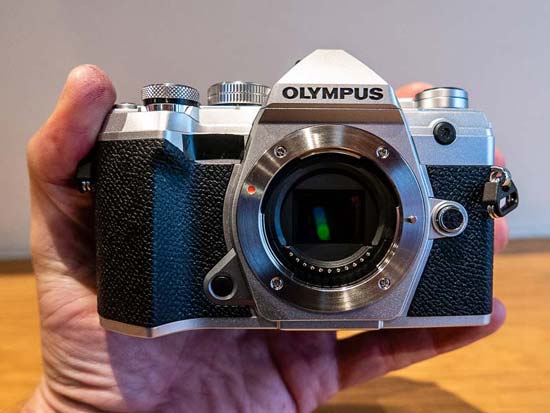 With the marketing strapline "Break free from heavy gear", Olympus are continuing to target advanced amateurs and photographer enthusiasts looking for a discrete, compact camera kit that doesn't break the back or the bank.

The OM-D E-M5 Mark III is a smaller, cheaper alternative to the flagship E-M1 Mark II / E-M1X models, offering many of the same features at a more palatable price-point in a smaller, lighter body. 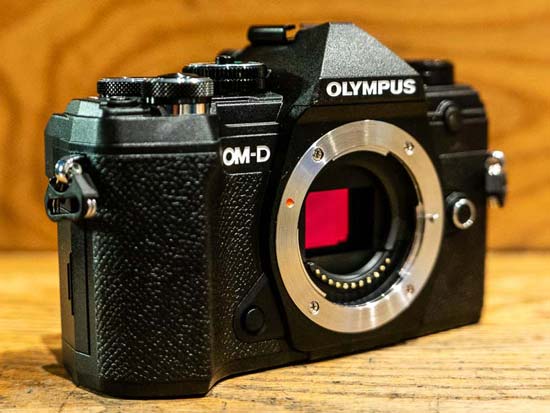 Weighing just 366g and measuring 125.3mm x 85.2mm x 49.7mm, the Olympus OM-D E-M5 Mark III is constructed of polycarbonate to help keep both the weight and price down. 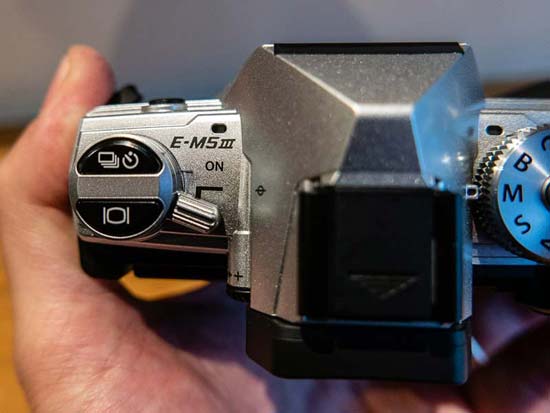 As with many aspects, the control layout of the new E-M5 Mark III more closely resembles the E-M1 Mark II, rather than its predecessor.

On top, only the power switch is in the same place, with the shooting mode dial now on the right and customizable drive and display buttons on the left.

There are fewer changes to the rear, with the principal one being the addition of a dedicated ISO button just above the rear thumb-rest. 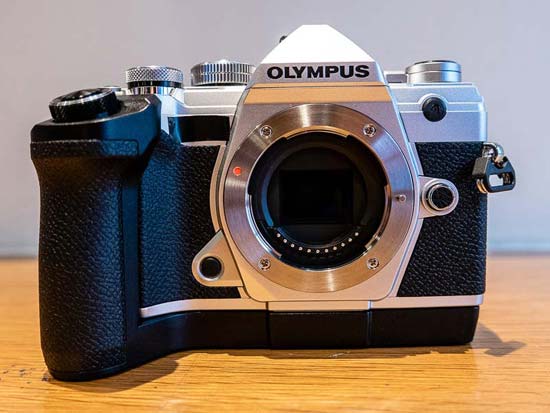 The Olympus OM-D E-M5 Mark III has the same 20.4 megapixel Live MOS sensor and Truepix VIII processor found in the E-M1 Mark II/E-M1X cameras. Consequently the still image quality should be be very similar, if not nigh on identical, to Olympus' flagship cameras.

In addition to stills, the Olympus OM-D E-M5 Mark III is a capable video camera too, offering Cine 4K recording at 24p and 4K 30p recording, plus Full HD 120p slow-motion. It even has a dedicated 3.5mm Mic jack on the body for better sound recording for vlogging.

The Olympus OM-D E-M5 Mark III has a brand new in-body stabilisation system that now offers an improved 5.5EV steps of compensation, increasing to an even more impressive 6.5EV step when using the stabilized 12-100mm lens. 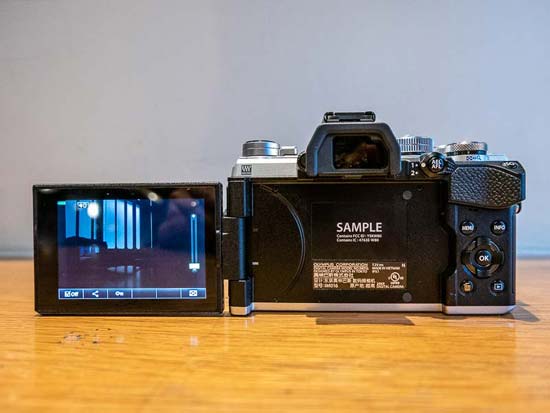 The Olympus OM-D E-M5 Mark III has a versatile vari-angle LCD screen that can be tilted out to the side and swivelled to the front for easier selfies or vlogging. If only every camera had one...

The Olympus OM-D E-M5 Mark III has a dual phase- and contrast-based auto-focus system with 121 points for both - in fact, it's exactly the same system as used on the flagship E-M1 Mark II and E-M1X cameras.

10fps high-speed sequential shooting with full time AF/AE tracking is offered by the E-M5 Mark III, which is slower than the E-M1 Mark II / E-M1 X's 18fps rate but still more than respectable for this class of camera.

This new model also gains the Pro Capture mode from further up the range, which takes 30fps bursts but with 15 of those frames saved before you actually pressed the shutter,helping to ensure that you don't miss that vital moment.

There's also an eyepoint of 27mm that should please glasses wearers - the industry standard is 23mm.

Unfortunately the move to an OLED panel has seen the magnification fall from 0.7x to 0.68x. 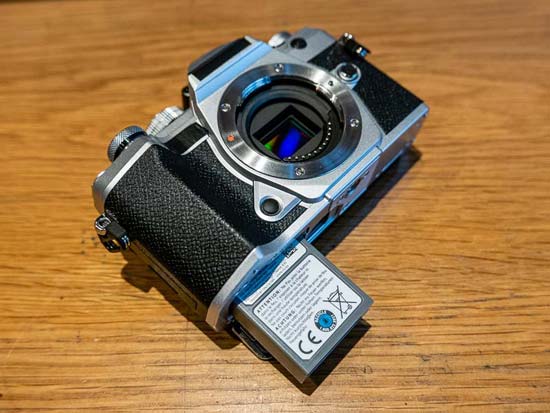 Battery life is OK on the Olympus OM-D E-M5 Mark III. It's officially rated at 310 still images or 60mins of video recording, via a new BLS‑50 Lithium‑Ion battery that's physically smaller than the one used on the Mark II.

You can also charge the camera on the go via the USB port, a great new feature that is appearing in more and more cameras (and rightly so). 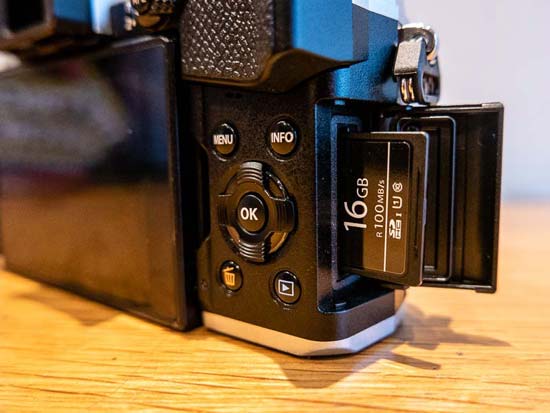 An unfortunate consequence of the Olympus OM-D E-M5 Mark III's compact size is the single memory card slot, rather than a dual-slot system.

Thankfully, it is at least housed in dedicated compartment on the side of the camera, rather than in the same one as the battery on the bottom, which is better news for tripod users.

And even better, Olympus have upgraded the slot's spec to UHS-II, which should help the camera keep up with all those high-speed bursts. It's also not that common in this class of camera, where the slower UHS-I standard is the norm.

The Olympus OM-D E-M5 Mark III is fully weatherproof to the official IPX1 rating thanks to some clever dust-, splash- and freeze-proof sealing. 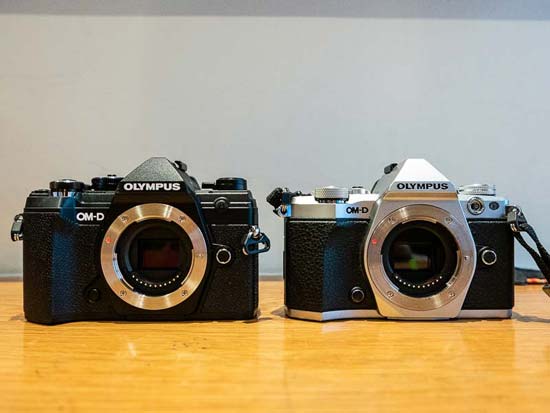 The Olympus OM-D E-M5 Mark III is a well-thought out update of the rather long-in-the-tooth Mark II version, inheriting a lot of features and performance from the more expensive E-M1 II and E-M1 X models whilst improving the user interface of its predecessor. On paper at least it probably offers the best balance of price, size and performance in the Olympus range.

Until we get one in for a full review, why don't you share your thoughts on the new Olympus OM-D E-M5 Mark III by leaving a comment below?

Would you buy one? What do you like and dislike? Does Micro Four Thirds still have a future? Share your opinion now!